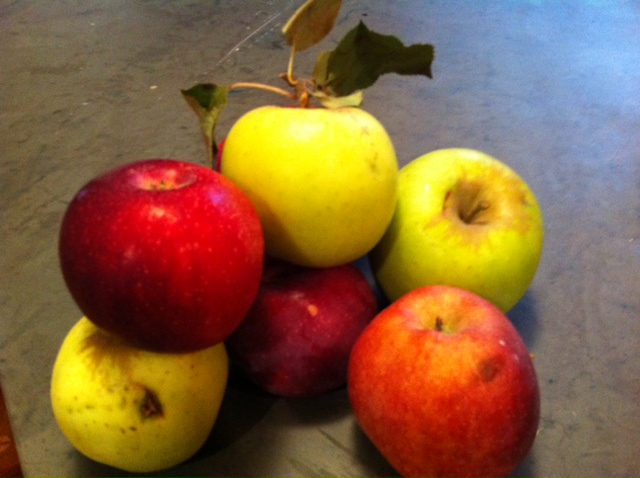 Johnny Appleseed as Bacchus and Biodiversity of Apples

It’s interesting that we view Johnny Appleseed as an American hero bringing apples to the people. Did you think Johnny Appleseed went around planting Red Delicious, Granny Smith, and Rome apples? I did.

And did you think he planted apples out the goodness of his heart? I thought that too. I had no idea he was a real estate developer, planting apples ahead of settlers who needed apples for … wait for it … HARD CIDER, their beverage of choice. But that doesn’t make him any less of an American hero. It’s just weird that his story is told, Tall Tale style, with big chunks of information carefully edited out.

Why don’t we celebrate him as a mortal Bacchus? It must be our hang up about alcohol here in the United States. Our Puritanical roots run deep.

But there are more fascinating mysteries about apples. Did you know that if you planted apple seeds out of any apply you ate, you would not get the same apple out of those trees? Not even close!

I pulled excerpts from Michael Pollan. His book, The Botany of Desire, is where I first learned about the biodiversity of the apple!

Mr. POLLAN: The apples that they planted from trees, the grafted trees that the colonists brought over, just did really badly. They were not well adapted to the harsh American environment. But then they also planted, you know, the apples that they were eating on the boat. They saved the seed and planted those. And what happens when you plant apples from seed is you get all different kinds of apples. Every single seed in an apple produces a different variety, most of which are useless. However, apples grown from seed are perfectly good for making cider.

LEVINE: The American apple had hit unexpected pay dirt. Its survival was assured. Fermentation would sweeten the colonists’ struggle and enliven the American frontier. Every homestead would have an apple orchard. Many land grants even required them. And those orchards provided entire families, including kids, with a sweet, safe and indispensable drink.

Mr. POLLAN: People didn’t go to their frontier without their apple seeds and this is why Johnny Appleseed was such an important figure. You know, when I started researching the apple, I thought he was just a comic book, you know, one of these legends like Paul Bunyan. I really did not know he was a historical figure, but he was. He’s just not as we’re told he was. Johnny Appleseed was bringing the gift of alcohol to the frontier. That’s why he was so popular. That’s why he was welcome in every cabin in Ohio. He was the American Dionysus. He was the guy bringing the booze.

From Michael Pollan’s blog, an interview he did for NPR

ALL the way in the back of the New York State Agricultural Experiment Station’s orchard here stand several jumbled rows of the oddest apple trees you’ve ever seen. No two are alike, not in form or leaf or fruit: this one could pass for a linden tree, that one for a demented forsythia. Maybe a third of these six-year-old trees are bearing apples this fall—strange, strange fruit that look and taste like nothing so much as God’s first drafts of what an apple might be.

I saw apples with the hue and heft of olives or cherries, next to glowing yellow Ping-Pong balls and dusky purple berries. I saw a whole assortment of baseballs, oblate and conic, some of them bright as infield grass, others dull as dirt. And I picked big, shiny red fruits that look just like apples, of all things, and seduce you into hazarding a bite.

From Michael Pollan’s blog, an article he wrote for New York Times

I find the descriptions of the apples to be strangely fascinating. If you want to learn more about the biodiversity apples, you can go to Geneva, New York (upstate NY) to see these actual weird apple trees. You also might want to read his book.

From Apple Juice to Hard Cider and then to Vinegar

How do you transform apple cider? Yeast is the key. When added to the juice, it transforms the sugars in the juice to alcohol. During this time, if no oxygen is introduced, you will get “must”. If the “must” ferments completely, nearly all of the sugars will be gone from the juice. At this point you have “Hard” cider.

Once the airlocks are removed and a bacteria is introduced (or allowed to self-introduce) to the cider, the alcohol turns into acedic acid (a.k.a. vinegar).

I haven’t tried to make it, but here’s how.

How much do we tell our kids about Johnny Appleseed? I think they would find the biodiversity of apples to be fascinating and that apple cider and it’s longer lasting cousin, hard cider is what settlers used as an every day beverage.

Who Was Johnny Appleseed? by Joan Holub

An easy biography aimed at kids 7 years and up, Holub captures Johnny Appleseed’s eccentricity and accomplishments.

Johnny Appleseed as Tall Tale with facts such as his his birth in Massachusetts in 1774 to his death in Indiana in 1845 melded with fiction to make him the larger than life icon that he is. Wonderfully illustrated by Steven Kellogg.

The Story of Johnny Appleseed by Aliki

Told in simple language for new independent readers, Kurtz’s version is a great way to introduce the biography genre to young kids.

Johnny Appleseed as a young child is the theme to this book for young readers, particularly his acts of kindness and love of nature.

Click on image of book above to view at Amazon or click below to see at Barnes and Noble.

16 thoughts on “Why Johnny Appleseed is Bacchus”