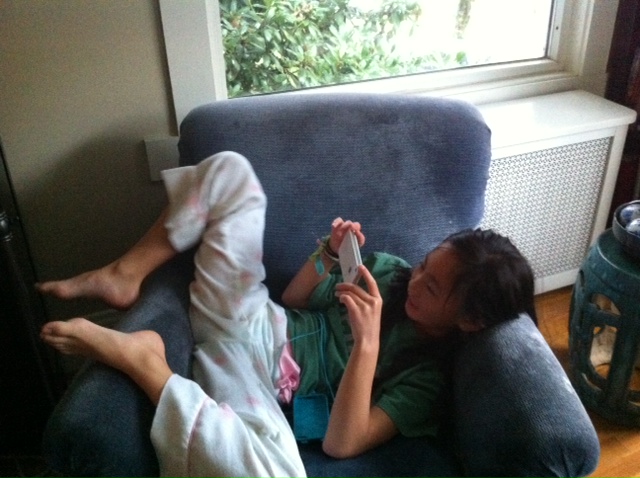 Compared to last year when we lost power for four and a half days (and it was below 50 degrees) exactly a year ago! I remember that we had to trick or treat in the dark using the flashlight app on our phones because our entire neighborhood had no power. We got off easy for Hurricane Sandy. Perhaps most of the trees with dead limbs or loose roots have been downed from the last storm when a tornado touched down in Worchester about 45 minutes away.

This year, we were also better prepared. We bought a generator for one thing. In fact, several of my neighbors did the same and another one got solar power. We also stocked up on gas for the generator. Made a special trip to the store for 6 gallons of water. Another trip for more batteries. Went to 3 different grocery stores for food. And filled up on gas after 7 hours of soccer on the way home even though I still had a half tank.

The storm hit that night. The wind was howling and the rain came down sideways for most of the afternoon and continued into the night. With power on, we spend the day puttering around. Not everyone in my town was so fortunate though. Many had lost power. The dog hasn’t been out to exercise for 2 days now but he’s chill. PickyKidPix stayed in her pajamas most of the day but she and her sister were able to run a few houses over in the storm to see their friend. With school canceled the next day too, it became a sleepover. I made a chicken and lentil soup. This granola recipe from Nigella Lawson is very popular as a gift. I made a 2nd batch to give to teacher tomorrow. A storm is a perfect excuse for Grasshopper and Sensei to break out her paints. She got the little girls painting collaboratively as well. By morning, the skies had cleared but the schools were still closed. The day has turned out to be beautiful and the storm damage not as extensive as last year. My heart goes out to those who suffered a loss. I hope you are all safe!

p.s. I know Vanita Cyril has a scary night in the Bronx but thankfully is ok. Dagmar lost power in Westchester County, New York. Mommy Niri is in a Boston suburb too, but lost power. Her 7-year-0ld daughter has some wise (and funny) advice for preparing for hurricanes! Doodles and Jots had a similar Hurricane day as mine; she lives on the Cape.

p.p.p.s. If you would like to donate to the Red Cross to help Hurricane Sandy relief efforts, please visit www.redcross.org, call 1-800-RED-CROSS, or text the word REDCROSS to 90999 to make a $10 donation.