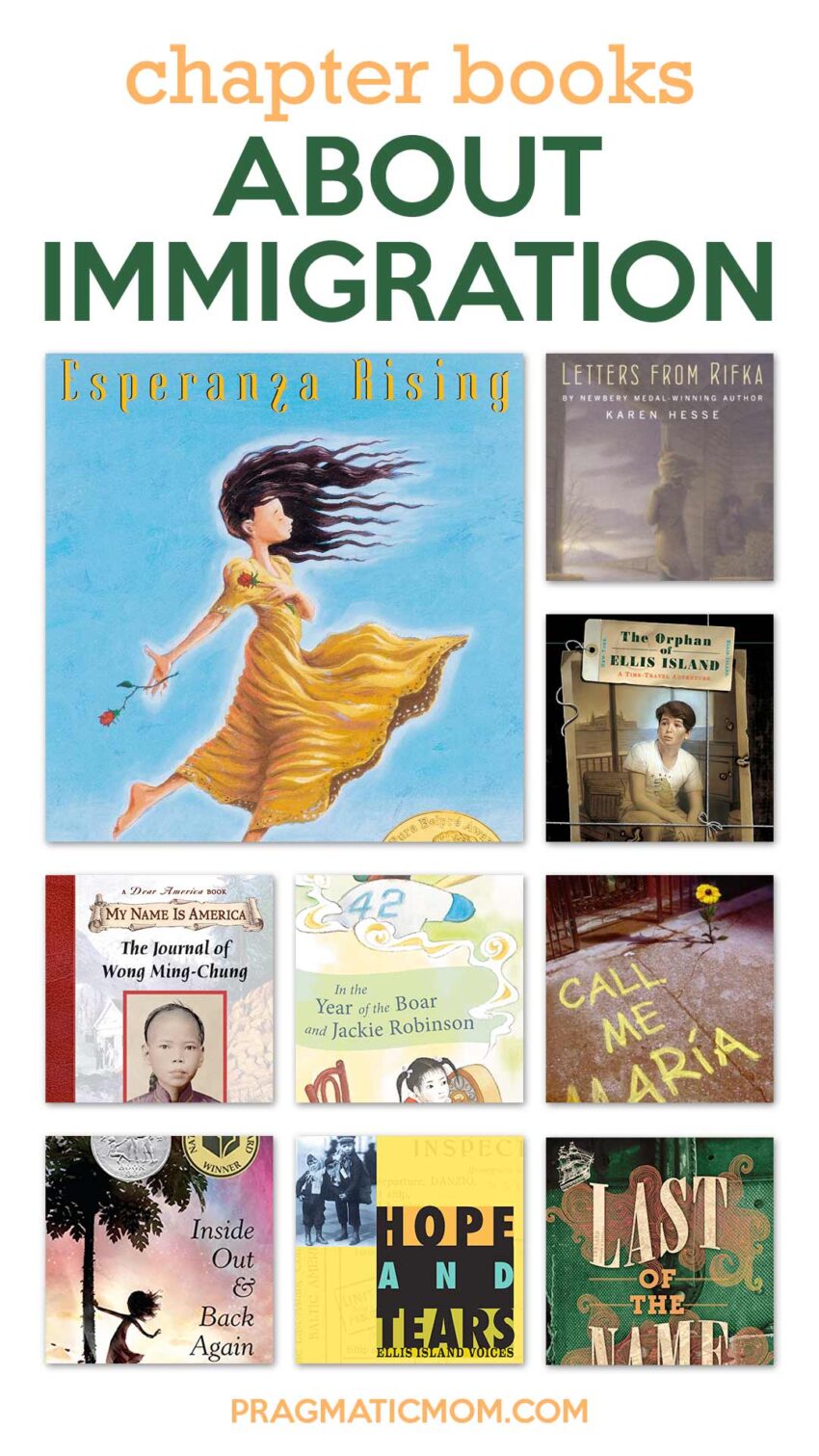 These are terms for my daughter’s 4th grade immigration unit. They also read several of the first four books on Nineteenth Immigration above but I’ve added some more books that fit the theme and tell the story of a more recent immigrant experience.

The highlight of this unit is the “Wax Museum.” The children are assigned to different immigrant groups and make a 3-sided display of what their country’s immigration experience was like.

Then, if you put in a “coin”, each child would come to “life” and recite a speech. The countries included Italy, Poland, Ireland,  Japan, Germany, Africa, and the Jews.

What struck me was how each immigrant group had the same story: life was hard when they came to the United States. No matter where they were from, they faced prejudice. I didn’t realize everyone felt the same way.

Prejudice:  a strong dislike of a particular group
Refugee:  a person who flees for safety to another country in times of war or disaster
Pushes:  the reasons an immigrant leaves their homeland
Pulls:  the reasons an immigrant comes to the United States
Legal immigrant:  a person who has permission from the U.S. government to enter the country.
Citizen:  a member of a particular country.
Green card:  an identification card that proves an immigrant has permission to live and work in the United States.
Naturalization:  the process of becoming a U.S. citizen.
Before an immigrant can apply for naturalization, must meet following requirements:
– At least 18 years old
– Must have green card
– Resident of U.S. for at least 5 years
– Good moral character
– Must be willing to take an oath pledging loyalty to U.S.
Naturalization Process
– Fill out Form N-400
– Send form, 2 photographs, copy of green card, and check for $250 to the INS (Immigration and Naturalization Service)
– Take and pass the citizenship test (20 questions on U.S government and history/must answer 12 correctly)- Complete an interview where they take an oath and answer questions about their N-400, their work, and their families.
– The citizenship ceremony
Who are Today’s Immigrants?
From the 1960s to the 1990s, most immigrants arrived from four areas of the world.  These places are Asia, the region of Mexico and Central America, the islands of the Caribbean Sea, and Africa.

The first four books are all part of the immigration unit. My kids read at least one of the four books but the class reads all four collectively. The kids all agreed that all four books were excellent and it really helped them get into the mindset of that early time period to feel what it would be like to be a new immigrant to the United States.

Esperanza thought she’d always live with her family on their ranch in Mexico–she’d always have fancy dresses, a beautiful home, & servants. But a sudden tragedy forces Esperanza and Mama to flee to California during the Great Depression, and to settle in a camp for Mexican farm workers. Esperanza isn’t ready for the hard labor, financial struggles, or lack of acceptance she now faces. When their new life is threatened, Esperanza must find a way to rise above her difficult circumstances.

Letters From Rifka by Karen Hesse

The Orphan of Ellis Island

During a school trip to Ellis Island, Dominick Avaro, a ten-year-old foster child, travels back in time to 1908 Italy and accompanies two young emigrants to America.

The Journal of Wong Ming Chung: A Chinese Miner, California, 1852  by Lawrence Yep

In 1852, during the height of the California Gold Rush, ten-year-old Wong Ming-Chung makes a dangerous trip to America to join his uncle on his hunt for a fortune. The true treasure for Ming-Chung, though, is America itself. In the midst of the lawless, often hostile environment, he is able to forge an international community of friends.

This next group of books is selections that I’ve picked. They also tell an immigrant’s story but a more recent one.

Shirley Temple Wong sails from China to America with a heart full of dreams. Her new home is in Brooklyn, New York. America is indeed a land full of wonders, but Shirley doesn’t know any English, so it’s hard to make friends. Then a miracle — baseball happens. It is 1947, and Jackie Robinson, star of the Brooklyn Dodgers, is everyone’s hero. Jackie Robinson is proving that a black man, the grandson of a slave, can make a difference in America, and for Shirley as well, on the ball field and off, America becomes the land of opportunity.

This is the immigrant experience that I am familiar with; parents who immigrated to the United States for graduate degrees, typically in the math and science fields, and staying permanently. These families, like my own, had a middle-class lifestyle but wrestled with issues of cultural identity, assimilation, and fitting in.

Maria is a girl caught between two worlds; Puerto Rico, where she was born, and New York, where she now lives in a basement apartment in the barrio. While her mother remains on the island, Maria lives with her father, the super of their building. As she struggles to lose her island accent, Maria does her best to find her place within the unfamiliar culture of the barrio. Finally, with the Spanglish of the barrio people ringing in her ears, she finds the poet within herself.

The combination of poetry, letter, and gorgeously written prose are as unique as Cofer’s own immigrant story that mirrors that of Maria. Her mother, who stays in Puerto Rico is a teacher and lives comfortably in the home country contrasted with the blue-collar life of her father who immigrates to the United States. English, which she struggles to learn, soon becomes a tool for her to express herself through poetry.

Inside Out and Back Again by Thanhha Lai

No one would believe me but at times I would choose wartime in Saigon over peacetime in Alabama.

For all the ten years of her life, HÀ has only known Saigon: the thrills of its markets, the joy of its traditions, the warmth of her friends close by . . . and the beauty of her very own papaya tree.

But now the Vietnam War has reached her home. HÀ and her family are forced to flee as Saigon falls, and they board a ship headed toward hope. In America, HÀ discovers the foreign world of Alabama: the coldness of its strangers, the dullness of its food, the strange shape of its landscape . . . and the strength of her very own family.

This is the moving story of one girl’s year of change, dreams, grief, and healing as she journeys from one country to another, one life to the next.

The Vietnamese immigrant experience is seen through the eyes of HÀ, a young girl with a strong personality. Told in verse, Lai’s book shows the difficulty of the transition from one country to another and the longing for the home country, even while fleeing in a time of war. For those who may think that it might be easier for children to start over in a new country, HÀ will convince you that this is a bittersweet experience at best.

One of my favorite bloggers, The Fourth Musketeer, just posted on a new historical fiction book called Hope and Tears: Ellis Island Voices by Gwenyth Swain.

She writes, “Author Gwenyth Swain brings stories of Ellis Island vividly to life through text and photographs in the beautifully rendered Hope and Tears:  Ellis Island Voices.  She uses poetry, monologues, and dialogues combined with a selection of archival photographs to help us imagine Ellis Island at various stages of its existence, beginning in the late 1500s with a poem by a native Lenni Lenape boy.” The Fourth Musketeer

The rest of the review is here. She recommends this book for ages 9 and up.

Last of the Name by Roseanne Parry

“This is a timely story about the treatment of a large group of immigrants who are mistreated by the mainstream culture. Most students today don’t know that the Irish faced a lot of obstacles in coming to the US from a troubled country. This was also fun, with Danny being forced to look and act like a girl. ”