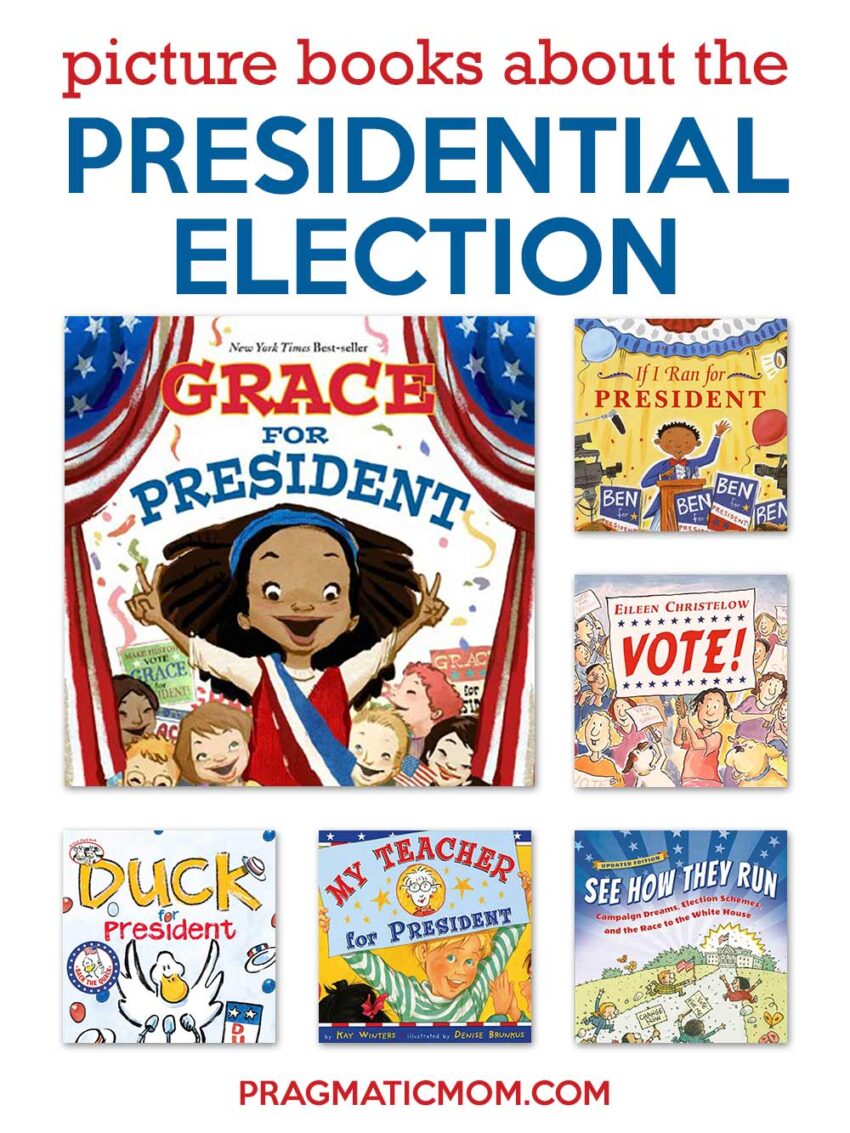 My 7-year-old son likes board games so he makes me play them with him as his sisters will generally not play board games with or without him. With the upcoming presidential election, I thought it might be a good way to explain our United States slightly convoluted election process to him.

Games for Kids About Presidential Election

The most daunting thing for me is to figure out the rules of any new game. The Presidential Game does not make it easy because the rules are not that clear. Can you arbitrarily choose getting votes versus raising money ?! Another frustration was trying to keep all the electoral votes, as symbolized with small plastic disks, on the board within the state. Our set up was on a bed and it wasn’t perfectly flat so the disks kept sliding out of their spots.

Still, we liked the game. We liked tracking our electoral votes online at The Presidential Game website. We liked the cards that rewarded or punished based on what would happen in real life during a campaign like scandals to successful fundraising events.

We actually liked the vagueness of the rules. With just the two of us, we could bend them at will to speed the game up in time for bedtime.

Who is the audience for this game? This is a great game for teachers who use board games in the classroom! Homeschooling kids would also enjoy this if they have an election unit. Families that like to discuss politics at home around the dinner table would have a blast chortling over the scenarios in the cards and perhaps injecting real-life stories from campaigns past and present.

Me? I’m not very politically inclined though I do make it a point to vote. My husband was a Political Science major so this is right up his alley and he should be the one to play this game to teach voting to kids. He’d love it and they would too!

To purchase or check out, you’ll need to go to their site. It’s $35 and recommended for ages 11 and up.

Vote for Me by Ben Clanton

If you like Elephant and Piggie books by Mo Willen, then you’ll like this book with Donkey and Elephant who duke it out, election style, as they campaign. They stoop to mudslinging (as do our presidential elections!), bribery, and familial connections to try to win votes. Who wins? Well, you’ll just have to read the story! Finally, an election picture book that both amuses and shows how childish candidates can be, both in picture books and in real life!

Charismatic Duck from Click, Clack, Moo is back with a bid to win the presidency but he finds that it’s not all that it’s cracked up to be. I don’t blame him. We think this book is so funny and it does give young kids a good understanding of what it takes to win elections.

It wasn’t that long ago when women in the United States were not allowed to vote, and Cordelia learns a little from her neighbor, the great suffragist Elizabeth Cady Stanton. As Stanton shares her story of how she was treated when she fought for the right to vote for women, Cordelia is inspired to an act of courage as well.

Grace for President by Kelly DiPucchio

When Grace’s teacher reveals that the United States has never had a female president, Grace decides to be the first.  And she immediately starts off her political career as a candidate the school’s mock election!
Author Kelly DiPucchio not only gives readers a fun introduction to the American electoral system, but also teaches them the value of hard work, courage, and independent thought–and offers an inspiring example of how to choose our leaders.

If I Ran for President by Catherine Stier

If you ran for president, you would have to do a lot of hard work. You would study the nation’s problems, tell the American people about your platform, select a running mate, and debate your opponents on live television.

In a presidential election year, when selecting a new leader will be the focus of national attention, what could be more timely than an upbeat and informative introduction to voting? Eileen Christelow’s Vote! is now available in a special paperback edition at a bargain price, to give even more young readers the chance to understand the process.

Parties, voter registration, campaigns, rallies, debates, Election Day, even a recount . . . all are clearly presented in a graphic format as the story of a local election unfolds, with hilarious commentary by the candidates’ pets.

Choosing our own government is one of our most cherished rights. This book is the perfect guide to how our democracy works.

See How They Run: Campaign Dreams, Election Schemes, and the Race to the White House by Susan E. Goodman

Presidential elections are big news — in the media, in classrooms, in Iowa and New Hampshire! But do you really know how the whole process works? For the home, for the classroom, for kids and adults, this is the one book every reader (and future voter) should have to understand our country’s most important decision-making process.

My Teacher for President by Kay Winters

Just in time for election season, a nomination teachers and students alike will endorse.

Oliver has been learning about the president’s job, and his teacher would be the perfect candidate. She loves white houses, she’s used to being followed everywhere, she attends lots of meetings, she finds jobs for people, and she believes in peace. Images of Oliver’s teacher depicted during a typical school day are contrasted with scenes of his heroine carrying out presidential duties. Click on image to examine more closely at Amazon, or purchase at Barnes and Noble below.

10 thoughts on “The Presidential Game: Everyone Can Be President”