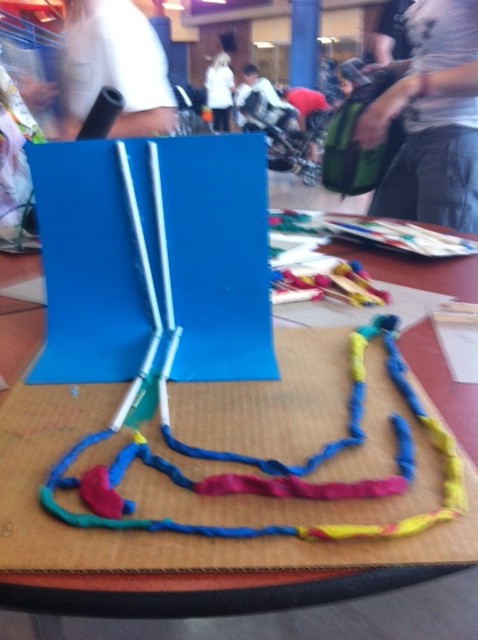 Club Invention is a day camp for kids, boys, and girls, and my 7-old-son did it for one week with two friends. They do a two-week stint in Newton, with various stops in other towns in our area, mostly in New England. This is science that you don’t get in school. What exactly is Club Invention? I had no idea from what my son told me every day after school. Even from the extensive newsletters that I received daily, I still was pretty unclear about what they did. In my mind, it had something to do with legos.

The last day is parent visiting day, and finally, I get it. (Thanks to my mom friend Lynn who worried I’d forget to come early!).

They have different segments every day.

1) Sports. They invent sports that they play. Today they played Infected Tag. They also made their own hockey sticks out of recyclables and played with it. 2) Simple Machines. They took apart an electronic and put it back together again. My bad forgetting to send in my hand mixer but apparently, there were extra appliances and my son didn’t mind helping his friend Sam take apart a blender.

3) SMart. Art with math. Fractals, Tesserets, and patterns in nature. They drew triangles smaller and smaller to learn that fractals are the same shape no matter what size. My son said this was really boring. Can’t say I blame him.

4) Inventions. I think there were many segments of inventions. From his open house, he worked on a marble run with friends and created creatures and habitats. One creature was motorized for speed. The final day was a race between the creatures that seemed really fun. There was mention of circuits — which they needed to motorize their creative. I also heard about baking soda and vinegar reactions as examples of reactions that can be harnessed into power. My son’s habitat has an operational door that he’s quite proud of. Also, he pointed out the bubble wrap carpet so his pets would be comfy. This creature my son made has a surprise that you’ll see in the video. Teamwork. My son and two friends designed and built this marble run. He says they need to build up some ramps to get more speed though. A work in progress.

What is Club Invention? Hands-on science fun for kids.

This is his motorized creature that he raced.

I think some older kids also worked on creating their own Rube Goldberg machines.

Kid Inventor Basic Creative Electronics Kit – Using the materials in this kit young inventors can build over 120 projects, including a magnetic fan, a sound-activated musical doorbell, and a fingertip flashbulb. — Each project is constructed using components with snap connections that make assembly easy and secure, so there is no need for soldering. — Comes with manual. Four AA batteries required, but not included.

Profiles eleven inventors between the ages of eight and fourteen, describes the steps involved in inventing a new product, and discusses contests, patents, lawyers, and clubs.

Click on image to view any item at Amazon.

12 thoughts on “Club Invention: Getting Kids Interested in Inventing”