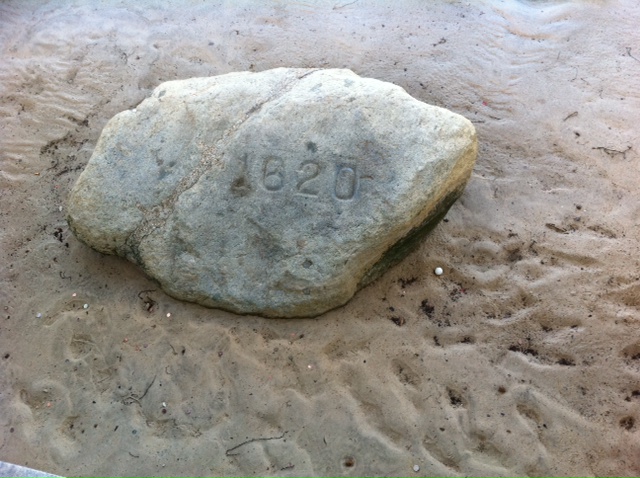 4th of July in Plymouth

What can you do in America’s home town to celebrate 4th of July? Glad you asked because there’s lots to do. My Mom Friend Alison showed us her home town, the Massachusetts Colony of Plymouth. What can do you do in two days in Plymouth? It’s hard to avoid bumping into history. We saw Plymouth Rock, The Mayflower, Jenny Grist Mill, and a Wampanoag who works at Plimouth Plantation. We entertained the kids with a fishing cruise, pool with waterside, arcade next to pool with water slide, parade that rained candy, and spectacular fireworks. 4th of July at America’s hometown was fabulous. My kids want to do this every year!

Plymouth (historically known as Plimouth and Plimoth) is a town in Plymouth County, Massachusetts. Plymouth holds a place of great prominence in American history, folklore and culture, and is known as “America’s Hometown.” Plymouth was the site of the colony founded in 1620 by the Pilgrims, passengers of the famous ship the Mayflower. Plymouth is where New England was first established. It is the oldest municipality in New England and one of the oldest in the United States. The town has served as the location of several prominent events, the most notable being the First Thanksgiving feast. Plymouth served as the capital of Plymouth Colony from its founding in 1620 until the colony’s merger with the Massachusetts Bay Colony in 1691. from Wikipedia

This is the food, gathered and blessed,

the corn and sweet berries, and wild turkey dressed,

Join author Rhonda Gowler Greene and illustrator Susan Gaber on a journey back to the very first Thanksgiving Day, when two societies came together to feast and honor the earth’s bounty in peace.

Boys and girls will find out why the Pilgrims left England to live in America, what they took with them on board the Mayflower, and the hardships they endured. They’ll learn what the Mayflower Compact was, how the Pilgrims made a peace treaty with the Indians, and how these brave settlers managed to survive in their new land.

Ms McGovern has carefully researched the Pilgrims’ journey and their first year in America. Her portrayal is full of fascinating detail about their everyday life. Young readers will be intrigued to discover that Pilgrim boys and girls slept on corn husk mattresses they made themselves, and that most of the houses had only one chair — which was reserved for the man of the house!

It’s a time for giving thanks  . . . when the Magic Tree House whisks Jack and Annie back to 1621 on the first Thanksgiving Day. The Pilgrims ask them to help get things ready. But whether it’s cooking or clamming, Jack and Annie don’t know how to do anything the Pilgrim way. Will they ruin the holiday forever? Or will the feast go on?

Chosen to become a special warrior prince in 1627, Tapenum prepares himself for the great honor by hunting, fishing, and sharing a day with friends and family, in a story that is complemented by photographs of Plymouth Plantation. [ages 4 and up]

The Children of the Morning Light: Wampanoag Tales as Told By Manitonquat by Mary F. Arquette

Eleven stories based on the oral traditions of the Wampanoag tribe of southern Massachusetts recount the origins of the world, the ancient history of the Wampanoag, and the ways in which the spirit Maushop aided the early humans.

Click on image to view at Amazon or go here to purchase at Barnes and Noble.

This hotel is similar to a Holiday Inn but also has a spa which looked and smelled lovely. The draw for families with kids is the indoor pool with a two story water slide coming off the Mayflower Ship. It’s such a fun pool that the hotel actually rents out the pool for kids’ birthday parties!

And who is John Carver you ask? I wondered myself …

John Carver was born c 1576. Carver was a wealthy London merchant. Little is known about his early life, however he was probably born in England.  He joined the Separatist movement and travelled from England to Holland to avoid religious persecution under James I. There he and other Separatists decided to travel to America and came on the Pilgrim ship Mayflower in 1620.  After the Mayflower arrival in America, John Carver was chosen the first governor. He was governor for about four months until his untimely death which is believed to be in April 1621. from Wikipedia You can get a great spot to watch parade around the corner from the John Carver Inn. It lasts for hours and candy comes flying out from many of the parade floats. My kids loved that! It was better than Halloween!! Captain John has whale watching and fishing cruises. The fish weren’t biting but our group managed to catch 3 fish in total. This marks the first time the boys beat the girls! We didn’t catch many fish but we caught something better … a double rainbow! The Lobster Hut We ended up eating dinner here twice instead. There is a great view of the harbor and plenty of tables outside. The food was great too!

The CabbyShack They don’t take reservations and both times we went, the wait was too long but this is a very family friendly restaurant with a treasure hunt and treasure chest.

You can take a tour of the Mayflower ship too! Everyone says that the Plymouth Rock is not impressive because it’s small. It was moved closer to shore and rumor has it that it cracked during the move. It’s in an enclosed sunken cage on the beach. My kids have been there several times so no one wanted to go on this trip. We did bump into a man who plays a Wampanoag Indian at the Ice Cream store which excited my kids who recognized him.

Fireworks but not like the Oops show in San Diego in which all the fireworks went off simultaneously in 48 spectacular seconds. This is the San Diego debacle that caused by user back up error. Oops!