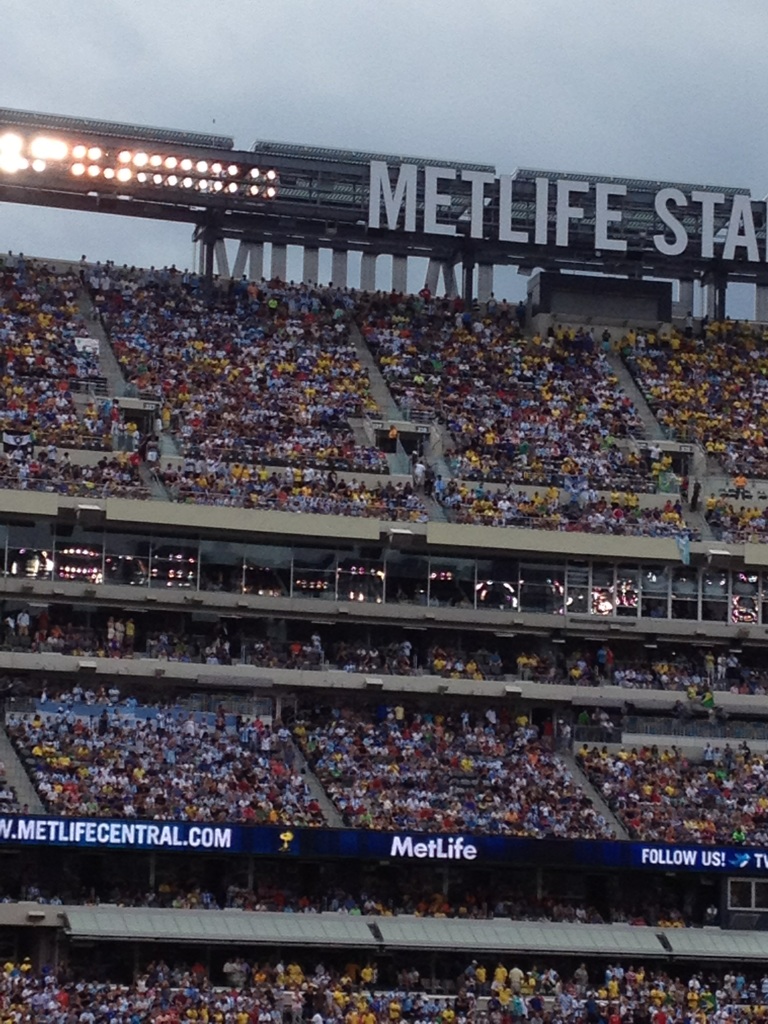 This was our third attempt to see Messi play soccer. Our D.C. trip to watch Barcelona versus Manchester United resulted in a loss for Barcelona as well as no Messi on the field. Our trip to Barcelona, Spain was booked before the La Liga schedule of games. Again, no Messi but we visited Camp Noa twice and walked by his old dorm.

Messi scored three goals during the unfriendly “friendly” against Brasil. Make no mistake, both teams were out for blood.

We saw a retired Argentinian National player with his wife and grand children three times that game day.

I don’t believe in coincidences, do you?

Argentina versus Brazil (from a mom’s perspective)

I am not particularly knowledgable about soccer. I just know that Lionel Messi is the greatest soccer player that ever lived and that he’s also a great role model for my kids. He’s polite, soft spoken and modest, all qualities I admire in my athletic superstars. He does good work for charities too!

I am a soccer mom with many carpools to show for it. When PickyKidPix missed the new town club team, we thought our trip was well-timed to get her out of the dumps. Finally, fingers crossed, she would see her soccer hero in action. The drive started early at 7 a.m. and the kids did not sleep the 3 hours to our hotel next to the MetLife Stadium. And we honestly didn’t know that it was the Argentinian Nation Team’s hotel as well. We got a few glimpses of Messi on the guarded off 2nd floor as he posed for photos but he was pretty much sequestered off.

It was a smart call by my husband to forgo the paid parking ($25) in favor of taking the hotel shuttle service (also $25 or $5/person) to the stadium across the highway. Despite being two hours early, the ride was long. It was here we met our retired professional soccer player who also played for Argentina’s National Team along with Maradona but when he was older and past his prime. He came up the day before with his wife and two grandkids and, of course, scored photos with Messi which they proudly showed us.  He did have a personally connection though. We understood that.

Another observation: being around so many Argentinian nationals made this outing seem like visiting another country. Another country that speaks Spanish! And we are trying to learn Spanish! The flashing ads in the Stadium were in Spanish! I forced my kids to hear my broken translations which they did not enjoy.

Our seats were near the food which was PERFECT for my kids who were either too hot from the sun when there was no cloud cover or hungry which seemed like that was every half hour. Requisite ball park food was procured: popcorn, chicken fingers, ice cream, and a good amount of beverages, sans caps.

Oh, and did I mention that they confiscate the water bottle caps here in NY/NJ? I asked for the bottle top after they removed mine at the concession stand.

“Too dangerous,” the nice man replied.

“Choking hazard?” I asked, reaching back to my days of parenting toddlers.

“No, people flick them,” he informed me. “It’s been this way for YEARS.” A Hat Trick for Messi

My husband has taken, in his middle age, to watching Barcelona soccer with the same fierce devotion that he used to have for golf so I have seen Messi play a  lot but just on T.V. What was surprising to me is how he stands around a lot, double teamed or even triple teamed. I had pictured him racing back and forth on the field, but it’s just not so.

He seriously touched the ball about a dozen times, NO MORE!, but make three amazing goals out of it. I saw two live, the middle goal I was in search of ice cream with my son so saw that goal on the TV screens inside. And he makes the defenders look like they are in slow motion.

So this is where it gets weird. There were just about 82,000 people at the stadium. It was sold out and set a record high for MetLife. After the game, we got confused by taking an exit not near where we entered. We ended up making a giant loop around the stadium while walking against the crowd that streamed out. Finally, we got near our entrance and we found … that same Retired National Player with his wife and grand kids. So we walked together searching for our unmarked mini van shuttle bus.

And he said, “I always thought Maradona was the world’s greatest player but after today, I have to say it’s Messi.” Well, he would know, right? I think he played alongside Maradona at some point as well. And he had actually played in this very stadium decades ago for Argentina. His mischievous 7-year-old soccer playing grandson informed us that his grandfather had lost on that day.

We returned to our hotel and ate in the hotel (the food is quite decent at the Sheraton!) and we saw the family again a few tables over. And then it happened. My husband said it was Pablo Zableta. He walked into the restaurant followed by a few men and cops with open handcuffs ready to arrest these overly zealous fans.

Only patrons of the restaurants were allowed to ask him for photos which they swarmed to do. My kids wiggled in last and got a photo too! It wasn’t Messi but it was close.

This game might be the turning point for Messi’s already spectacular career but it was a turning point for us as well. As we left for home, PickyKidPix observed after another man flashed his photo of himself with Messi from a previous game on his iPhone to us on the elevator ride down to the lobby.

“How come we are the only people at the game not to get a photo with Messi?”

I guess our work is not done, after all.

p.s. It’s said that one reason why Lionel Messi is such an amazing player is that he never makes a bad decision on the field. In fact, there is research that shows that soccer players, especially elite ones, have enhanced executive function that allows them to process a lot of data very quickly to make decisions. Will soccer do that for kids? Probably!

The theory is that playing soccer may have improved the players’ executive function. from CNN 
My husband recommends these soccer books for any soccer fan:

How Soccer Explains the World: An Unlikely Theory of Globalization by Franklin Foer

Soccer is much more than a game, or even a way of life. It’s a perfect window into the cross currents of today’s world, with all its joys and sorrows. In this remarkably insightful, wide-ranging work of reportage, Franklin Foer takes us on a surprising tour through the world of soccer, shining a spotlight on the clash of civilizations, the international economy, and just about everything in between. How Soccer Explains the World is an utterly original book that makes sense of our troubled times.

Barça: The Making of the Greatest Team in the World by Graham Hunter

Graham Hunter moved to Barcelona in 2001. He is a journalist of international reputation and covers Spanish football and FC Barcelona for Sky Sports, the BBC and newspapers and magazines across the world. His access to the team is unrivalled and he is the only English-speaking journalist to have interviewed Pep Guardiola during his time as Barcelona coach.

The Ball is Round: A Global History of Soccer by David Goldblatt

There may be no cultural practice more global than soccer. Rites of birth and marriage are infinitely diverse, but the rules of soccer are universal. No world religion can match its geographical scope. The single greatest simultaneous human collective experience is the World Cup final.

In this extraordinary tour de force, David Goldblatt tells the full story of soccer’s rise from chaotic folk ritual to the world’s most popular sport-now poised to fully establish itself in the USA. Already celebrated internationally, The Ball Is Round illuminates soccer’s role in the political and social histories of modern societies, but never loses sight of the beauty, joy, and excitement of the game itself.

Love & Blood: At the World Cup with the Footballers, Fans, and Freaks by Jamie Trecker

Veteran soccer commentator Jamie Trecker traveled to Germany for FIFA World Cup 2006. Here, reported from the restaurants, trains, bars, town squares, hostels, press boxes, and brothels, is his unvarnished account of the games and parties, great plays and fistfights, gossip and tacky souvenirs that turn the largest sporting event on earth into a true world bazaar. With equal measures insight and irreverence, Trecker captures the passion, politics, controversies, and economics that make soccer a reflection of the world.

Soccer and Philosophy, Beautiful Thoughts on the Beautiful Game, edited by Ted Richards

This collection of incisive articles gives a leading team of international philosophers a free kick toward exploring the complex and often hidden contours of the world of soccer. What does it really mean to be a fan (and why should we count Aristotle as one)? Why do great players such as Cristiano Ronaldo count as great artists (up there alongside Picasso, one author argues)? From the ethics of refereeing to the metaphysics of bent (like Beckham) space-time, this book shows soccer fans and philosophy buffs alike new ways to appreciate and understand the world’s favorite sport.

Nick Hornby has been a soccer fan since the moment he was conceived. Fever Pitch is his tribute to a lifelong obsession. Part autobiography, part comedy, part incisive analysis of insanity, Hornby’s award-winning memoir captures the fever pitch of fandom—its agony and ecstasy, its community, its defining role in thousands of young men’s coming of age stories. Fever Pitch is one for the home team. But above all, it is one for everyone who knows what it really means to have a losing season.

To view any book at Amazon, please click on image of book.

6 thoughts on “Hat Trick: For Us and For Lionel Messi”