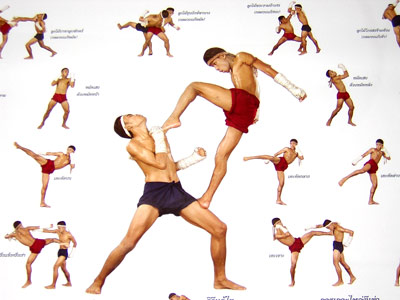 I am excited to have a new Muay Thai Kickboxing instructor. My Dad Friend Mike is a Golden Gloves champion. He’s also the father of my son’s best friend since before preschool. Before Dad Friend Mike had kids, he had a basement Fight Club with various MMA (Mixed Martial Arts) Fighters beating each other up by invitation only. Which is to say, one martial art fighter against another to see who wins. And so he knows various and sundry characters in and around Boston. And I do emphasize the word “characters!”

Dad Friend Mike’s buddy was the Muay Thai Champion of Brazil back in his day. Now he is launching a permanent exterior paint company and wants marketing help so we are doing an exchange. 1 hour of training for 1 hour of business consulting. It’s a great trade.

I’m excited because there is very little kickboxing to begin in Boston. Forget about Muay Thai. The Asian population is small and I don’t know a single person from Thailand. Burma/Myanmar I know. Chinese/Japanese/Korean/Vietnamese yes, but Thai? No. Nada.

Muay Thai, Jiu-Jitsu, and Capiraina are very popular in Brazil and my Gentleman Fighter is an expert at Muay Thai and Jiu-Jitsu, a deadly combination. He’s not a big guy either. Tall, yes. About 6 feet but slender. You would never guess that he’s lethal.

We did that introduction thing that is a big sizing up.

What is your background?

Him: I’m was the Muay Thai champion in Brazil and I fought professionally in Europe. I also trained the Special Forces in Brazil. (No mention of other martial arts, but I asked him Jiu-Jitsu? And he said yes. Which means he’s an expert. And probably a few other styles as well that I will glean out of him.)

Me: I have a Harvard undergrad and an MBA from UCLA in entrepreneurial marketing. The company I started in college hit the Inc. 500 list for fastest growing company when I was in my mid-twenties. We were number 12.

I studied with the Karate Forms champion of the world in Los Angeles, and the Chun Kuk Do fighting champion here in Boston. (They are also both Gentleman Fighters. Plus 4 other knuckleheads whose awards I can’t cite.) I was surprised he had heard of Chun Kuk Do. It’s the school of karate by Chuck Norris, an association that always makes me giggle.

Ok. We have established that we are both qualified to help each other.

What do you want to learn?

Him: Do I need a new business name? How do I get into retail stores? Should the brand include my house painting service or just the product? How do I grow my business? I need help with everything.

Me: I want to learn self defense. I tried Tae Kwon Do — too much legs. I can’t kick anyone’s head with my tight hamstrings. I tried Aikido, too elegant for me. I would need to be a black belt before it’s effective.

I also suck at blocking punches. When I rush in, I am too stupid to retreat. Also, I can’t KO (knock-out) my attacker with a punch to the head. Are you kidding me? I am barely 5 feet tall and weigh 93 pounds soaking wet. I can barely reach their head.

Oh, and I got robbed at gunpoint years ago. And I don’t want to be that mom who was taken at knifepoint at a Target parking lot on Christmas Eve with her 3-year-old son and raped repeatedly. That happened 10 miles from where I live. And so I kickbox to feel safe.

So, we are also vulnerable.

Muay Thai is perfect for me. 1) Thai people are built like me. Small and waif-like. 2) It maximizes power by using the shin to kick rather than the foot. Harder, stronger, and also more pointy. 3) The point of attack is the thigh, which is better for me because I can actually reach it. 4) Kicking and punching don’t require years of perfect technique to become effective weapons. You can be an uncoordinated doofus and still land blows effectively.

And, I can talk while I box — all moms can multi-task — so 1) new name needs to have a word for 20 (Veint?), durability, shield, permanent in it since this paint is some new ceramic technology that has 2o year warranty. 2) you need a blog to sell 24/7. 3) You need to build a local market and build-out. 4) Customer service is the key differentiator. ALWAYS return calls within 2 hours, 7 days a week including Christmas/New Year/4th of July 5) retail ain’t gonna happen. Your product needs a sales force to sell. It won’t sell off the shelf or display.

The next step is the assessment. Show me what you got.

Because I have a gentleman fighter as opposed to “The Situation” Fighter, it’s very different. Gentleman fighters have nothing to prove. They are not trying to impress; in fact, they avoid street fights at all costs. But you would never be able to land a kick to their groin.

I heard that he has to have quick hands. I need that. When you are small like me, you only have a few tools at your disposal: speed, surprise, and technique. I need perfect technique to squeeze every ounce of power out of my slight body.

But I hit hard. I really do.

My Gentleman Fighter was pleasantly surprised and pleased. But to get more power, he showed me to extend my arm farther to the target by bringing my opposite shoulder back slightly. It felt good to get a little more bit power from that. And he worked on my blocking. Muay Thai blocks actually cover the face while sticking out the elbows. Very small movements.

My roundhouse kick, however, was another story. I need to hit the target with my shin which I never tried before. You need to stand a little closer. It surprisingly doesn’t hurt when you land a kick, but I did bruise up within a few hours. He said: crawl before you walk. You have to build up your resistance to make your shin harder.

I don’t have a heavy bag at home to practice. He asked if I had any friends who would let me kick them for practice.

No, not even my husband.

He laughed. He said he turned his body in so I wouldn’t hurt him. The shin is a very effective kick!

I also don’t pivot the foot on the ground enough to spin around enough with more force. Argh! I try but I have to really think about it. It’s like rubbing your tummy while patting your head. Spin foot out from 12: oo to 9:00 while kicking with the shin. Spin/Kick/Thwack. Spin/Kick/Thwack. Now, look at the head instead of the target.

Oh, it’s so fun! Truly! Like a dance. And now I am really sweating and in need of water.

And so today, I am pleasantly sore in my arms. You get nice, lean Michelle Obama-like arm muscles from punching, without any bulkiness. Honestly, there is NOTHING better for triceps than hitting a heavy bag. It’s because you have to absorb the force as well as expend the energy to hit it.

As for my Gentleman Fighter, we shall meet again. Weekly, I hope, once he returns from California. And I need to order a heavy bag that’s weighted at the bottom with water. My girls will be so pleased. They like to kick it over with a flying sidekick.

p.s. There is no such thing as self-defense. There is only offense. Kill or be killed. Must be the Special Forces training? I am ok with that. I just said self-defense to sound P.C.

p.p.s. Thank you Dad Friend Mike for the introduction!

p.p.p.s. I guess I am never kicking with my foot again. Muay Thai never uses the foot to kick. Too bad, because that front kick to the groin was very satisfying and my husband isn’t volunteering, not since I got him in his groin 17 years ago. Hey, I warned him not to mess with me because I didn’t want to hurt him. He thought it would be so funny to put me in a chokehold to show how defenseless I was.

Now he says, this your thing baby. Just go do it. But you can’t kick me for practice.

And he bought me pink boxing glove wraps for my wrists.

For anyone who wants to try kickboxing as a workout, here are some popular DVDs.

With 5 separate segments of 10 minutes each, you can tailor your workout to the areas you want to work on as well as the amount of time you have to spend. Switching up the segments will also ensure that you won’t get bored doing the same routine over and over again.

Unlike celebrity trainers with a kickboxing DVD, Tiffany and Max Chen are actual Kung Fu champion fighters so you will learn correct technique as well as get a great workout. Pound for pound, boxers are the fittest athletes on the planet. What is great about kickboxing is that it adds in the extra element of kicking thus working out your butt, thighs, and legs. It’s also great for self-defense.

This DVD gets rave reviews:

This workout is seriously fun and has the potential to make you seriously sweaty. — FitSugar.com, August 29, 2007

“This is the absolute best ever…if I were to star in my own workout video, this is the one I would make.” — FitnessMagazine.com

Powerstrike 5 with Ilaria Montagnani
Voted “Best Workout” by New York and Shape magazine, and “Best Kickboxing DVD” by Health magazine. Ilaria has a black belt in karate, with training in kickboxing and Iaido sword. She created Powerstrike which combines martial arts with modern choreography. It’s great for anyone who wants to wield a sword as part of your workout.
Here is a post on my previous Kickboxing Instructor (the opposite of this guy).
Click on DVD to view at Amazon. As an Amazon Associate, I earn from qualifying purchases.