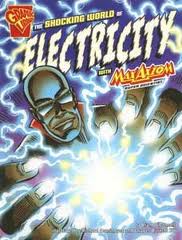 Science Projects and Games for Kids

My 7-year-old son played with this toy with a 5th grade boy while we are at a dinner party together.  They came back every ten minutes to show us the circuit boards they made. Some had light bulbs lit up. Others made noise. Still, others were connected through a cup of water. The parents who hosted us said that this toy won Science Toy of the Year and that their kids played with it intensely for a few days.

The mom stressed the importance of EXPLAINING how circuits work versus just hooking everything up like a Lego toy. Since my son opted to take two weeks off after school with nary a day camp or play date in sight, I thought I would buy this toy as part of his summer Camp Mom. Since my knowledge of physics is weak at best — I barely passed pre-med freshman college physics — I needed this review myself.

Click on image of game to purchase at Amazon.\

Science of Circuits and Electricity for Kids

This video a little dull but at least it’s short. I might have my son watch this after playing with the kit for a while.

This last video is meant for grades 5th through 8th. If my son has questions about atoms and electrons as pertain to electricity, this will clear it up. It’s a little long and dull though.

Current is the flow of electricity around a circuit.  For example, if you connect a lamp to the socket show above, electricity will flow through the wires and be converted into heat and light in the lamp.  To have electricity flowing you need some driving force [… voltage is the driving force.]

Often in trying to explain voltage and current, a water analogy is used.  Voltage is the equivalent to water pressure and current the flow of water through pipes. from My Electrical Engineering

This is from Kensington Intermediate Senior High

Circuits are a closed path for electricity. Every electrical appliance in your home, whether it is battery operated or you plug it in, is a circuit.

How Do Circuits Work?

The electrons need a complete path or circuit to flow through so the electrons can go from the negative to the positive terminals of the power source. This flow of electrons is known as an electric current.

If there is a break in the circuit, the electrons can’t get through to the appliance and there will be no electrical charge.

All circuits have 3 main parts: a power source, a conducting path, and a load (something that will use the electricity). In the labs we did in class we usually used a battery as a power source, a piece of copper wire as a conducting path, and a light bulb as a load. To make a more complicated circuit, like the one in your home, you must use a switch. A switch allows you to control the flow of current in an electrical circuit. These allow you to control the power in your home. Think of a light switch.

There are two main types electrical circuits, Parallel and Series. Take a look at some of the differences between the two circuits.

An electric circuit is like a pathway made of wires that electrons can flow through. A battery or other power source gives the force (voltage) that makes the electrons move. When the electrons get to a device like a light bulb, your computer, or a refrigerator, they give it the power to make it work.

The word “circuit” sounds like “circle,” and a circuit needs to be circular to work. The wires have to go from the power source to the device and back again, so that the electrons can go out and come back.

Vocabulary from Battery and Electricity Vocabulary

electrical charge: An electrical property of an atom, described as either positive or negative.

electric energy (or electricity): Form of energy created by the flow of electrons; this energy allows the completion of work.

voltage: The force or push, given by a battery or generator that moves electrons from one place to another in an electric circuit or conductor.

battery: A source of electrical energy that is created by a chemical reaction and pushes electric charges within a circuit.

conductor: Materials through which electrical current can flow. Copper is a good conductor. Most electrical wires are copper.

switch: A device that allows an electrical circuit to be opened or closed.

circuit: A path through which electricity flows.

parallel circuit: An electrical circuit in which the electricity can follow more than one path. It is a circuit that connects several objects or resistances in a way that allows each resistance to have its own path. This is the way appliances and lights are connected in homes, so they do not all have to be on at once.

series circuit: A circuit in which all the lights or resistors are connected in sequence, or one after the other, forming a single path through which the electricity can flow. Batteries in a flashlight and in small, portable radios are frequently connected in series.

Books for Kids on Science of Electricity and Circuits

Here are some books to check out at the library to round this Camp Mom session out. Use the Outing portion of the Camp Mom day to chase down these book or buy from Amazon by clicking on image of book.

Small enough to squeeze through power lines, Ms. Frizzle’s class learns how electric current travels through the town, lights up a light bulb, heats up a toaster, and runs an electric motor. Fans of the Magic School Bus won’t be left behind by this simple and informative introduction to the generation and distribution of electricity.

Oscar and the Bird: A Book About Electricity (Start with Science) by Geoff Waring

When Oscar the kitten finds a tractor in a field and accidentally turns on the windshield wipers, he is full of questions about electricity. Luckily, Bird knows the answers! With the help of his friend, Oscar finds out how electricity is made and stored, which machines need electricity to work — and why we always need to be careful around wires, batteries, plugs, and sockets.

In graphic novel format, follows the adventures of Max Axiom, a science teacher and super-cool super-scientist, as he explains the science behind electricity.

Charged Up: The Story of Electricity (Science Works) by Jacqui Bailey

What makes lights blink on and refrigerators hum? Learn how electricity goes from the power plant to you home. See what happens when a bolt of lightning sends things awry in this story of electricity.

After two centuries of research and experimentation, electricity has revolutionized the way we live and become an indispensable part of scientific progress. Eyewitness Electricity brings vividly to life our exploration of this powerful natural force. It is a vital part of the living world. Our eyes receive light rays and turn them into tiny electrical signals that pass along our nerves to the brain. The chemicals in batteries create power for such things as toys and flashlights. The invention of electric motors enabled the creation of a whole range of household appliances that have shaped the modern world. See how electricity works nerves and muscles and what causes lightning. Learn how electricity can transmit voices and images across an ocean and what makes a silicon chip work. Discover the amazing speed of charged atoms, what happens when you tune in the radio, and much, much more!

With projects ranging from building a basic battery-connected circuit to a do-it -yourself burglar alarm, children will have fun discovering the properties and principles of electricity.

10 thoughts on “Physics of Circuits and Electricity for Kids”