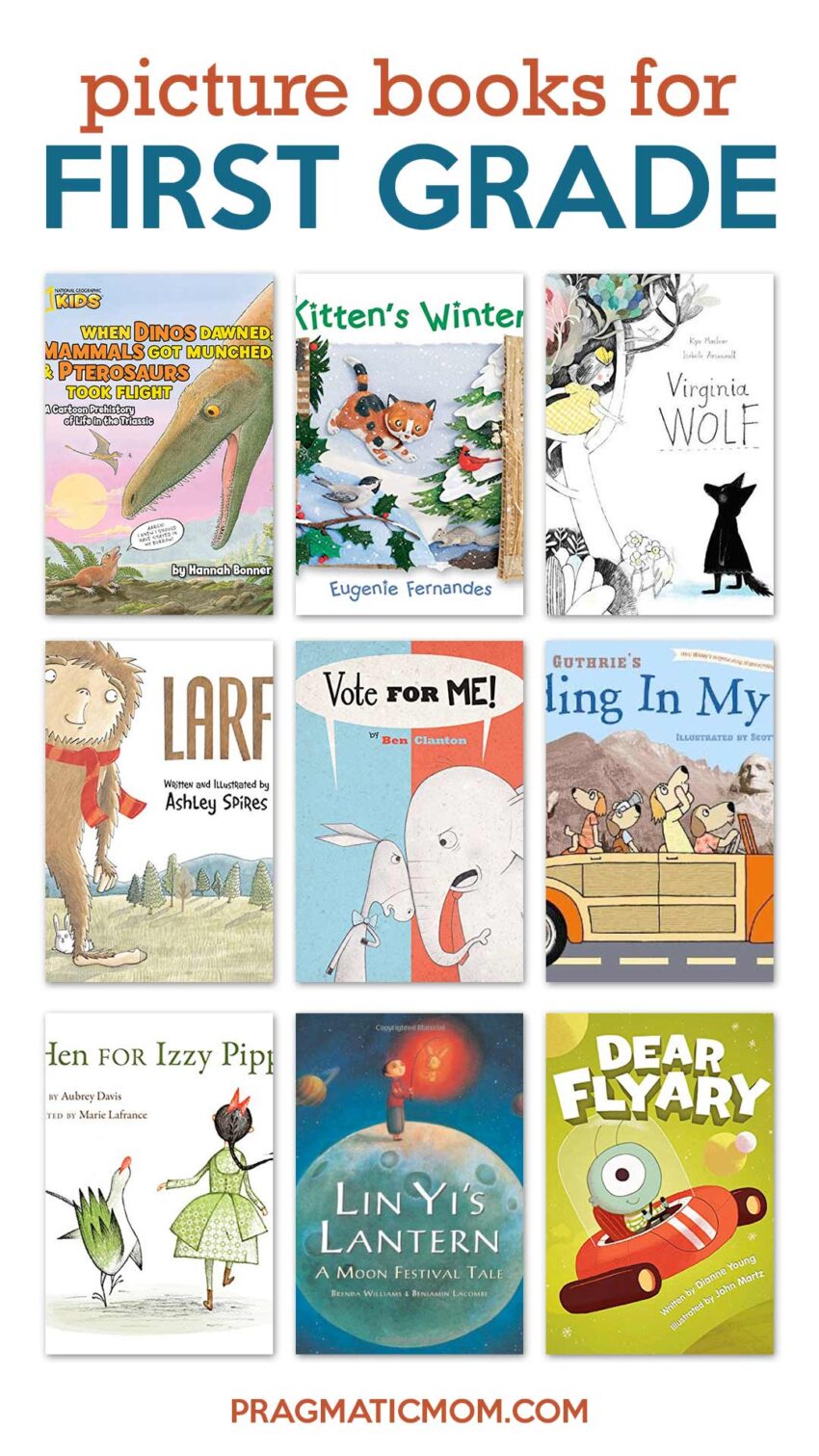 My 7-year-0ld son in first grade reviews a large stack of newly published books. He ranks them by preference. #10 is his favorite and it’s not surprising to me that it’s Dear Flyary, a picture book for kids about a cute alien with a new vehicle.

What picture book are you enjoying with your kids? Do any of these pique your interest? I bet they are at your public library!

Winter comes to Kitten’s world, and the little calico leaves her cozy home for an afternoon of exploration and discovery. Kitten learns that even on a frosty day, animal life flourishes: a squirrel forages, an otter goes fishing and a woodpecker taps the side of a bare-limbed tree. At the same time, readers discover that for many animals, winter is a time of rest. Softly, Kitten treads past a burrowing turtle, a napping beaver, and a hibernating bear. Told in rhyming couplets, Kitten’s Winter is a perfect introduction to animal behavior and habitats. And its sumptuous, mixed-media illustrations make it ideal for beginning and pre-readers, who will delight in spotting all the different details of the season. [a simple picture book for ages 2 and up]

It was very interesting.

2. When Dinos Dawned, Mammals Got Munched, and Pterosaurs Took Flight: A Cartoon PreHistory of Life in the Triassic (National Geographic Kids) by Hannah Bonner

In the style of WHEN BUGS WERE BIG and WHEN FISH GOT FEET this book discusses all the exciting developments of the Triassic Age, from the recovery of the planet from the most deadly mass extinction ever, to the first appearance of the dinosaurs. We also get to meet the first mammals, the first pterosaurs (flying reptiles), the first frogs, a host of predatory marine reptiles, early turtles, and the first coral reefs.  With the books’ signature blend of humor and clearly presented information, cartoon illustrations help keep the fact-filled material extra fun. [a non-fiction book full of factoids for ages 3 and up]

Vanessa’s sister, Virginia, is in a “wolfish” mood — growling, howling, and acting very strange. It’s a funk so fierce, the whole household feels topsy-turvy. Vanessa tries everything she can think of to cheer her up, but nothing seems to work. Then Virginia tells Vanessa about an imaginary, perfect place called Bloomsberry. Armed with an idea, Vanessa begins to paint Bloomsberry on the bedroom walls, transforming them into a beautiful garden complete with a ladder and swing “so that what was down could climb up.” Before long, Virginia, too, has picked up a brush and undergoes a surprising transformation of her own. Loosely based on the relationship between author Virginia Woolf and her sister, painter Vanessa Bell, Virginia Wolf is an uplifting story for readers of all ages. [a picture book for ages 4 and up]

In 1820, Sam Harding and Abe Lincoln forged a strong friendship, based on their love of learning and of the outdoors. This timeless story is about the special bond between two boys, the experiences they shared growing up in early America, and how one of the boys eventually became the sixteenth President of the United States. [a biography for ages 5 and up]

I sort of liked it.

No one believes Larf exists, and he likes it that way. Larf, you see, is a sasquatch, the only sasquatch in the world (or so it seems). He has a very pleasant, and very private, life in the woods, where on any given day he might be found jogging, gardening, or walking Eric, his pet bunny. But everything changes one morning when Larf discovers that another sasquatch is scheduled to make an appearance in the nearby city of Hunderfitz. What?! That must mean he’s not the only sasquatch in the world! Excited by the prospect of having a friend to share hair grooming tips with (and let’s face it, teeter-tottering alone is no fun), Larf disguises himself as a city slicker and heads for Hunderfitz — where he’s in for a couple of enormous surprises. Ashley Spires once again shows her chops for creating irresistible, quirky characters and laugh-aloud stories and illustrations. Readers with little feet and big feet will fall head over heels for Larf. [a picture book for ages 4 and up]

I liked it because Larf found a friend.

6. Vote For Me! by Ben Clanton

Hey, you! Yes, you with the dazzling smile! The donkey wants your vote. So does the elephant. And each will do just about anything to win your support. Brag? Sure! Flatter? Absolutely! Exaggerate, name-call, make silly promises and generally act childish? Yes, yes, yes and yes. Soon, the tension mounts, and these two quarrelsome candidates resort to slinging mud (literally) and flinging insults. And what happens when the election results are in? Well, let’s just say the donkey and the elephant are in for a little surprise — and a certain bewhiskered, third-party candidate is in for a first term. Vote for Me! is a timely satire of American politics, but it’s a story readers of all nationalities and ages will recognize. Comical, retro illustrations (in shades of blue and red, of course) are completely winning, and the duelling duo’s insult-laden exchanges promise to have readers laughing out loud. [a picture book great for upcoming presidential election for ages 4 and up]
I liked it and I want to vote in an election.

7. Riding In My Car illustrated by Scott Mechin (with movable parts, lift-the-flaps, and pop-ups!)

Inspired by his love of Woody Guthrie’s Riding In My Car, award-winning illustrator Scott Menchin invites readers on an exciting cross-country road trip with a family of dogs!

This interactive novelty format features pull-tabs, pop-ups, and lift-the-flaps on every page, and makes kids feel like they’re really coming along for the ride, visiting some of America’s most notable landmarks including the Statue of Liberty, Mount Rushmore, the Grand Canyon and more! Hidden beneath each flap are fun American facts for the child readers and interesting biographical details about Woody Guthrie for adults.

The entire song will be hosted on www.ridinginmycarbook.com so readers can read and sing along! [an interactive lift the flap, pull the tab picture book for ages 2 and up]

I liked it because I got to see all the interesting places.

8. A Hen for Izzy Pippik by Aubrey Davis, illustrated by Marie Lafrance

When Shaina finds a magnificent hen, she knows that Izzy Pippik, the hen’s owner, is sure to return for her. In the meantime, Shaina decides she will care for the animal. But when dozens of eggs hatch and rowdy chickens scatter throughout the village, Shaina must fight the entire town if she has any hope of protecting the birds. Inspired by Jewish and Islamic traditional texts, this is a beautiful tale about doing the right thing, even in the face of adversity. [ a picture book that reads like a folk tale for ages 4 and up]

I liked it because she got a hen and they all got little chicks because she worked so hard to get the hen back.

Lin Yi is given money to buy items at the market for tonight’s Moon Festival. If he bargains well, he can purchase a red rabbit lantern for himself. But he must purchase everything on his mother’s list first! This heart-warming story will resonate with both children and adults, as they learn about the wonderful Chinese Moon Festival and the rewards that come from putting others first. Set in China, this story offers an opportunity to learn about Chinese customs through the accessible story of a young boy who has his heart set on buying a lantern for the festival. This book includes informative notes about life in rural China and the Moon Festival, celebrated in October. Personal and Social Development – Lin Yi faces a moral dilemma and learns that doing the right thing for its own sake is the best course of action, and that luck may shine on those who act morally. [a multi-cultural picture book perfect for anyone celebrating the Moon Festival for ages 4 and up]

I liked it because Lin Yi got a lantern after all the work they did.

One-eyed aliens Frazzle recounts his flying adventures in a new journal (in alien vernacular, of course). He bighearts his little Model 7, but as time passes, it starts making strange sounds, and Frazzle — pressured by friends and co-workers — wonders if he should trade it in. One day, when it goes CLUNK in the middle of the flyway, it’s clear something must be done. Youngsters will love the out-of-this-world illustrations depicting worlds rife with all manner of alien life. Even more irresistible: an unexpected ending sure to delight careful readers. [a picture book for ages 4 and up]

I liked it the best because it’s about an alien. Aliens are cool.