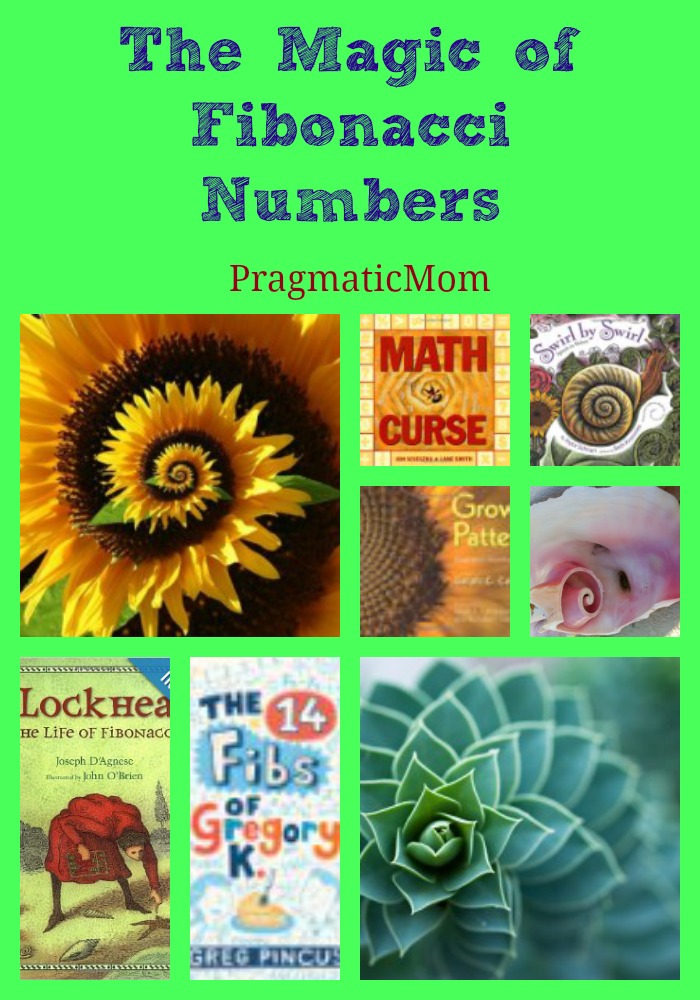 Books for Kids about Math of Spirals

It started with my son’s favorite picture book, Math Curse, where I could not get this pattern of numbers:

And who was this Fibonacci character anyway? I had a feeling that the name was not a random choice.

All of a sudden, I was reminded of my freshman year calculus class. The class went uneventfully until the second semester when we did sequences and series.

It seemed very simple at first…

A series is a series.

A sequence is an ordered list of objects (or events). Like a set, it contains members (also called elements or terms), and the number of terms (possibly infinite) is called the length of the sequence. Unlike a set, order matters, and exactly the same elements can appear multiple times at different positions in the sequence. A sequence is a discrete function. from Wiki Notes

But when the test came, if I looked at the problem straight on, it looked vaguely like a series. And if I squinted a little, hmmm…. it was now looking like a sequence. I ended up with a D minus on that test. And so when number patterns come up, I get a little panicky.

Then Doodles and Jots did a beautiful post on Fractals and I started to see and understand that math exists in nature. And Imagination Soup’s post caught my eye when she posted her Spiral Investigation.

And so they inspired me. I can do this! Deep breath!

I CAN do a Mathematics of Spirals For Dummies Post. (My mathematics professor father would be so proud.)

A Fibonacci number is a SEQUENCE which is found by adding the two numbers before it together.

Can you figure out the next number? Here are a bunch of them.

* Is a Sequence a subset of a Series? I am still so confused! We are summing here, so doesn’t this make this series-like? Thank goodness that  this is the first time since Freshman year in college that I have to think about sequences versus series though I will probably get an anxiety nightmare tonight (the kind where you have a test tomorrow and you forgot to go to your math class all semester. yeah. hate those!)

And who was Fibonacci anyway?

The “greatest European mathematician of the middle ages”, his full name was Leonardo of Pisa, or Leonardo Pisano in Italian since he was born in Pisa,Italy, the city with the famous Leaning Tower, about 1175 AD.

Plants illustrate the Fibonacci series in the numbers of leaves, the arrangement of leaves around the stem and in the positioning of leaves, sections and seeds. from Golden Number

The Fibonacci number sequence is evident in nature by the pattern which gets bigger and bigger from the center of the spiral as the spiral expands out. I took those photos myself, but here are some more I found online. from Glass and Steel Structure Are you seeing patterns in nature now? And can you see the patterns are number patterns? Yay, we both pass! Phew!

Picture Books for Kids About Math in Nature

Swirl by Swirl by Joyce SidmanA Caldecott medalist and a Newbery Honor-winning poet celebrate the beauty and value of spirals.What makes the tiny snail shell so beautiful? Why does that shape occur in nature over and over again—in rushing rivers, in a flower bud, even inside your ear?
With simplicity and grace, Krommes and Sidman not only reveal the many spirals in nature—from fiddleheads to elephant tusks, from crashing waves to spiraling galaxies—but also celebrate the beauty and usefulness of this fascinating shape.

Blockhead: The Life of Fibonacci by Joseph D’Agnese

As a young boy in medieval Italy, Leonardo Fibonacci thought about numbers day and night. He was such a daydreamer that people called him a blockhead.

When Leonardo grew up and traveled the world, he was inspired by the numbers used in different countries. Then he realized that many things in nature, from the number of petals on a flower to the spiral of a nautilus shell, seem to follow a certain pattern. The boy who was once teased for being a blockhead had discovered what came to be known as the Fibonacci Sequence!

This title deals with the biggest mathematical mystery in nature – Fibonacci numbers! Named after a famous mathematician, the number pattern is simple: 1, 1, 2, 3, 5, 8, 13…Each number in the sequence comes from adding the two numbers before it. What’s the mystery? The pattern crops up in the most unexpected places. You’ll find it in the disk of a sunflower, the skin of a pineapple, and the spiral of a nautilus shell. No one knows how nature came up with the sequence. Sarah C. and Richard P. Campbell introduce the Fibonacci sequence through a series of stunning photographs. Young readers will soon be seeing nature through new eyes, looking for Fibonacci numbers in daisies, pinecones, leaf patterns, seashells, and more.

The 14 Fibs of Gregory K. by Greg Pincus

Gregory thinks he has been born into the wrong family.  They love math and he doesn’t. Writing is his thing. When his best friend has to move away, he decides that the best way to convince his parents to send him to writing camp with her is to enter their cherished city-wide math competition. Now, he just has to figure out a math project. Fibonacci numbers come to the rescue because there is logic and poetry in their numbers! [chapter book, ages 8 and up]

Math is logical, functional and just … awesome. Mathemagician Arthur Benjamin explores hidden properties of that weird and wonderful set of numbers, the Fibonacci series. (And reminds you that mathematics can be inspiring, too!)

Thank you to Christy for her great suggestion of Vi Hart Videos Doodling in Math.

Here’s a great post on Math Myticism: Is the Hurricane Shape a Fibonacci Spiral? To view any book more closely at Amazon, please click on image of book. As an Amazon Associate, I earn from qualified purchases. 14 thoughts on “Math Fun for Kids: Math in Spirals”