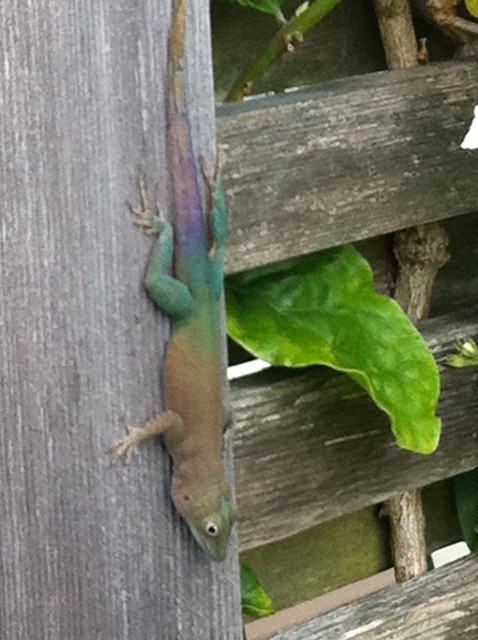 We found this Gecko in Bermuda that I thought could change its colors like a Chameleon. I call it a Gecko Chameleon but then I actually did a little research and its real name is a Bermuda Anole or Antiguan Anole.

The Antiguan Anole is commonly referred to in Bermuda as the Warwick Lizard because it was most commonly seen in Warwick and Paget, but today can be seen in most parts of the island. This lizard is native to Antigua and Barbuda and arrived in Bermuda by accident probably in the 1940s. from Bermuda Conservation

The Warwick Lizard (Anolis leachii) is a beautiful lizard named after the parish where it’s often seen… The Parish of Warwick! It’s actually a native to the islands of Antigua and Barbuda in the Lesser Antilles. It was accidentally introduced in Bermuda in the 1940s and can grow up to 14 inches (35 cm) long. It eats mostly insects but will go after anything it can catch and fit into its mouth, including baby birds from nests. from Planet Neptune

Isn’t it beautiful? And with the colors of an island, especially such a colorful island as Bermuda! Very appropriate though not native. Can you spot the Gecko Chameleon here? Anolis is a genus of lizards belonging to the family Polychrotidae. With nearly 400 species, Anolis represents the world’s most species rich amniote genus. Several species of Anolis are occasionally ascribed to the genus Norops, but the validity of the Norops genus is not widely accepted.

Anolis lizards are one of the best examples of both adaptive radiation** and convergent evolution*. Populations of lizards on isolated islands diverge to occupy separate ecological niches, mostly in terms of the location within the vegetation where they forage (such as in the crown of trees vs. the trunk vs. underlying shrubs).These divergences in habitat are accompanied by morphological changes primarily related to moving on the substrate diameter they most frequently encounter, with twig ecomorphs having short limbs while trunk ecomorphs have long limbs.

In addition, these patterns repeat on numerous islands, with animals in similar habitats converging on similar body forms repeatedly. This demonstrates that adaptive radiation can actually be predictable based on habitat encountered, and experimental introductions onto formerly lizard-free islands have proven that Anolis evolution can be predicted. from Wikipedia.

* Convergent evolution describes the acquisition of the same biological trait in unrelated lineages.

** In evolutionary biology, adaptive radiation is the evolution of ecological and phenotypic diversity within a rapidly multiplying lineage. Starting with a recent single ancestor, this process results in the speciation and phenotypic adaptation of an array of species exhibiting different morphological and physiological traits with which they can exploit a range of divergent environments.

Isn’t it interesting how the Anole lizard has evolved?

This is what I think of when I think of a Gecko. We found this in Florida. Of course, this is not a Gecko either. It’s another Anole! This one is called a Bark Anole. Bark anoles are another non-native species of anole in south Florida, although they’ve been around long enough (more than 50 years) that some authorities distinguish a Floridian subspecies. They spend their time clinging to trunks and large branches of trees, and this picture shows that they’ve evolved a good camouflage for this lifestyle.

Bark anoles are native to Hispaniola. The CAAR species account describes many subspecies, only one of which lives in the southeast corner of Hispaniola, the location of Casa de Campo. But the description of that subspecies (Anolis distichus properus) doesn’t match the color variations I saw. The account says plain ashy to pale green, with a very pale yellow dewlap occasionally sporting a pale orange center. The bark anoles I saw ranged from very dark brown to gray to yellowish, but never green, and the dewlaps had a bright yellow border around a bright orange center. I suspect the populations have moved around and interbred significantly since 1971 when the species account was written, so I won’t attempt to specify a subspecies here. from Wild Herps

I’m not sure why the Gecko gets all the fame and glory when the Anole is quite impressive too. Are Geckos just blessed with bigger personalities? Or is it because Gecko is easier to pronounce? I found these Gecko themed picture book and chapter book for kids but there don’t seem to be any children’s books featuring an Anole as a character.

Fun Books to Read with Kids with Geckos

Hold on to your fedoras, Gecko fans, a new detective has arrived at Emerson Hicky Elementary. His name’s Bland. James Bland. And he immediately cracks a case that has baffled Chet and Natalie. Do our favorite PIs get jealous? You’d better believe it! When Bland suddenly goes missing, the blame falls squarely on everyone’s favorite gecko. So Chet will have to rescue his tubby rival or face a stint behind bars–and we’re not talking the jungle gym.

The Goodnight Gecko by Gill McBarnet
The Goodnight Gecko. By: Gill McBarnet. Synopsis: A gecko mother gently introduces her son to the delightful sights and sounds of a Hawaiian night. With soothing verse, this reassuring and ever popular bedtime story is a celebration of the night. In no time the little gecko’s fears are dispelled, and he joins his mother chirruping in the bright moonlight. Back cover information on geckos.
Perhaps it was this Geico commercial that shot Geckos to super stardom?

Do you think Geckos get all the glory and Anoles get left out?

p.s. If evolutionary biology interests you, Stephan J. Gould is fun to read. Middle school kids and older might also enjoy it!

Ever Since Darwin: Reflections in Natural History by Stephen Jay Gould

7 thoughts on “Gecko Chameleon? Can You Spot It?”