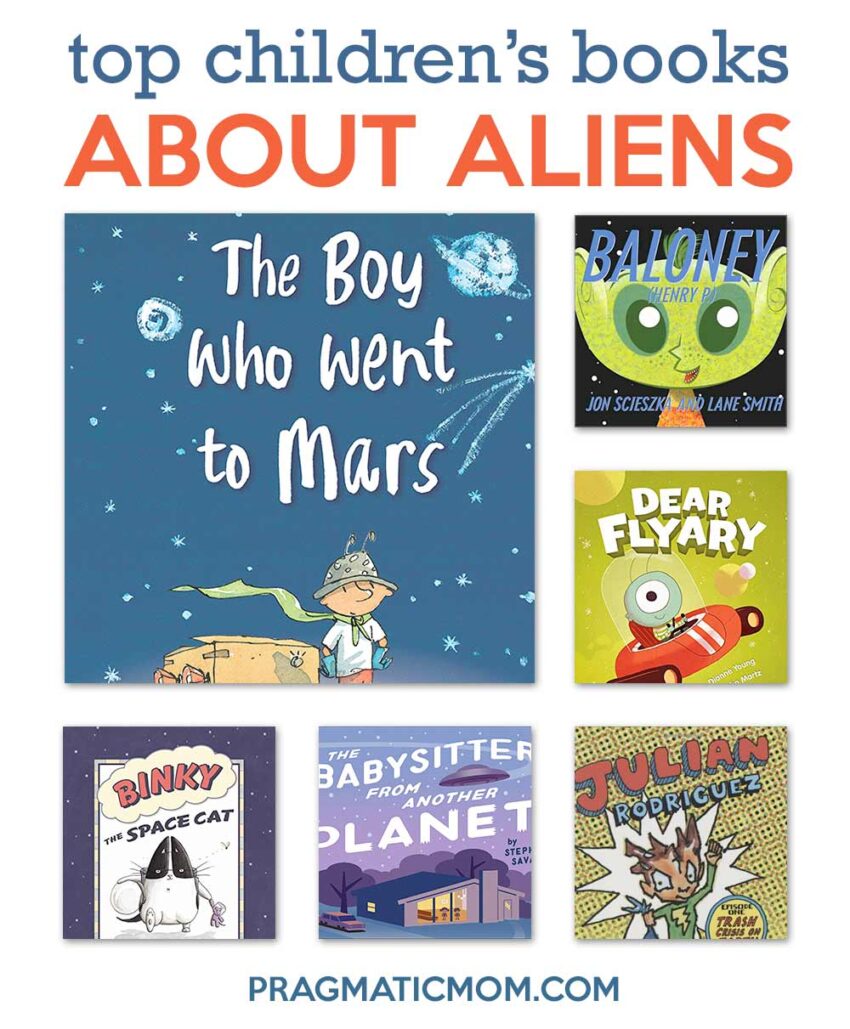 My 7-year-old son loves alien books. While some boys are put off by the weird Alien language, he thinks it’s funny. I read Henry P. Baloney to his Kindergarten class the week he was the Star of the Week, and I noticed most of the kids did not find the book as funny as we do. Author Jon Scieszka in a sly use of foreign language onomatopoeia uses words from almost two dozen languages that kind of sound like English words in this engaging picture book.

The Julian Rodriguez easy chapter book series uses an alien posing as a young son to really push this idea of alien books for building vocabulary. Julian is trying to make sense of the confusing world of humans — basketballs, baseballs, and pretty much all balls are “orbs”. And that is just the start. It’s the kind of read-together book that amuses adults as well as kids.

I’m not sure if alien books will be a brief phase for my son. I hope not. I love these books!

Who is Henry P. Baloney? An alien schoolkid who has to think of a very good reason for being late to szkola again. Otherwise, it is Permanent Lifelong Detention.

This New York Times and Publishers Weekly bestseller follows Henry’s tall tale of his lost zimulis with graphically created piksas that help explain just exactly what Henry is talking about. An out-of-this-world experience, the book is told in at least twenty different Earth languages, and is probably the best excuse ever for being late to szkola.

Funnyman Jon Scieszka strikes again and the pairing with talented artist Lane Smith is very successful. Henry is late to his alien school so he has to explain his tardiness to his teacher. It’s a pretty complicated story exactly why he’s late. His teacher isn’t having it, but luckily they are working on tall tales so Henry successfully avoids Permanent Lifelong Detention once again! The beauty of this book is that Jon uses more than a dozen foreign languages with words that sound a little like English words as the alien language. It’s a fun twist. [picture books, ages 5 and up]

One-eyed alien Frazzle recounts his flying adventures in a new journal (in alien vernacular, of course). He bighearts his little Model 7, but as time passes, it starts making strange sounds, and Frazzle — pressured by friends and co-workers — wonders if he should trade it in. One day, when it goes CLUNK in the middle of the flyway, it’s clear something must be done. Youngsters will love the out-of-this-world illustrations depicting worlds rife with all manner of alien life. Even more irresistible: an unexpected ending sure to delight careful readers.

This picture book is my son’s new book to read at night. We read it several days in a row. We love the alien words. While they don’t translate into English, they are fun to guess what they mean. It’s actually not so different from decoding a foreign language only this is much more fun.

Here’s a sample of what I’m talking about:

Oldpop gave you to me for my dropday. He wants me to scrib down everything about my first spaceship. It’s a Pattzer keepition, He even showed me the drivary that his oldpop (my real-real-oldpop) scribbed. It was pretty laffy.

The Boy Who Went to Mars by Simon James

I really liked this funny picture book about a boy, Stanley, who goes to Mars in response to his mother going out of town for work. When Stanley returns from Mars during his mother’s absence, he acts out, both at home and at school. When his mother returns and asks if he’s been good, Stanley has to fly back to Mars to return as himself. And that helps put all the trouble behind him! This is a fun picture book for kids who like the Alexander picture book series.[picture book, ages 4 and up]

The Babysitter from Another Planet by Stephen Savage

The concept is fun about having a babysitter from another planet, but I don’t love the illustration style. It was too simplistic which made the human children feel cartoony-y — like they weren’t real, and that ruined the setup of the story for me. [picture book, ages 4 and up]

Binky is a space cat – at least in his own mind. He’s really a house cat who has never left the family “space station.” Unlike other house cats, Binky has a mission: to blast off into outer space (outside), explore unknown places (the backyard), and battle aliens (bugs). Binky must undergo rigorous training so he can repel the alien attacks that threaten his humans. As he builds his spaceship, he must be extremely careful with his blueprints – the enemy is always watching. Soon Binky is ready to voyage into outer space. His humans go out there every day and he’s sure they need a certified space cat to protect them. But just as he’s about to blast off with his co-pilot, Ted (stuffed mousie), Binky realizes that he’s left something very important behind? and it’s not the zero-gravity kitty litter. In the first book in the Binky Adventure series, graphic-novel readers will delight in watching where this lovable and quirky cat’s imagination takes him.

Binky may be just an ordinary house cat and not a space cat; I’m never quite sure about that actually. I think that is what makes this early graphic novel series so fun. [easy reader graphic novels, ages 4 and up]

Julian Rodriguez is on a mission for the Mothership. He’s been sent to Earth to study human lifeforms and their bizarre habits–from their disgusting diet (orange sticks named carrots, a flavorless liquid called water, and the revolting substance is known as vegi-dogs) to their repressive treatment of their young (forcing them to carry out menial tasks known as chores, withholding access to the great cultural masterpieces called cartoons). When Julian’s Maternal Unit assigns a hideous task, it’s nearly too much for the hardened space veteran to bear–but he finds his courage at last.

Julian Rodriguez #2: Invasion of the Relatives

First Officer Julian Rodriguez has seen his share of injustice during his time on Earth, and now he’s facing his greatest challenge yet: the invasion of his home base by a group of genetically linked mini-brains known as “the relatives.” He’s been moved from his personal sleep chamber (bedroom) to a subterranean containment facility (the basement). Then he is forced to participate in a show of ceremonial athleticism (football), and must consume a variety of mystery foods (Thanksgiving dinner). But the ultimate disgrace comes when he is threatened with contamination by mini-brain DNA!

My Favorite Graphic Novels from 2020

4 thoughts on “Best Books for Kids Who Like Aliens that Build Vocabulary!”