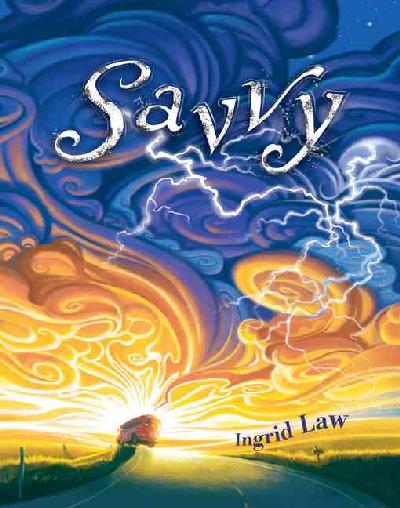 My mom friend Cynthia throws a very good book club for kids. All three of her kids are in a book club and hers ALWAYS have both food and a really fun activity that relate to the book. It’s not an accident, it turns out. She tells me that she researches book club activities to plan out hers.

Two of her kids are boys, and we both bemoaned the fact that there are very few online resources for little boy book clubs. Her youngest is in Kindergarten and mine is in First Grade. There seem to be plenty of resources for girls book clubs, particularly for mother/daughter book clubs.

If you host book clubs for your kids, please share your favorite book and book club activity. If you have food as well, you are a champion. Definitely, please share! We are begging you!!

For generations, the Beaumont family has harbored a magical secret. They each possess a “savvy”—a special supernatural power that strikes when they turn thirteen. Grandpa Bomba moves mountains, her older brothers create hurricanes and spark electricity . . . and now it’s the eve of Mibs’s big day.

As if waiting weren’t hard enough, the family gets scary news two days before Mibs’s birthday: Poppa has been in a terrible accident. Mibs develops the singular mission to get to the hospital and prove that her new power can save her dad. So she sneaks onto a salesman’s bus . . . only to find the bus heading in the opposite direction. Suddenly Mibs finds herself on an unforgettable odyssey that will force her to make sense of growing up—and of other people, who might also have a few secrets hidden just beneath the skin.

My oldest, Music Lovers, first discovered Savvy for us. It was such a popular book that she read it alongside her friend Anna; both holding the book together and waiting for each to finish before turning the page.

She was disappointed with the sequel, Scumble, though because it featured a completely different family. Other girls in her book club and PickyKidPix‘s book club felt the same way,unfortunately. Perhaps a sequel is in order for the Savvy family?

The book club was scheduled after an early release day. These days, though there are only five girls in the book club, it’s tough to find a block of time when they are all free. Early release days are always a safe bet and we have more than a half-dozen throughout the school year. Since Cynthia took the kids before lunch, she fed them. This was a nice tie in the with book.

She set up a “Diner” with hamburgers and fries, a meal enjoyed by all including the Savvy family in the book. It was followed by banana cream pie . The pie is mentioned in the book but our girls got a little creative with it. They insisted on eating the pie without the use of hands or utensils like a pie eating contest. It was messy fun!

Cynthia led a book discussion around naming what savvy you would have. I don’t recall what they were though.

Finally, because Mibs’ savvy relates to tattoos — I don’t want to spoil it for you — the girls returned home looking like biker chicks. Cynthia said she was able to find washable tattoos conveniently at the local Stop and Shop grocery store. Here are some if your grocery store isn’t stocked with them.

These twisted tribal tattoos are from a company called Savvi. Weird coincidence?! Or not!

The idea of a Savvy or special super power is a fun one and there are many popular chapter books with super power themes. If your child liked Harry Potter, Percy Jackson, Kane Chronicles, Charlie Bone, The Emerald Atlas, Maximum Ride, The Pharaoh’s Secret, then Savvy would be a good pick. What super power chapter books am I missing? Thanks for helping me out!

I just got a copy of The Emerald Atlas from Random House but I already own it on my Color Nook so I am giving it away. To win, please leave a comment with either: a chapter book about special super powers that I left out OR what your super power would be. Thanks! U.S. and Canada only please.

To view any book or item more closely at Amazon, please click on image.

Congrats to Ann! She won a copy of The Emerald Atlas!