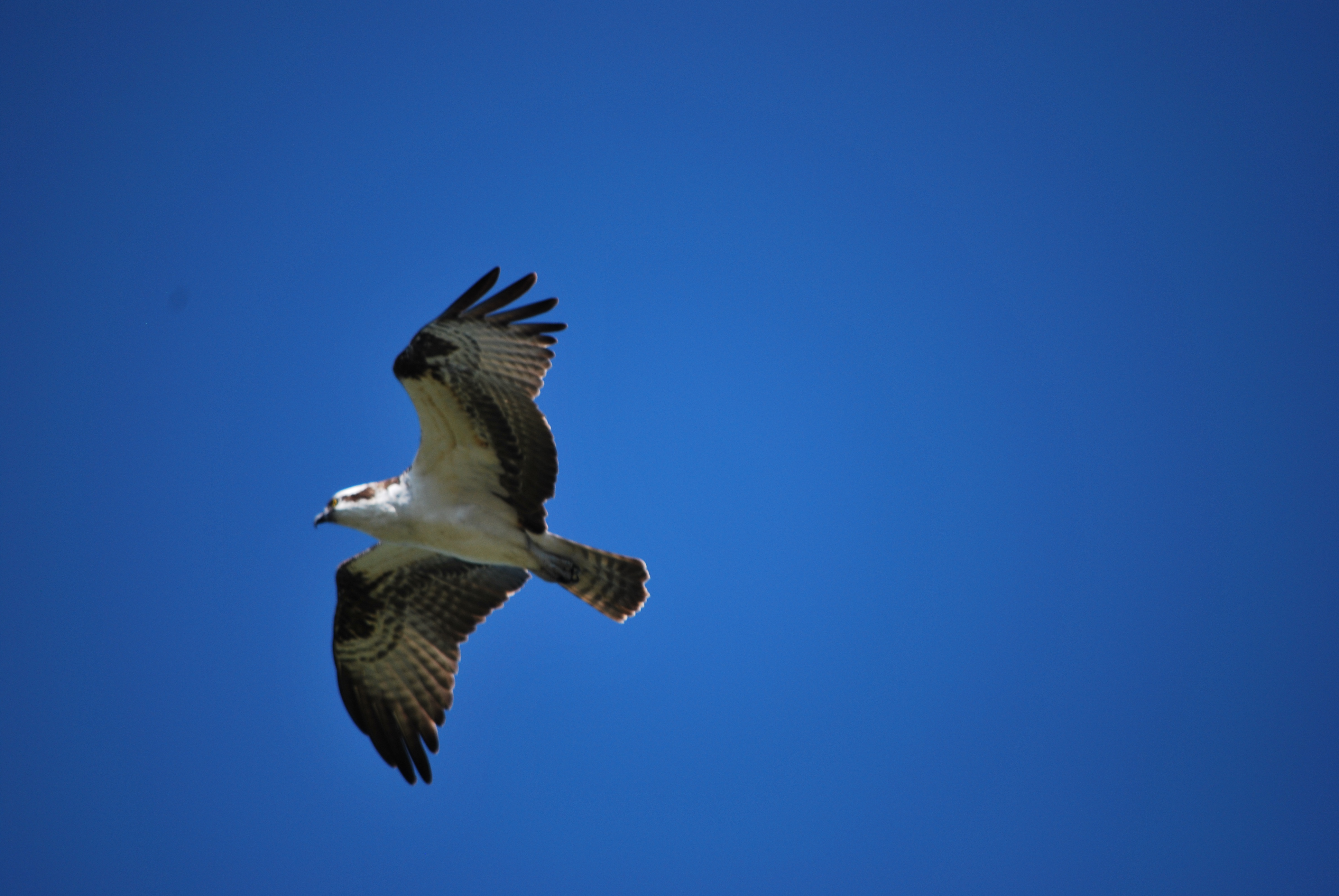 It all started when I saw the Osprey that Doodles and Jots photographed near her home in Cape Cod. Several weeks prior (5 to be exact), I spotted an Osprey in North Captiva, Florida. Could it be the same Osprey? Probably not, but it was fun to speculate. But people do exactly this. Especially those at The Raptor Center at the University of Minnesota like Mark Martell.

Mark’s work elucidated several patterns in Osprey migration across North America. The Pacific Northwest birds all make a non-stop sprint migration over the western deserts and winter in Mexico and Central America. None of these birds went as far as South America.

East coast birds all go down the east coast, some fairly far inland, some along the coast proper, to the tip of Florida, over to Cuba, and then on to Hispaniola (Haiti and the Dominican Republic). Some winter in the Caribbean, but the majority make the 4-500 mile trip across the Caribbean to Venezuela. From there, they scattered across much of the South American continent, some going as far as the Pantanal in Paraguay and Southwestern Brazil. Some truly overachieving birds even make it to Argentina!

There are some very rare exceptions–two birds we have followed got to Cuba and went west to Central America and then on into South America via the Isthmus of Panama, and one of our 2006 birds went due south from Cuba to Jamaica and on to Panama–a crossing of over 700 mi.

Birds that we have followed for several migrations tend to be as faithful to their wintering spot in South America as they are to their nesting area up north.

Males and females take separate vacations, which someone waggishly suggested is the reason they can stay mated for life. The young travel on their own when they head south. They do not follow their parents, but work on pure instinct, apparently following a fairly simple two-line program: Go south and stay over land as long as possible. This gets them to the Keys in Florida, the southeastern tip of Cuba, and many of them to the little peninsula on the south coast of Hispaniola.

The young remain on their wintering grounds for an extra year, not returning until just before their first “hatch day”. They’re not going to breed until they’re 3 or 4 anyway, so we suspected they may use the extra time to locate a really reliable fishing spot for future migrations, but our growing data set for young birds suggests that they’ve already settled down well before their “extra” year in the tropics, so it may just be an adaptation to avoid the risks associated with a 3000+ mile trip.

So it seems that Doodles and Jots’ Osprey has a permanent home near her. That is so cool!

Have I hooked you on Osprey and their migration? Let me keep trying!

My kids and husband saw an Osprey hunt in Florida two years ago though we were not able to capture it on video.

Here are some great chapter books. Ok, they are not Osprey but a cousin, the Peregrine Falcon.

It is illegal to harbor an endangered bird, so when Frightful returns to Sam, the boy who raised her, he has to chase her away. Frightful doesn’t know how to live alone in the wild, and she can’t feed herself, mate, brood chicks, or migrate. She struggles to survive and gradually learns to enjoy her new freedom. But Frightful feels a bond with Sam that can never be broken, and more than anything else, she wants to return to him.

In 1959, Jean Craighead George published My Side of the Mountain. This coming-of-age story about a boy and his falcon went on to win a Newbery Honor, and for the past forty years has enthralled and entertained generations of would-be Sam Gribleys. The two books that followed–On the Far Side of the Mountain and Frightful’s Mountain–were equally extraordinary. Now all three books are available in one deluxe yet affordable volume for veteran devotees and brand-new fans alike.

The Peregrine’s Journey: A Story of Migration by Madeleine Dunphy

The Peregrine’s Journey vividly describes one of the most remarkable feats in the animal kingdom. Beginning in Alaska and ending two months later in Argentina, the peregrine falcon’s annual migration is an 8,000-mile flight across the Americas. This beautifully illustrated book allows young readers to follow one bird on its journey. Based on the actual migration of a real bird that was tracked by the U.S. Fish and Wildlife Service, the book is filled with amazing facts about the bird’s diet, habits, and navigational abilities, as well as stunning views of the many habitats the peregrine visits along the way.

Are you still resistant? My pièce de résistance!

You must have your kids watch this Osprey video. Who knew Osprey have potty humor?! Hey, whatever it takes to hook them!

I hope this was fun for you too!