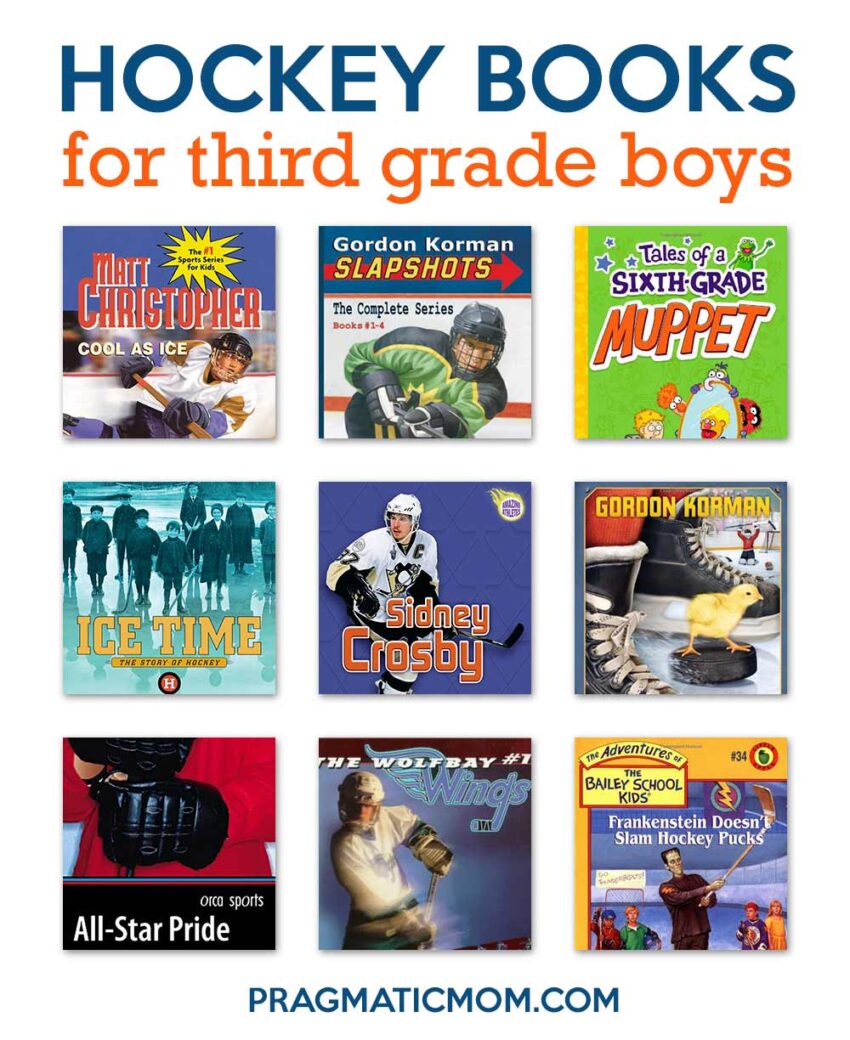 Great hockey books for kids to get a reluctant boy reader excited about reading. Includes fiction, non-fiction series, and biographies for 3rd graders.

I’m continuing my search for books that my 3rd grade reluctant reader friend who likes funny will read. He’s a very sporty kid but his mom says his favorite sport is hockey and she hasn’t had luck finding any books on this sport.

There are plenty of baseball and basketball books, and he plays those sports and more, but she thinks that if I can find hockey, he’ll read them happily. This is part of the reading strategies we’re coming up with.

I’m excited to get him reading so I searched and found these hockey chapter books including early chapter books, fiction, non-fiction and biography.

Hockey Night in Kenya by Danson Mutinda and Eric Walters

“Friends Kitoo and Nigosi have had difficult lives in Kenya, but are now living at an orphanage where they are able to attend school regularly. Even though the food is usually githeri (corn and beans) rather than their favorite pilau, both boys are hopeful. Kitoo is a big reader, and Mrs. Kyatha at the school library gives him some damaged books for his own. One of these is about hockey. While Kenya doesn’t have a lot of ice, there is some ball hockey that is played. When the two boys travel to the city with Jackson to get supplies, they see some hockey being played, and Kitoo even finds damaged roller blades that he is allowed to take home, and the team even gives him some chipped wheels to help. Kitoo starts to practice hockey, and when he gets a chance to travel to Nairobi, he gets to give ice hockey a try. This is based on an event at Mr. Mutinda’s orphanage when Canadian hockey players visited. ” [chapter book, ages 6 and up]

Tales of a Sixth Grade Muppet by Kirk Scroggs

The book he picked from the last list is Tales of a Sixth Grade Muppet by Kirk Scroggs. His mom says it’s a read together book but that it’s going well. After this, she’s going to try hockey books. We’ll keep you posted on what he likes.

What about you? Are you facing a pull-your-hair-out reluctant reader challenge? I’d love to help! Just tell me what books your child liked and any interests and I’d love to find you some books.

There were a few in the popular Matt Christopher sports series.

Chris, who is small for his age, is picked to be on an all-star hockey team where he overcomes prejudice and develops strong friendships.

And two biographies as well!

On the Ice with … Mario Lemieux, Matt Christopher Biographies

On the Ice with … Wayne Gretzky, Matt Christopher Biographies

Ice Time: The Story of Hockey by Michael McKinley

Hockey is breathtakingly fast and fascinating. Ice Time: The Story of Hockey (Temps de glace: Histoire du hockey) traces the sport from its hotly-contested origins to the present day’s first-ever lockout of players by the one remaining league.

It covers the sport’s surge in popularity after 1875 when it moved to inside rinks; the rise and fall, and rise again, of women’s hockey; the sagas of long-lost leagues, such as the Pacific Coast Hockey Association; and more recently the World Hockey Association.

Through its lavishly illustrated pages skate the players, the coaches, and the almost forgotten legends who are the reason why we love the game.

This is a series about a boys’ hockey team with a mystery twist. Here’s an example:

Power Play in Washington: The Screech Owls are in Washington, D.C., for the International Goodwill Peewee Championship – and Nish is about to become a “news flash” seen round the world! Literally. Because the craziest Owl ever has a brand-new plan: to streak the White House.

His way into the White House, he believes, is through the Screech Owls’ new friend, who not only plays center for the Washington Wall but just happens to be the son of the U.S. president!

It is a hockey tournament with a difference: secret-service agents, sniffer dogs, metal detectors, worldwide media attention – and the most cunning political assassination plan in modern history.

When the Owls head for a “normal” kids’ day out with their new friend, the president’s son, they have no idea they are about to get involved in a dangerous international power play, with murder the real game plan of their opponents. [ages 9 and up]

Pittsburgh Penguins star Sidney Crosby has been dominating the ice for most of his life. He learned to skate when he was three, and by age seven, his talent had captured the attention of newspaper reporters. In 2005, he was the number one pick in the NHL draft.

Since then he has broken multiple scoring records in the pro league. Called the best in the league by his peers and fans, Sidney knows there’s more to success than just skill. As captain for the Penguins, Sidney has to work hard and be a good leader.

Learn more about the incredible life of one of the NHL’s best players. [ages 7 and up]

What do a scientist, a screenwriter, and a hockey team all have in common? A chicken!

Milo has a problem. He’s trying to do a project on the food chain, so he charts the growth of a baby chick, and makes arrangements to serve his specimen to the judges at the science fair. But he’s baffled by the rest of his class. They name the chick Henrietta and sign up to take her home on weekends.

They claim that she’s a good luck charm, a friend, even the new hockey team mascot! Milo just wants to win the science fair to impress his dad. But when the class finds out that Henrietta will be cooked and eaten for Milo’s project, everyone panics! [grades 4-6]

This looks more like YA to me but might be great for a few years from now if hockey is still his passion.

Next, I consulted library lists. This one is from Skokie.

A series with hockey action and surprise endings that will the reader hungry for the next book.

Paperback BBailey City is filled with some unusual grown-ups, but could the new hockey coach actually be Frankenstein?

Mike is a terrific hockey player on a horrible team, but if he can’t stop being a tough loser, he might just lose his place on the team.

Eric is one of his team’s best players, fast and dangerous, but could he be too violent for hockey?

When a famous hockey player comes to town to open his own rink, the Boxcar Children must discover who is trying to stop his plans!

This non-fiction book is filled with unusual and funny stories, from the time a fan threw a squid at the referee to the time the Montreal Canadiens left the Stanley Cup on the side of the road.

My First Book of Hockey

The illustrations combine photographs with speech bubbles and attention-grabbing graphic lettering. This is the perfect book for someone new to hockey … either a player or a player explaining their sport to a parent, friend, or younger sibling.

Although this book works for a child as young as 4, it’s also appealing for older kids who are new to the sport. [nonfiction picture book, ages 4 and up]

Hockey Then to Wow!

Hockey fans will enjoy the illustrations and photographs in this book chronicling the rise of hockey starting in the 19th century up to the present time. Notable players, stats, and teams are covered, showing the greatest moments of hockey thus far. The evolution of gear from goalie masks to skates is also fascinating.

This is a book for readers to flip around in and enjoy when they are not on the ice. [nonfiction picture book, ages 8 and up]

For kids who like Guinness Book of World Records AND play hockey, this is the perfect combination! It has the ultimate Top 10 rankings of every possible hockey-related category that a fan would want. The rankings are not arbitrary either!

Sports Illustrated polled its hockey experts to determine the best rivalry, best single-season team, and best game in history.  [nonfiction, ages 6 and up]

Thank you to my Twitter friend who suggested this one:

The Hockey Sweater by Roch Carrier

March Madness: Basketball Books for Girls and Boys, Ages 4 and Up

Poetry in Sports Books for Kids

12 thoughts on “Hockey Books for Kids”