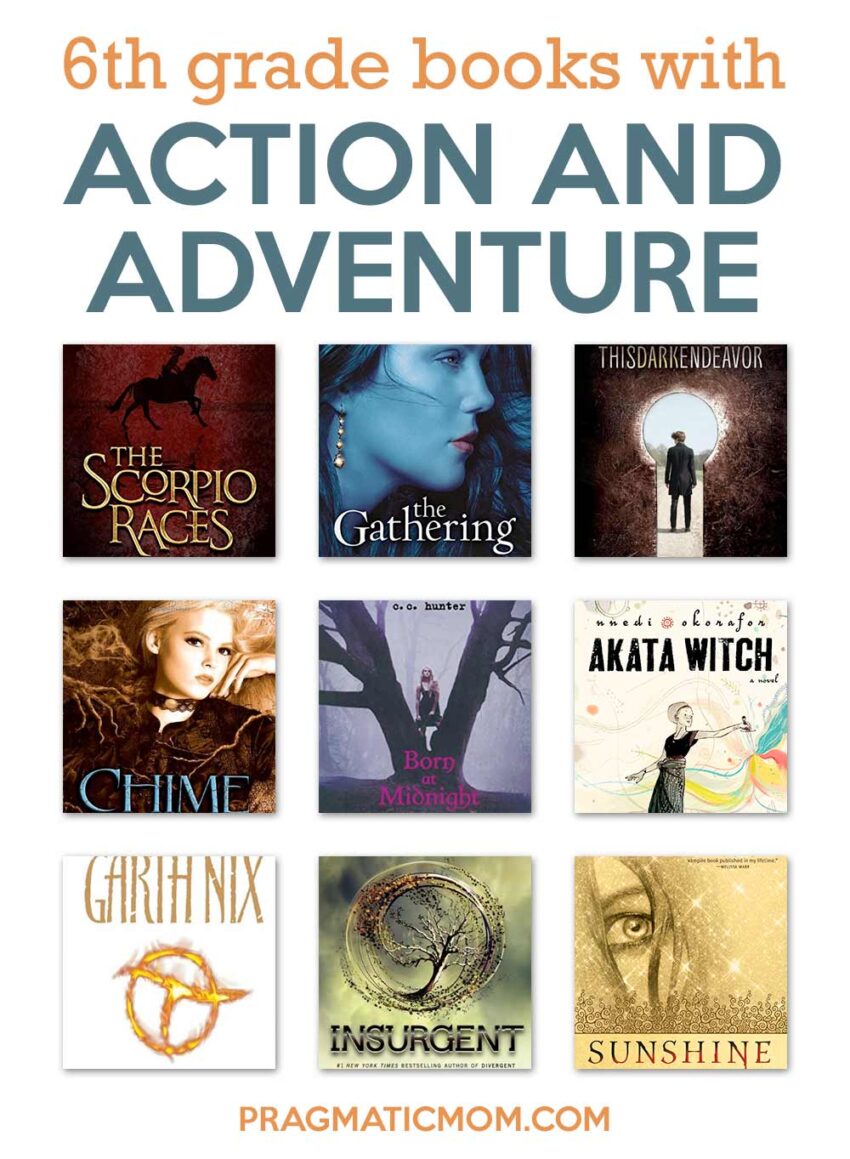 The cobbler’s kids have no shoes. That’s how I felt when my oldest announced that she has NOTHING to read so she might as well re-read The Hunger Games series for the 4th time and the Twilight series for the 2nd time. Oops. I thought I better have at it.

She doesn’t seem to like time travel (too confusing) nor chapter books with a science-y twist. She is willing to try most books and seems to have landed in YA territory but can still enjoy middle grade chapter books or YA that slant young. She’s 12-years-old and in 6th grade and I’m in no hurry for her to grow up. It’s time to get to work to keep her reading!

First stop: check out The Brain Lair for great middle school chapter book and YA recommendations from a rock star middle school librarian.

Second stop: check out our middle school rock star librarian‘s young adult — some which skew younger — recommendations for chapter book series under his categories of Fantasy and Horror/Supernatural.

Third stop: check out From the Mixed Up Files of Middle Grade Authors for middle grade chapter books (which I take to mean grades 3-8th)

Fourth stop: check out YA and Newbery 2012 winners.

This is my list for her. I’ll email it to her and have her make her picks and I’ll update with how I did as she cranks through them.

The Scorpio Races by Maggie Steifvater

This YA chapter book was a 2012 Printz runner-up. Maggie was the keynote speaker at KidLitCon 2010 and she’s hysterically funny and charismatic. I think my daughter will love this but I don’t think it’s going to be a series.

Some race to win. Others race to survive.

It happens at the start of every November: the Scorpio Races. Riders attempt to keep hold of their water horses long enough to make it to the finish line.
Some riders live.
Others die.
At age nineteen, Sean Kendrick is the returning champion. He is a young man of few words, and if he has any fears, he keeps them buried deep, where no one else can see them. Puck Connolly is different. She never meant to ride in the Scorpio Races. But fate hasn’t given her much of a choice. So she enters the competition – the first girl ever to do so. She is in no way prepared for what is going to happen.

The Gathering by Kelley Armstrong

Strange things are happening in Maya’s tiny Vancouver Island town. First, her friend Serena, the captain of the swim team, drowns mysteriously in the middle of a calm lake. Then, one year later, mountain lions are spotted rather frequently around Maya’s home—and her reactions to them are somewhat . . . unexpected. Her best friend, Daniel, has also been experiencing unexplainable premonitions about certain people and situations.

It doesn’t help that the new bad boy in town, Rafe, has a dangerous secret, and he’s interested in one special part of Maya’s anatomy—her paw-print birthmark.

This Dark Endeavour: The Apprenticeship of Victor Frankenstein by Kenneth Oppel

Victor Frankenstein leads a charmed life. He and his twin brother, Konrad, and their beautiful cousin Elizabeth take lessons at home and spend their spare time fencing and horseback riding. Along with their friend Henry, they have explored all the hidden passageways and secret rooms of the palatial Frankenstein chateau. Except one.

The Dark Library contains ancient tomes written in strange languages and filled with forbidden knowledge. Their father makes them promise never to visit the library, but when Konrad becomes deathly ill, Victor knows he must find the book that contains the recipe for the legendary Elixir of Life.

The elixir needs only three ingredients. But impossible odds, dangerous alchemy and a bitter love triangle threaten their quest at every turn.

Since her stepmother’s recent death, 17-year-old Briony Larkin knows that if she can keep two secrets–that she is a witch and that she is responsible for the accident that left Rose, her identical twin, mentally compromised–and remember to hate herself always, no other harm will befall her family in their Swampsea parsonage at the beginning of the twentieth century. The arrival of Mr. Clayborne, a city engineer, and his university-dropout son, Eldric, makes Briony’s task difficult. Clayborne’s plan to drain the swamp has made the Old Ones unhappy, particularly the Boggy Mun, who has plagued the village’s children with swamp cough in retaliation. When Rose’s lingering illness turns into a cough, Briony knows that she must do whatever it takes, even revealing her secrets, to save her sister. While thwarting the advances of an arsenic-addicted suitor, Briony must also deny her feelings for Eldric, even as he helps her solve the puzzle that has become her life. Exploring the powers of guilt and redemption, Billingsley (The Folk Keeper, 1999) has crafted a dark, chilling yet stunning world. Briony’s many mysteries and occasional sardonic wit make her a force to be reckoned with. Exquisite to the final word. Grades 8-12. –Angela Leeper

Born at Midnight by C.C. Hunter

One night Kylie Galen finds herself at the wrong party, with the wrong people, and it changes her life forever.  Her mother ships her off to Shadow Falls—a camp for troubled teens, and within hours of arriving, it becomes painfully clear that her fellow campers aren’t just “troubled.”  Here at Shadow Falls, vampires, werewolves, shapshifters, witches and fairies train side by side—learning to harness their powers, control their magic and live in the normal world.

Kylie’s never felt normal, but surely she doesn’t belong here with a bunch of paranormal freaks either.  Or does she?  They insist Kylie is one of them, and that she was brought here for a reason.  As if life wasn’t complicated enough, enter Derek and Lucas.  Derek’s a half-fae who’s determined to be her boyfriend, and Lucas is a smokin’ hot werewolf with whom Kylie shares a secret past.  Both Derek and Lucas couldn’t be more different, but they both have a powerful hold on her heart.

Even though Kylie feels deeply uncertain about everything, one thing is becoming painfully clear—Shadow Falls is exactly where she belongs…

So far, this has been her favorite! I’m buying the rest of the series for her.

I love this book description and that fact that it’s fantasy done in a magical realism kind of way!

Twelve-year-old Sunny lives in Nigeria, but she was born American. Her features are African, but she’s albino. She’s a terrific athlete, but can’t go out into the sun to play soccer. There seems to be no place where she fits. And then she discovers something amazing – she is a “free agent,” with latent magical power. Soon she’s part of a quartet of magic students, studying the visible and invisible, learning to change reality. But will it be enough to help them when they are asked to catch a career criminal who knows magic too?

Another pick from The Brain Lair.

Thank you to Abi for these great picks!

Has she read Sabriel by Garth Nix? I’d recommend that – it is fantasy, YA, skewing younger. Very well written, interesting, strong female lead.

How about Divergent by Veronica Roth? Again, YA that is actually tamer for a 12 year old than /Hunger Games/ and /Twilight/. Addictive, too!

Next book comes out this spring.

Thirdly, Sunshine by Robin McKinley is a creative and very different vampire story that seems right up her alley.

None of these books have complex narrative structures, they’re all really good, and they’re all juicily addictive with strange, carefully crafted worlds and strong female leads.