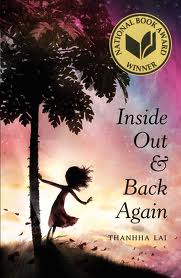 Please give a warm welcome to my librarian/blogger extraordinaire/Mom Friend The Fourth Musketeer! She graciously agreed to guest post on her favorite Historical Fiction chapter books of 2011. I really, really wanted her list because she’s an expert in children’s and young adult historical fiction, and selfishly, I wanted this list for myself and my kids! We will work our way through it in 2012!

How about you? What is your favorite historical fiction picture book, chapter book or young adult book? With apologies once again to Rogers and Hammerstein, here are a few of my favorite things (book-wise) from 2011. I have restricted myself to books reviewed here at The Fourth Musketeer. The books are presented in no particular order. Please note: these are not necessarily the books I think are “best” (whatever that means!) but rather books that I found personally compelling for one reason or another.

Jefferson’s Sons: A Founding Father’s Secret Children by Kimberly Brubaker Bradley (Dial Books for Young Readers). A must-read look at life at Monticello through the eyes of three of his slaves, two of whom were his sons by his slave mistress, Sally Hemings.

Between Shades of Gray by Ruta Sepetys (Philomel). In 1941, 15-year old Lina, her mother, and brother are taken from their Lithuanian home by Soviet guards and sent to Siberia, where her father is sentenced to death in a prison camp while Lina fights to survive. Based on the author’s own tragic family history.

The Berlin Boxing Club by Robert Sharenow (Harper Collins) In 1936 Berlin, 14- year old Karl Stern, considered Jewish by the government despite a non-religious upbringing, learns to box from the legendary Max Schmeling while struggling with the realities of life as a Jew in Nazi Germany.

Saving Zasha by Randi Barrow (Scholastic). In 1945 Russia, anyone who owns German shepherds is considered a traitor, but Mikhail and his family are determined to keep the beautiful dog a dying man brought them, while trying to keep the secret from Mikhail’s nosy classmate Katia.

Inside Out and Back Again by Thanhha Lai (Harper) In free verse poems, a young girl chronicles the life-changing year of 1975, when she, her mother, and her brothers leave war-torn Vietnam to resettle in Alabama.

For the Love of Music: The Remarkable Story of Maria Anna Mozart by Elizabeth Rusch (Triangle Press). A lovely picture book biography of the sister of the famous composer.

These Hands by Margaret H. Mason (Houghton Mifflin). Combines a little known piece of labor history and the civil rights movement with a tender portrait of a grandfather’s relationship with his grandson.

Flesh and Blood So Cheap by Albert Marrin (Knopf Books) 2011 marked the 100th anniversary of the Triangle Fire, the worst disaster in American labor history; Marrin brings the tragic events of that spring afternoon to life, setting the fire in a sweeping historical narrative encompassing not only the events leading up to the fire, but what happened afterwards.

Tom Thumb: The Remarkable True Story of a Man in Miniature by George Sullivan (Clarion Books) The fascinating story of the little person Charles Stratton, “discovered” by P. T. Barnum at the tender age of four, one of our nation’s first true celebrities.

Please click on image of book to view at Amazon. As an Amazon Associate, I earn from qualified purchases.