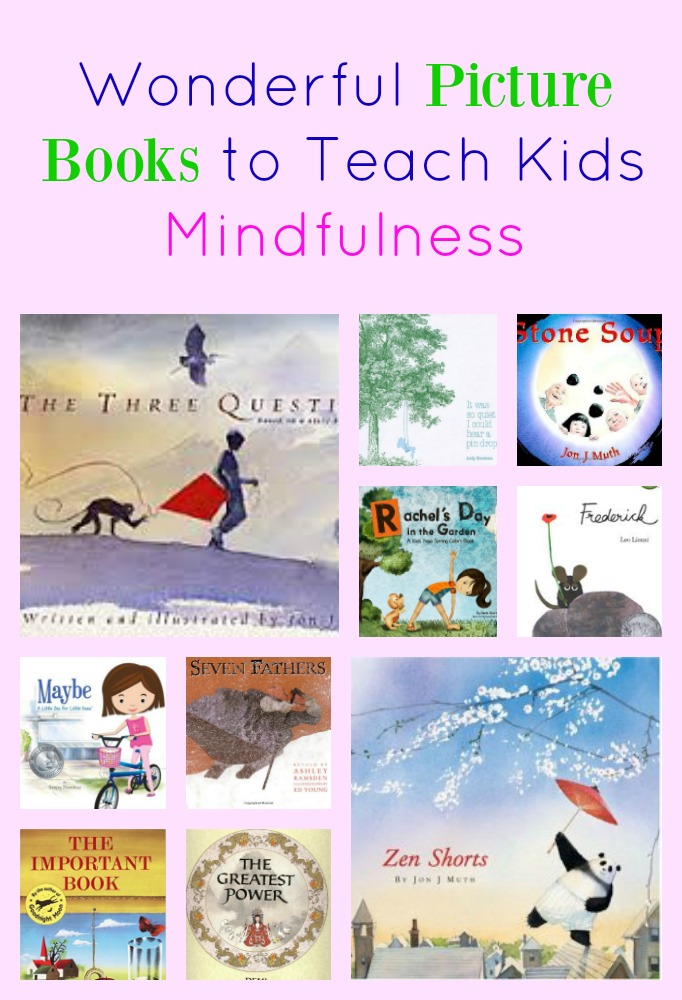 A picture book that my youngest enjoys that also gives something back to me is a joy indeed. These books have a Zen philosophy twist that will leave the adult pondering the meaning, often for days afterward, while our little ones happily move on to the next book or other activities unburdened with questions ruminating in their brains from these books. I actually got the idea for this list while in a Board of Directors meeting when the CEO quoted a parable from Jon Muth’s Zen Shorts. At first, I thought he was referring to the ancient Chinese philosopher Chuang Tzu that I knew he briefly studied in college. But no, it was this book that he had read to his little boy for a bedtime story. The story of Good Luck versus Bad Luck really stuck to him as it did to me too when I first read it.

There is something special about each of these books beyond an award-winning author/illustrator or just an enjoyable story. Some of the books bid us stop and smell the roses; others make us ask ourselves what really IS important in life? As my career coach often tells me when I am complaining, “Is there another way to view this? Can you see this thing that you are complaining about as a gift?!” Please enjoy these ten small gifts of stories. These are gifts that keep on giving.

Kaya learns from her mother how to quiet her mind so that she can hear the music inside of her. This is her heart song. When she frees the carved elephants on the carousel of the vines, this is also a metaphor for freeing her mind of clutter. Does the ride really go, or is this her heart song? [picture book, ages 4 and up]

The authors have written an engaging and entertaining book about Marvin, who is a calm and gentle character who notices things other people miss because they are distracted or too busy to care. When Marvin slowly eats his banana he notices the bright yellow outside and the sweet ripe inside. His grandfather doesn’t understand Marvin because he’s impatient with life, gobbles his food and is ready to move on to their next activity. [picture book, ages 4 and up]

Use this picture book to teach kids calming yoga poses. It has rhymes to describe each pose and detailed illustrations of how to get into the pose. Yoga unifies movement of the body with the mind and spirit. These gentle poses also help kids to wind down. [picture book, ages 4 and up]

A Morning with Grandpa by Sylvia Liu, illustrated by Christina Forshay

It’s a grandfather and granddaughter day! Mei Mei and her grandfather teach each other mindfulness exercises. Mei Mei shows her Gong Gong yoga and he teaches her tai chi. This charming picture book shows the loving bond of an intergenerational Chinese American family and the passing of different cultures from one generation to another and back again. [picture book, ages 4 and up]

My son’s preschool assistant teacher adored this book and so when she retired, a copy was given to her. She loved this old-fashioned book because its message to her was that everything around you is important, especially you, the preschooler. And to stop and smell the flowers. And that is a very important message. [picture book, ages 2-6]

This was not my children’s favorite Leo Lionni book; they loved Swimmy and just about any of his stories involving rabbits. Frederick, however, was my personal favorite. I loved that Frederick is a dreamer and poet and that he did his fair share of work in a different kind of way — emotionally not physically. When the mice gather up supplies for winter, Frederick gathers up words and images which the other mice view as “goofing off.” But the supplies run low towards the end of the winter and Frederick is called upon for his contribution, his images and words warm the mice such that they declare him a poet. [picture book, ages 2-7]

8.  Maybe: A Little Zen for Your Little One by Sanjay Nambiar

If you like the Zen Shorts fable “Good Luck/Bad Luck” which is my favorite adult-pondering-zen story of all time, but you don’t think that your child will relate to this story, then Maybe might be for you. It’s the same story but set in an elementary school (or preschool) setting with an updated twist switched up from wild horse to bicycle. What might read as unrealistic is the girl who is wise beyond her years, responding to each setback or gift with the single word, “Maybe.” Still, it puts a little zen into modern life which perhaps might make children rethink their luck, both good and bad. The book is $16 but the lesson is priceless! [picture book, ages 4 and up]

7. Rachel’s Day in the Garden by Giselle Shardlow, illustrated by Hazel Quintanilla

Join Rachel as she and her adorable puppy look for signs of spring in the garden. Crawl like a caterpillar, buzz like a bee, and flutter like a butterfly. Discover spring, explore movement, and learn the colors of the rainbow! [picture book, ages 3 and up]

This is a Zen twist on the stone soup story. Three wise Buddhist monks happen upon a village where its people are suspicious of everyone and only take care of themselves. In making stone soup and for the community by sharing what they have, the villagers learn that happiness is a simple as soup from a stone. [picture book, ages 4 and up]

5. It was so quiet I could hear a pin drop by Andy Goodman

It’s not easy to find mindfulness picture books for kids, but slowing down is so good for them. Why not start a simple meditation practice by using this book. Just read along and have them focus on listening to the sounds around them. The very quiet ones and the loud ones too.  [picture book, ages 2 and up]

4. The Greatest Power by Demi

In this sequel to The Empty Pot, Ping is now emperor, and is contemplating what is the greatest power, saying that “A wise person must be able to see the unseen and know the unknown.”  He calls for a parade for each person to show him what they think the greatest power is. Could it be money, technology, beauty or WHAT? Sing has the answer with a lotus seed that she breaks in half:  “The nothing in this seed is the space in between where life exists.” The circle of life is her answer. Demi’s illustrations, as always, are so gorgeous. [picture book, ages 4 and up]

3. The Three Questions by Jon Muth based on a story by Leo Tolstoy

Nikolai asks himself three questions about how to be a good person but doesn’t have the answers: What is the best time to do things? Who is the most important one? What is the right thing to do? His animal friends have answers for him, but still, he’s not sure. He asks Leo the Turtle because he’s an ancient creature. In helping Leo with his garden, Nikolai learns the answers he’s been seeking. [picture book, ages 4 and up]

This fable is gorgeously and perfectly illustrated to this story that isn’t what it seems. On the surface, a traveler is seeking shelter from a snowstorm and it would seem that he might die if he doesn’t find it. He happens upon a house in the distance and must ask seven generations of fathers for permission to take shelter in their home. Each father is more ancient than the last; the final father is just a speck of dust. They grant him permission and a magical feast appears plus the fathers transform into the age and size of the traveler. They present their crowns to him and then he goes off to sleep. What happens next? We don’t know. That’s the Big Question!

On the one hand, this COULD be the story of the afterlife and the traveler doesn’t make it after all. The speck of dust could indicate the circle of life.

My little son took the story at face value of just a magical adventure and he liked it very much. As the reader, I enjoyed how the illustrations conveyed the ambiguity of the story perfectly as well as set the tone of the book. And I’m still pondering what happens next. Another interpretation is that because the traveler was so polite and sought out permission seven times despite his exhaustion that he was rewarded at the end with the feast (and maybe the Seven Fathers are magical) and this is some kind of test. We just don’t know the ending. That’s maddening but also it is what makes this book so interesting! [picture book, ages 4 and up]

This book came up in a business meeting I was in when the CEO was asked about how a particular business unit was performing. He likened the zig-zag path the unit had taken by telling the story of “Good Luck, Bad Luck” that is the second story in the book. Which is to say that sometimes good luck turns out to be bad, and vice versa. You can’t really tell what kind of luck you have since something that appears lucky may have negative repercussions down the line and vice versa. It turns out that he had read this book to his young son and the story stuck with him. I find that I think about this story a lot, too and who knew that children’s lit would be applicable in a boardroom?! [picture book, ages 4 and up]