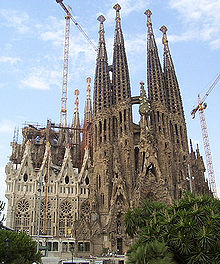 The children’s books that I selected are old-fashioned from a by-gone era so I am spinning the rest of this post into the modern world.  We’ll start first with a dizzying tour of modern Spanish furniture, and then onto the hottest food scene in the world.  According to my favorite foodie snark, Anthony Bourdain, Spain is where it is at for the foodie scene.  Forget France, that is so last year! The maestro is Ferran Adriá and I have an easy recipe from his blog as well a few other fun things.  To finish up, we’ll see some Spanish creatives; architect Gaudi and artists Miró, Picasso, and Velázquez.

I am planning a trip to Barcelona next year for two reasons:  my kids have studied Spanish for YEARS so it’s time to take off the training wheels and my husband and kids are obsessed with Barcelona soccer.  I told my Spanish tutor about my travel plans yesterday (she’s from Argentina).  The first thing she says is “Messi?!  You guys are going to see Messi?!”  And she was right!  My kids cheered for Argentina throughout the World Cup, not Korea where their father was born, not the U.S., and not Spain though they root for Barcelona. It was Argentina because of Lionel Messi.

So forgive me if my post slants a little towards Barcelona.  Of course, the irony:  they speak Catalan there, which is closer to Latin.  [Catalan was the official language of the kingdom of Aragon between 1137 and 1749, Catalan is now co-official (with Spanish) in Catalonia, Valencia, and the Balearic Isles. It is the only official language in the state of Andorra.]  We’ll see if we can’t practice our Spanish there somehow!  I hope you enjoy our trip!

The Story of Ferdinand by Munroe Leaf, illustrated by Robert Lawson was a childhood favorite picture book of mine that sadly, does not seem to translate to this generation.  I’m not sure if it’s the black and white illustrations which, by the way, are spectacular pen and ink drawings by notable author/illustrator Robert Lawson.  My kids are used to four-color.  It could be that the story is too slow but I love how they bring out all the different costumed bullfighters, each with their specialty.  Maybe bullfighting is not P.C.?  I can understand that and maybe my kids feel sorry for the animals. I still love this book.  The underlying message, though, is great:  be true to yourself.  This message never ages!  [picture book, ages 4-7]

I, Juan de Pareja by Elizabeth DeTrevino is a Newbery Award-winning historic fiction novel about a black slave in the 17th century Spanish Court that ends up apprenticing for the great painter Velázquez and also hobnobbing with other notables Rubens and Murillo.  [chapter book, ages 9-12]

Here is a link to an excellent article but as they say, picture speak a thousand words… He is the head chef of the El Bulli restaurant in Roses on the Costa Brava, and is considered one of the best chefs in the world.  And that is kind of like saying Picasso was a pretty good artist.  Here’s his blog.  If you have 15 minutes, here’s a great video by English food journalist on his Ferran Adriá experience, here.

Here is a recipe from his blog that is managable.  And yes, I had to look up calçotada.  Calçot is a variety of green onion known as Blanca gran tardana in the Catalan language.  The most traditional way of eating calçots is in a calçotada (plural: calçotades), a popular gastronomical event held between the end of winter and March or April, where calçots are consumed massively.  Calçots are then barbecued and dipped in salvitxada or romesco sauce, and accompanied by red wine or cava. Pieces of meat and bread slices are roasted in the charcoal after cooking the calçots.

I am thinking that ramps are a reasonable substitute or green onions if you just want to try this sauce right now in the winter.

We did a calçotada with romescu great. I leave the sauce recipe to improvise, to not have all the ingredients, but it was delicious:

Preparation:
Put the oven to heat and roast the tomatoes, peppers and garlic.
Chop almonds and toast a little in a frying pan.
In a blender, shred the crumb of the loaf.
We are adding to the mixer, gradually, a little oil, salt, pepper, almonds, tomatoes, peppers, and roasted garlic.
You can edit to taste with salt and oil, but do not overdo it, testing it see if that.

The iconic Spanish Artists:  Miró, Gaudi and, of course, Picasso.  And Velázquez for those who read the book selection. Antoni Gaudi, a Catalan architect who worked during the Modernisme (Art Nouveau) period but became famous for his unique and highly individualistic designs regarded as beyond the scope of Modernisme. Pablo Picasso was a Spanish painter,draughtsman, and sculptor who lived most of his adult life in France. He is best known for co-founding the Cubist movement. Diego Rodríguez de Silva y Velázquez, for those who read I, Juan de Pareja. He was a Spanish painter who was the leading artist in the court of King Philip IV. He was an individualistic artist of the contemporaryBaroque period, important as a portrait artist.