I was combing the bookshelves to clean them out and ran across our little pile of Christmas books that I’ve save through the years.  I read them last night to my youngest but my oldest, now 11, saw the pile and took her favorite, Auntie Claus, to read even though she was supposed to be studying for a test.  She returned it  10 minutes later with the pronouncement, “That is a good book.”  This is a particularly good book for responsible older sisters, particularly the self-sacrificing type,  which might explain why she loved it.  It will always be on our shelves at Christmas for her because that is the power and magic of picture books: You Never Out Grown Them!

While these books are not an annual tradition (yet), I must remember to pull them out each year to create one.

Do you have a favorite holiday book?  Will you please share it by leaving a comment?  I will add it to the list with your message.   Happy Holidays to All!

Sophie and Chris Kringle are part of a famous family but they need a lesson in the true meaning of Christmas because they get too many presents and are completely spoiled and ungrateful.  Sophie’s glamorous Auntie Claus tries to teach her by inviting her to tea but it’s her Aunt’s mysterious job that provides the opportunity for Sophie to join her Aunt up North to  pitch in as an elf  and finally learn the Number 1 Lesson:  It’s far better to give than receive.”  [picture book, ages 4 and up]

The Polar Express by Chris Van Allsburg
Chris Van Allsburg is one talented guy.  If you look at all his picture books and see his ability as an artist to create in a range of medium it would blow your mind.  And then add in talent as a story teller and it’s not surprising that not only has he won a slew of coveted awards — Caldecott! — but he’s never written even a mediocre book!  They are all truly excellent.
I never saw the movie and I just read The Polar Express again last night with my 6-year-old son.  This book strikes me as a particularly good book for boys, especially those enthralled by trains.  In the story, a boy on Christmas Eve  gets invited on a special train to meet Santa Claus, The Polar Express.  He gets chosen to make the first Christmas wish and he selects, out of anything in the world, just one jingle bell off the reindeer’s harness because he’s always wanted to hear the bells but was never able to.  Alas, when he gets on the train, the bell is gone. It has fallen out of a hole in his bathrobe and the boy returns home in time for Christmas.  There is one small package found under the tree after all the presents have been opened.  It’s the bell with a note from Santa who found the bell on his sleigh (and a reminder to get that pocket fixed).  He rings the bell and it makes a beautiful sound.  Strangely, his parents can’;t hear it.  It turns out, only those who believe can hear the bell. [picture book, age 5 and up]
Here’s a letter from Chris Van Allsburg on the magic of this book: 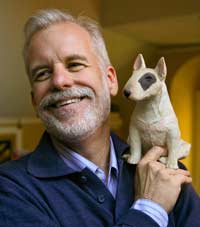 Over the past twenty-five years, many people have shared stories with me about the effect that reading The Polar Express has had on their families and on their celebration of Christmas.

One of the most poignant was told to me five or six years ago at a book signing in the Midwest, on a snowy December evening. As I inscribed a book to a woman in her sixties, she told me that it was the second copy she had owned, and wanted to know if she could she tell me what had happened to the first. “Of course,” I answered.

A dozen years earlier the woman, who had no children of her own, befriended a neighbor, a boy of about seven, named Eddie. He would often cross his driveway to visit her.

She had a collection of picture books, which she read to him, but around the holidays, the only story he ever wanted to hear, over and over, was The Polar Express. One year she offered to give him the book, but Eddie declined because he wanted to hear her read it aloud to him, which she continued to do every year until the boy and his family moved away.

Years later the woman learned from a mutual acquaintance that Eddie had grown up and become a soldier. He was stationed in Iraq. Since Christmas was approaching, the woman decided to send him a gift box. She included candy, cookies, socks, and her old copy of The Polar Express. She wasn’t sure what a nineteen-year-old battle-weary soldier would do with the book in an army barracks in the Middle East, but she wanted him to have it. A month later, after the holidays had passed, she received a letter from Eddie.

He told her he was very happy to have heard from her and to get the box of gifts. He had opened it in his barracks, just before curfew, with some of his fellow GIs already in their bunks. A soldier in the next bunk spotted the book. He knew it well from his own childhood and asked Eddie to read it. “Out loud?” he asked. “Yeah,” his buddy told him.

Eddie, quietly and a little self-consciously, read The Polar Express. When he’d finished and closed the book, a moment of silence passed. Then from behind him a voice called out, “Read it again,” and another joined in, “Yeah, read it again,” and a third added, “This time, louder.” So Eddie did.

Olive, the Other Reindeer by Vivian Walsh

This was our favorite book because it’s silly.  It might be just me, but I get mixed up all the time.  I am especially bad with faces and always think get strangers confused with people that I actually know or see a resemblance to a famous person that no one (OK, I mean my husband) just can’t understand.  So I can really relate to Olive, who thinks she’s Santa’s other reindeer because … of this song:

It’s this line:  All of the other reindeer …

but Olive hears:  Olive, the other reindeer…

And who could blame her?  I mean, I hear my name out loud constantly, too! (When it’s not being said).

Olive takes several buses to the North Pole and joins the reindeer line-up and thank goodness she does, but she turns out to be most useful!  Santa would not have been able to make his scheduled deliveries without her!

[pop up picture book with scratch and sniff stickers!, ages 3 and up]

We’ve been reading How the Grinch Stole Christmas as an iPad eBook app, and I think there is actually a benefit to the Oceanhouse Media eBooks. Not only are the voice talent OUTSTANDING and really make the book come alive, but you can touch any image on the page, and the word of that image will float across the page. If the narrator isn’t reading, you will also hear the word.

In addition, the words light up as they are being read. I think this is a subtle way for kids to increase their word recognition, but it’s so fun that they don’t think that they are “learning.” The iPad app is $4.99 so it’s also a cost-effective way to own this book.

This is the 50th Anniversary edition for $17.

My kids have also enjoyed the Dr. Seuss game apps. They play off the books, and while they are not educational, my kids think they are really fun.

Dr. Seuss Camera app for iPod Touch/iPhone/iPad. This works best for the iPhone because your child takes a picture of someone and then turns them into a relative of the Grinch by placing the face into templates. $.99.

Up with a Fish game app for iPod Touch/iPhone/iPad is a stacking game of dexterity. You stack all the items from The Cat in the Hat EXCEPT for Thing One and Thing Two. If the Things get on the stack, they knock it down. $.99.

Dr. Seuss Band is their latest game app. You will need iOS 3.2 (and higher) and iPhone3GS. It lets you create music by using instruments and silly effects. There are over 120 combinations of sounds to play with. It’s also $.99.

p.s. I wanted to add one more book that I heard about from the Fourth Musketeer, a children’s librarian with great taste in KidLit! This is her review:

Jingle Bells: How the Holiday Classic Came to Be  by John Harris

No matter what our religious affiliation, we all know the much-loved holiday song, Jingle Bells, a favorite not only for Christmas albums but also sung at every elementary school sing-along.  But how did this famous song get written?

Author John Harris was inspired by a historic marker he saw on a visit to Savannah, Georgia, to do a little investigating as to the history of the classic tune.  He saw a marker about the history of the song, written by James Pierpont, music director at the Unitarian Church in Savannah in the 1850’s.  This story is fictional, but inspired by actual facts.  Harris imagines that Pierpont composed the song in the middle of a Savannah heat wave.  Pierpont, in Harris’ story, is an abolitionist, worried about violence surrounding his church because of their anti-slavery policies.  He’s homesick, too, for New England, and tries to explain to his young daughter what snow is like, and the sound of sleigh bells.  Suddenly, he’s inspired to write a new song for the Thanksgiving day concert at church!