I know that I was a little vague in my post, Lessons From the Dog Park Applied to My Blog, about Teach Me Tuesdays in that I simply proposed that we learn together.  Then I remembered the advice that DesignTrackMind gave me:  “Explore different countries.  Add in fashion and interior design.  Recipes are good but you HAVE to make it first.”  Don’t you love it yet hate it when you get advice so dead on that it calls you out?  Like I’d post a recipe that I’ve never made myself??!!  Ok, she knows me too well. Totally busted.

So let me know what you think of the format of this post.  Want more history?  I can do that!  Want more interior design?  I can do that too. DesignTrackMind did offer to help…  Alternately, if this is waaay too much information for you, please let me know this as well ’cause it did take me a really, really long time to put this together.

This Tuesday, we are exploring the country of Bangladesh, a country I knew so little about that I didn’t actually know how to spell it. Thank you spell checker!  I do have a friend from Japan who was born and raised in Bangladesh.  He speaks perfect English, Japanese, and Bengali, so clearly he’s among the elite of his countrymen.  My other Bengali experience is when I had the great pleasure of meeting author Mitali Perkins when she visited my 3rd grade girls’ book club (she does school visits also).  During the book club meeting, Mitali captivated the girls and boys (3rd Grade Boys Book club also attended) with stories about growing up in Bangladesh as well as the power of microlending that is transforming the country today so I included a picture book on that as well.  The main character in her book, The Rickshaw Girl, is the best painter of alpanas in her village and this proves to be a transformative skill.

Personally, I find the alpanas stunning.  I hope they inspire the inner artist in you or your child.  Our book club activity was creating our own Alpanas by painting white designs on brown tag board and the results were incredible.  I wish I had saved my daughter’s!  In Bangladesh, women also create alpanas using colored spices and powdered rice and I’ve included some gorgeous examples below. Today, you will notice how the designs in the alpanas are applied to things like jewelry. I’ve included the talented contemporary jewelry designer, aptly named Alpana Gujral, should you need holiday gift ideas.

Finally, my Coop Preschool Mom Friend gave me the recipe for my favorite Spicy Indian Chickpeas called Chholey.  And yes, I’ve made them and they are delicious but mine are never as good as my Mom Friend.  Some things just don’t translate!

A Basket of Bangles by Ginger Howard and Cheryl Kirk Noll.  This picture book demonstrates the power of micro-lending and the huge impact it can have improving impoverished lives in Bangladesh.  The book is out of print but might be at your local public library.  This book would be great for grades 3-5 though, as a picture book, the writing and pictures would connect with a younger audience through the idea of poverty and micro-financing might be too advanced for them. [picture book for ages 6-12]

Rickshaw Girl by Mitali Perkins. Naima is a ten-year-old girl, too young and the wrong sex to help her impoverished family with their family business of pedaling a rickshaw.  Her father is ill and there isn’t much money for the medicine he needs so Naima tries to pedal the heavy rickshaw.  Disaster happens and the rickshaw, their family livelihood, is damaged.  Naima ultimately finds that she can use her talent as an artist, honed by creating the best alpanas in her village, to help create a better life for her family.  [chapter book, ages 8-12]

I knew so little of Bangladesh history that I searched online for information and found a useful but brief summary from Bengla2000.  I’ve further condensed it to four paragraphs but please go to the site if you want more information.  Who knew that Bengal was a wealthy and prosperous country during the 16th century but was decimated by a series of invaders including Turkistan, Great Britain, and Pakistan??!!

“Bangladesh came to today’s shape through a long history of political evolution. Bengal was probably the wealthiest part of the subcontinent up till the 16th century. The area’s early history featured a succession of Indian empires, internal squabbling, and a tussle between Hinduism and Buddhism for dominance. All of this was just a prelude to the unstoppable tide of Islam which washed over northern India at the end of the 12th century. Mohammed Bakhtiar Khalzhi from Turkistan captured Bengal in 1199 with only 20 men.

The decline of Mughal power led to greater provincial autonomy, heralding the rise of the independent dynasty of the nawabsof Bengal. Humble East India Company clerk Robert Clive ended up effectively ruling Bengal when one of the impetuous nawabs attacked the thriving British enclave in Calcutta and stuffed those unlucky enough not to escape in an underground cellar. Clive retook Calcutta a year later and the British Government replaced the East India Company following the Indian Mutiny in 1857.

Inequalities between the two regions i.e. East and West Pakistan soon stirred up a sense of Bengali nationalism that had not been reckoned with during the push for Muslim independence. When the Pakistan government declared that `Urdu and only Urdu’ would be the national language, the Bangla-speaking Bengalis decided it was time to assert their cultural identity. The drive to reinstate the Bangla language metamorphosed into a push for self-government and when the Awami League, a nationalistic party, won a majority in the 1971 national elections, the president of Pakistan, faced with this unacceptable result, postponed opening the National Assembly. Riots and strikes broke out in East Pakistan, the independent state of Bangladesh was unilaterally announced, and Pakistan sent troops to quell the rebellion.

The ruined and decimated new country experienced famine in 1973-74, followed by martial law, successive military coups, and political assassinations. In 1979, Bangladesh began a short-lived experiment with democracy led by the overwhelmingly popular President Zia, who established good relationships with the West and the oil-rich Islamic countries. His assassination in 1981 ultimately returned the country to a military government that periodically made vague announcements that elections would be held `soon’. While these announcements were rapturously greeted by the local press as proof that Bangladesh was indeed a democracy, nothing came of them until 1991. That year the military dictator General Ershad was forced to resign by an unprecedented popular movement led by the Bangladesh Nationalist Party and the Awami League.”

These stunning creations are made from ground rice and spices and are created by women or girls in celebration of the Hindu holiday, Diwali, the festival of lights (a.k.a. Dawali or Deepavli).  Click here for more information about Diwali from Wikipedida.  We made alpanas for our book club meeting on the Rickshaw Girl by Mitali Perkins.  Here’s what you need:

We did not attempt the colored spice version.  You could try that if you are a brave soul, but that sounded awfully messy to me!  If I were to do that, I’d probably use stick glue or white glue with paint brushes and purchase ground spices at a discount store.  To create the designs, I would have the children create the first shape with the glue, sprinkle the spice over the glue, and shake off the excess. Yes, it probably would create an epic mess!  Another idea is to let them draw them on paper using crayons, paint, oil, or chalk pastels.

Here are some gorgeous examples.  Isn’t is amazing how creativity is like a beacon that can brighten any environment, no matter how poor? And from such humble materials, something so visually stunning can be created? Holidays are approaching so jewelry ideas might be appropriate here?!  I found a jewelry designer aptly named Alpana Gujral who has gorgeous stuff evocative of alpana patterns.  Here’s the link to her site and blog. I wish I had more images of her jewelry but they were impossible to hijack from her website.  If you go to her website, be sure to see her Necklace Sets and Bracelets.  They are going to be on my Christmas wish list! Basha’s high quality, unique kantha products are handmade by strong women in Bangladesh, many of whom are survivors of human sex trafficking. The women complete a training and rehabilitation program prior to beginning work. Basha also provides educational opportunities including literacy and life skills programs. The artisans receive medical support, counseling, and daycare assistance. 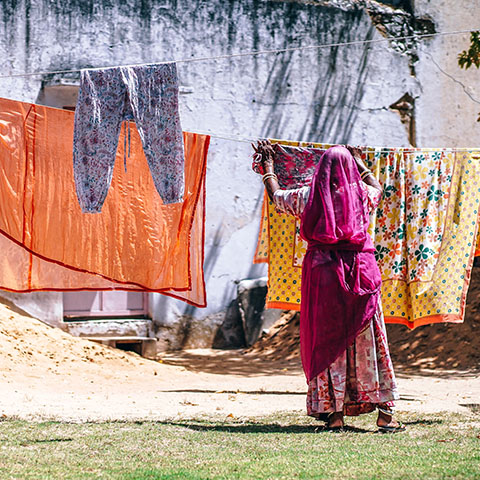 I love Indian food but my husband does not so I usually eat the kind out of pouches when I need a fix.  I am sorry that I don’t have a recipe that is specific to Bangladesh, but I learned from the history that culturally, that the cuisine is SPICY and resembles East Indian food.  Vegetarian curries such as Chholey are a staple.  For more information on Bangladeshi cuisine, click here.

1) Soak the dried chickpeas overnight and boil them until tender OR used canned ones.  (I use canned).

3) Heat 1 tablespoon of the oil in a wok and heat it using medium high heat.  Add cloves, cinnamon, and cumin seeds.  As they sputter, add the onions. Cook onions until lightly brown in color, about 10 minutes.

4) Add ginger and garlic and saute for two minutes then add tomatoes and stir them until the juices are released.  Turn off heat and let the mixture cool down.

5) Use food processor or blender and pour in mixture from wok.  Process or blend until the mixture forms a paste.

6) Using the same wok at low heat and add another tablespoon of oil and heat it.  Add the paste to the oil.  Keep stirring until the sides of the paste is leaving oil.

8) Add a little water if the mixture is dry.

11) Garnish with fresh cilantro if you wish.

This freezes nicely.  From Kashmira, my Coop Preschool Mom Friend.

I hope you have enjoyed this brief trip to Bangladesh.  Please  leave me comments on what you think and give me suggestions for changes to the format or suggestions for other places to visit.  I would love your recipes also!!!  THANK YOU!!!