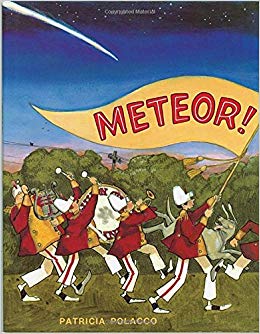 I found this book a while ago in the discounted book room of my favorite book store. I will pretty much buy any picture book by Patricia Polacco. Her advanced picture books are based on her life and the people that she knows. I knew that, but for some reason, I thought this book was set back in time — say around the 1800s — where a village spotted a meteor! Suffice it to say that I should not judge a picture book by its cover.

This book, in fact, is about the meteor that landed on her grandparent’s farm during the time she and her brother were visiting (and her mother was going through a divorce). The meteor was real and the farm is in Union City, Michigan. Patricia Polacco even held a meteor festival this past July.

If you read this book with your child and it elicits interest in all things meteoric, then please explore the science of meteor links below. If you happen to find a real meteor (and a link to find out if your meteor is real is below), you can even sell it on eBay!

When Patricia and her brother were young, they visited their grandparents’ farm in Union City, Michigan while their mother was going through a divorce. It’s a little village in the middle of nowhere. One day, an actual meteor fell to the ground right on their farm! This is a true story and the meteor was confirmed as such by scientists! [advanced picture book, ages 6-12]

Yes, there are tons of pieces of meteorites for sale on eBay!

If you think you’ve found a meteor read this: Meteorites and Their Properties by David Kring

What are Meteorites Made Of?

Learn about meteors by well-known nonfiction author Melissa Stewart! This book is chock full of photographs and fascinating information. [nonfiction picture book, ages 6 and up]

Field Guide to Meteors and Meteorites by O. Richard Norton

Meteor hunters will find this field guide indispensable in observing, locating, and analyzing meteors and meteorites. Kids will find it a useful resource for specific topics. It is too dense for most kids to read through cover-to-cover. [adult book]

A great fiction chapter book that I just finished is Every Soul a Star by Wendy Mass for older kids with an interest in Astronomy. Meteors, comets, and other astronomy topics are woven into this book about eclipse seekers. Wendy Mass is just a really great author!

“Annie loves to hang out with her friends in 1985. They have campouts, go on adventures, and occasionally get in trouble for doing things like climbing silos. Her mother thinks that as she approaches middle school, she should be more ladylike, but Annie disagrees. So do her friends Beans, Fynn, and Rocky. When Fynn’s cousin Scarlet is visiting when the Scouts are prepared to watch a meteor shower, they have to bring her along. The meteor shower is great, but the kids think they see a meteor go down. The calculations indicate it’s fifteen miles away, so why not go in search of it. Leaving a series of notes that insure that it will be well into the next day before any adults can locate them, they pack supplies and head off on foot. Annie isn’t happy that Scarlet is along, especially since the boys act differently around a girl– she’s just Annie. Not only are there skeletons in caves, teens with three-legged dogs, a suspiciously criminal family and mysterious silver dust from the meteor, but the kids have their own problems. Fynn’s divorced mother and Rocky’s widowed father are dating, and Bean’s family is in danger of losing their home. Annie is worried that her group of friends will fall apart, but the trip reinforces rather than breaks their bond.” [middle grade, ages 8 and up]

“Liberty’s parents are both interested in hiking, camping, and outdoor pursuits; her mother writes about these things, and her father introduced her to astronomy. Liberty likes to draw star maps and create her own, modern constellations. Her father struggles with depression, and when the parents separate and he moves out, he doesn’t follow through on visitations, and it’s a long time until the girls see him. In the meantime, Liberty finds what she thinks is a meteorite that has crashed in the forest near the family’s home, and finds comfort in discussing her situation with the rock. She has trouble getting along with others, and her former best friend has “excommunicated” her from the 6th grade because Liberty thinks dating and the fake weddings at recess are silly. Liberty thinks that she may have some of the same mental health issues that her father has, and she certainly has a lot of anger. Luckily, her mother does have her seeing a therapist, and the frequency of these appointments increases after Liberty gets angry and throws a toaster. Eventually, the girls get to spend time with their father again, but he has a new girlfriend and doesn’t handle telling the girls very well. Liberty has an issue at school that she has to resolve, and she and her family have to work on finding a way forward with their new reality.” [middle grade, ages 8 and up]

2 thoughts on “All About Meteors with books, videos and more!”