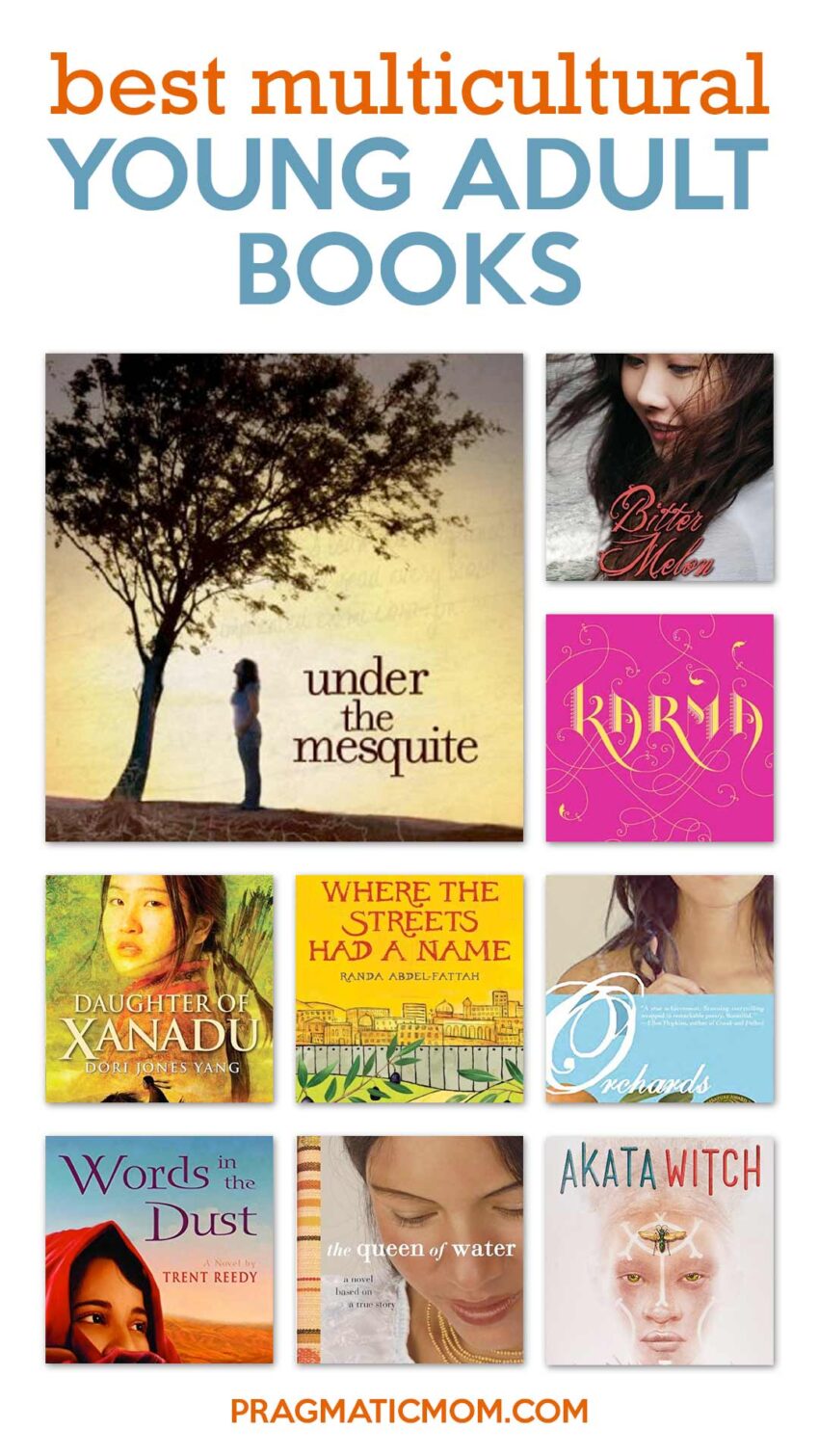 I found this on a great blog that I follow called  PaperTigers that covers multicultural KidLit and literacy around the world. They took YALSA‘s (Young Adult Library Services Association) has just released their 2012 Best Fiction for Young Adults Nominations list and culled out the multi-cultural books. The books nominated have been published within the past 16 months, are recommended for ages 12 – 18, and meet the criteria of both good quality literature and appealing reading for teens.

What is your favorite multi-cultural YA book? Please share!

Twelve-year-old Sunny lives in Nigeria, but she was born American. Her features are African, but she’s albino. She’s a terrific athlete but can’t go out into the sun to play soccer. There seems to be no place where she fits. And then she discovers something amazing – she is a “free agent,” with latent magical power. Soon she’s part of a quartet of magic students, studying the visible and invisible, learning to change reality. But will it be enough to help them when they are asked to catch a career criminal who knows magic too?

“Your papers say American but your blood is Chinese. You inherit my genes. You eat my rice. You will mold to my shape.” In San Francisco, Frances has grown up feeling crushed by the weight of her mother’s expectations that she will go to Berkeley and become a wealthy doctor. Frances doesn’t actively defy her mother until she takes a senior year speech class and discovers the truth in her teacher’s message, “language is power.” A few cultural details point to the 1980s setting, but this debut reads like a searing, contemporary story of timeless parent-child friction across cultural and generational borders. Frances’ mother’s cruelty is shockingly unrelenting and includes some Mommie Dearest moments. Chow adds depth to these scenes by making clear not only Frances’ boiling rage but also her confusion as she balances loyalty, tradition, duty, and independence. Readers will connect with Frances’ fury and yearning as well as her sense of empowerment when she begins to find her voice: “I am not a helpless prisoner anymore. Like a secret agent, I am plotting my escape.” Grades 7-12. –Gillian Engberg from BookList

Athletic and strong-willed, Princess Emmajin’s determined to do what no woman has done before: become a warrior in the army of her grandfather, the Great Khan Khubilai. In the Mongol world, the only way to achieve respect is to show bravery and win glory on the battlefield. The last thing she wants is the distraction of the foreigner Marco Polo, who challenges her beliefs in the gardens of Xanadu. Marco has no skills in the “manly arts” of the Mongols: horse racing, archery, and wrestling. Still, he charms the Khan with his wit and story-telling. Emmajin sees a different Marco as they travel across 13th-century China, hunting ‘dragons’ and fighting elephant-back warriors. Now she faces a different battle as she struggles with her attraction towards Marco and her incredible goal of winning fame as a soldier.

Karma, A Novel in Verse by Cathy Ostlere

Starred Review* After her Hindu mother’s suicide, 15-year-old Maya and her Sikh father travel from Canada to India for a traditional burial. The year is 1984, and on the night of their arrival in New Delhi, Prime Minister Indira Gandhi is assassinated by her Sikh guards. When the city erupts in chaos, both Maya and her father find themselves in great danger. Through a sequence of horrifying events, father and daughter are separated, and Maya is left alone in a violent foreign country where she must rely on the help of strangers to reach safety. In her YA debut, acclaimed adult author Ostlere offers a riveting, historically accurate coming-of-age tale of gutsy survival, self-sacrifice, and love. Set during a six-week period, the novel in verse makes the most of its lyrical form with lines of dialogue that bounce back and forth in columns across the page and singularly beautiful metaphors and similes that convey potent detail and emotion. With artful compassion, Ostlere reveals the infinitely complex clash of cultures within both India and Maya’s family, and although the allusions to karma could have seemed awkward in less talented hands, where they lead into well-framed larger questions that will stay with readers. A fascinating, epic page-turner. Grades 9-12. –Frances Bradburn from BookList

Review, The Winston-Salem Journal, March 20, 2011:
“This lyrical look at bullying and the aftershocks of suicide may be gut-wrenching, but Orchards is crafted with a sensitive beauty.”

Queen of Water by Laura Resau and Maria Virginia Farinango

Starred Review, School Library Journal, June 2011:
“This is a poignant coming-of-age novel that will expose readers to the exploitation of girls around the world whose families grow up in poverty.”

Lupita, a budding actor, and poet in a close-knit Mexican-American immigrant family comes of age as she struggles with adult responsibilities during her mother’s battle with cancer in this young adult novel in verse.

When Lupita learns Mami has cancer, she is terrified by the possibility of losing her mother, the anchor of her close-knit family. Suddenly, being a high school student, starring in a play, and dealing with friends who don’t always understand, become less important than doing whatever she can to save Mami’s life.

While her father cares for Mami at an out-of-town clinic, Lupita takes charge of her seven younger siblings. As Lupita struggles to keep the family afloat, she takes refuge in the shade of a mesquite tree, where she escapes the chaos at home to write. Forced to face her limitations in the midst of overwhelming changes and losses, Lupita rediscovers her voice and finds healing in the power of words.

Told with honest emotion in evocative free verse, Lupita’s journey toward hope is captured in moments that are alternately warm and poignant. Under the Mesquite is an empowering story about testing family bonds and the strength of a young woman navigating pain and hardship with surprising resilience.

“Another day finished, gracias a Dios.”Seventeen-year-old Marisa’s mother has been saying this for as long as Marisa can remember. Her parents came to Houston from Mexico. They work hard, and they expect Marisa to help her familia. An ordinary life—marrying a neighborhood guy, working, having babies—ought to be good enough for her. Marisa hears something else from her calc teacher. She should study harder, ace the AP test, and get into engineering school in Austin. Some days, it all seems possible. On others, she’s not even sure what she wants. When her life at home becomes unbearable, Marisa seeks comfort elsewhere—and suddenly neither her best friend nor boyfriend can get through to her. Caught between the expectations of two different worlds, Marisa isn’t sure what she wants—other than a life where she doesn’t end each day thanking God it’s over. But some things just can’t wait…

Where the Streets Had a Name by Randa Abel-Fattah

Since her Palestinian family lost their home, times have been hard for Hayaat, 13, who lives in Bethlehem on the occupied West Bank. To try to comfort her beloved dying grandmother, Sitti, Hayaat journeys to get some soil from the Jerusalem garden that Sitti longs for. Hayaat’s friend, Samy, joins her on her quest. His mother was killed, and his imprisoned father is a heroic activist to some, but Samy is bitter: “He traded me for the cause.” At the many checkpoints, the friends encounter soldiers, both brutal and kind, and also an Israeli peacenik couple who helps the kids get past the towering barriers. Hayaat’s immediate, wry, and irreverent narrative intensifies the story of anguished struggle and Palestinian politics. The author leaves the story with humor; Sitti farts a lot, for example. The suspense builds, though, to heartbreaking revelations, particularly about the violent episodes that Hayaat has tried hard not to remember. Grades 5-8. –Hazel Rochman from BookList

Words in the Dust by Trent Reedy

Born with a cleft lip, Zulaikha struggles to feel worth in a society that values women by their marriage prospects: “What bride price would Baba get for me? Maybe one Afghani?” Then, by chance, Zulaikha meets Meena, a former professor, who begins to teach her to read and write just as American soldiers arrive, bringing the chance for both more education and surgery to correct Zulaikha’s birth defect. Reedy based his debut on real people and places he encountered while serving with the National Guard in Afghanistan, and the extensive detail about Afghani customs gives the story the feel of a docu-novel while also creating a vivid sense of place and memorable characters. Reedy skillfully avoids tidy resolutions: the grim fate of Zulaikha’s sister, who is married to a much older man, offers a heartbreaking counterpoint to Zulaikha’s exciting new possibilities. A glossary of Dari phrases, an extensive author’s note, suggested-reading lists, and an introduction by Katherine Paterson complete this deeply moving view of a young girl caught between opportunity and tradition in contemporary Afghanistan. Grades 5-8. –Gillian Engberg from BookList

Epilepsy in Children’s and YA Books & 3 Book GIVEAWAY!

Best YA Books for Boys But Why Aren’t There More?

7 thoughts on “Best Multicultural YA Books for Teens”