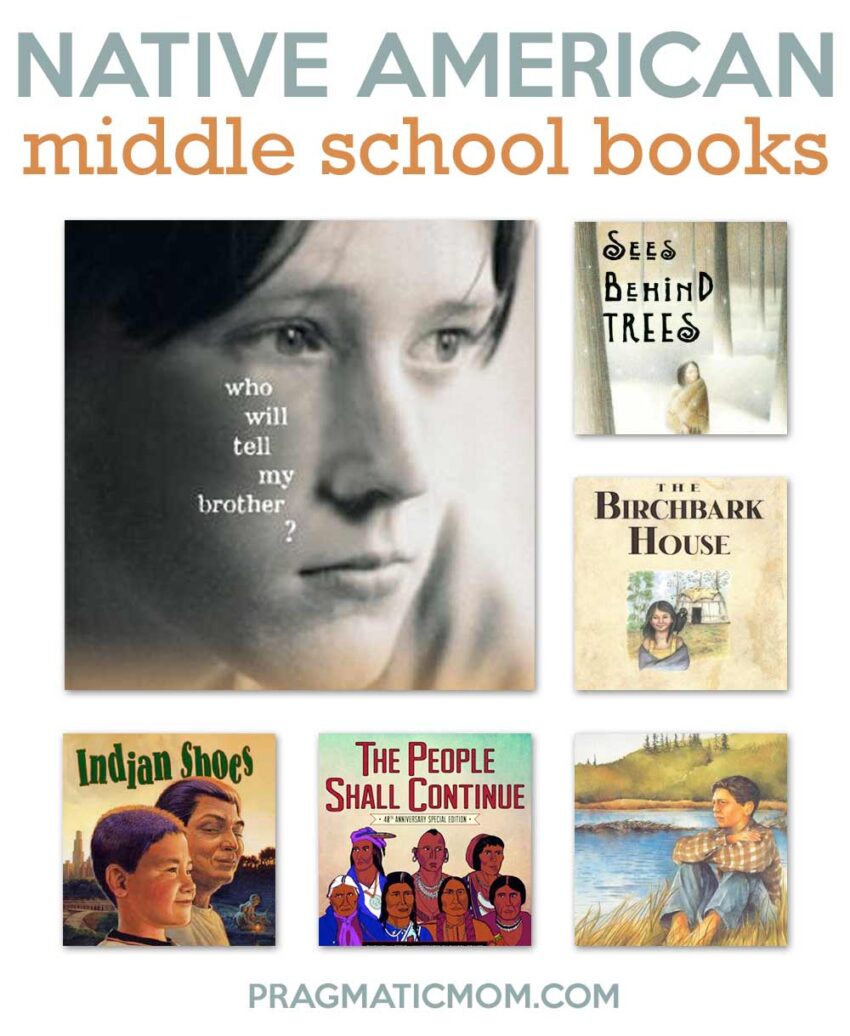 This is part 2 of the 3 part series on Top 10:  Best Native American Children’s Books by Debbie Reese.  She is the authority on this topic.  This list has her top picks for middle school chapter books. For her Top 10 list of Picture Books, please click here.

p.s. I updated this list: Top 10 Best Native American Books for Kids because I had a lot to learn about which books best depict the people of First Nations.

This book  focuses on the greater impact that the generations of Abenaki that followed had to deal with. [middle grade, ages 9 and up]

Who Will Tell My Brother? by Marlene Carvell

Determined to sway high school officials to remove disparaging Indian mascots, Evan assumes a struggle that spirals him onto a soul-searching journey and exposes him to a barrage of bullying, taunts, and escalating violence. Marlene Carvell’s striking first novel is a timely look at a true story of a mixed-race teen caught up in an exploration of his past, his culture, and his identity. [middle grade, ages 10 and up]

Sees Behind Trees by Michael Dorris

A Native American boy with a special gift to “see” beyond his poor eyesight journeys with an old warrior to a land of mystery and beauty. [middle grade, ages 8 and up]

The Birchbark House by Louise Erdrich

“[In this] story of a young Ojibwa girl, Omakayas, living on an island in Lake Superior around 1847, Louise Erdrich is reversing the narrative perspective used in most children’s stories about nineteenth-century Native Americans. Instead of looking out at ‘them’ as dangers or curiosities, Erdrich, drawing on her family’s history, wants to tell about ‘us’, from the inside. The Birchbark House establishes its own ground, in the vicinity of Laura Ingalls Wilder’s ‘Little House’ books.” –The New York Times Book Review [middle grade, ages 8 and up]

As Long as the Rivers Flow by Larry Loyie with Constance Brissenden, illustrated by Heather D. Holmlund

Starting in the 1800s and continuing into the 20th century, First Nations children were forcibly taken to government-sponsored residential schools to erase their traditional languages and cultures. This moving book tells of one such child, author Larry Loyie, and his last summer with his Cree tribe. It is a time of learning and adventure. He cares for an abandoned baby owl, watches his grandmother make winter moccasins, and sees her kill a huge grizzly with one shot. The sensitive text and Heather Holmlund’s expressive illustrations beautifully capture the joy and drama of a First Nations family’s last summer together. [picture book, ages 8 and up]

The People Shall Continue by Simon J. Ortiz, illustrated by Sharol Graves

In broad strokes, this is the story of Indigenous peoples of the United States who continue to prevail despite attempts throughout history to eradicate their language, culture, and way of life. Written more than forty years ago, this story still resonates now more than ever. It’s both a history lesson, an anthem, and a promise. [picture book, ages 6 and up]

What do Indian shoes look like, anyway? Like beautiful beaded moccasins… or hightops with bright orange shoelaces?

Ray Halfmoon prefers hightops, but he gladly trades them for a nice pair of moccasins for his grampa. After all, it’s Grampa Halfmoon who’s always there to help Ray get in and out of scrapes—like the time they teamed up to pet sit for the whole block during a holiday blizzard! [chapter book, ages 6 and up]

Rain Is Not My Indian Name by Cynthia Leitich Smith

It’s been six months since Cassidy Rain Berghoff’s best friend, Galen, died, and up until now she has succeeded in shutting herself off from the world. But when controversy arises around Aunt Georgia’s Indian Camp in their mostly white midwestern community, Rain decides to face the outside world again, with a new job photographing the campers for her town’s newspaper.

Soon, Rain has to decide how involved she wants to become in Indian Camp. Does she want to keep a professional distance from her fellow Native teens? And, though she is still grieving, will she be able to embrace new friends and new beginnings?

It’s been six months since Cassidy Rain Berghoff’s best friend, Galen, died, and up until now she has succeeded in shutting herself off from the world. But when controversy arises around Aunt Georgia’s Indian Camp in their mostly white midwestern community, Rain decides to face the outside world again, with a new job photographing the campers for her town’s newspaper.

Soon, Rain has to decide how involved she wants to become in Indian Camp. Does she want to keep a professional distance from her fellow Native teens? And, though she is still grieving, will she be able to embrace new friends and new beginnings? [middle grade, ages 9 and up]

Caught in a raging storm, Joe High Elk and his sister, Marie, seek shelter in the cave of their ancestor, Steps High Like an Elk, where they learn their family history and discover High Elk’s hundred-year-old forbidden treasure. [picture book, ages 4 and up]

My Name is Seepeetza by Shirley Sterling

Her name was Seepeetza when she was at home with her family. But now that she’s living at the Indian residential school her name is Martha Stone, and everything else about her life has changed as well. Told in the honest voice of a sixth grader, this is the story of a young Native girl forced to live in a world governed by strict nuns, arbitrary rules, and a policy against talking in her own dialect, even with her family. Seepeetza finds bright spots, but most of all she looks forward to summers and holidays at home. [middle grade, ages 10 and up]