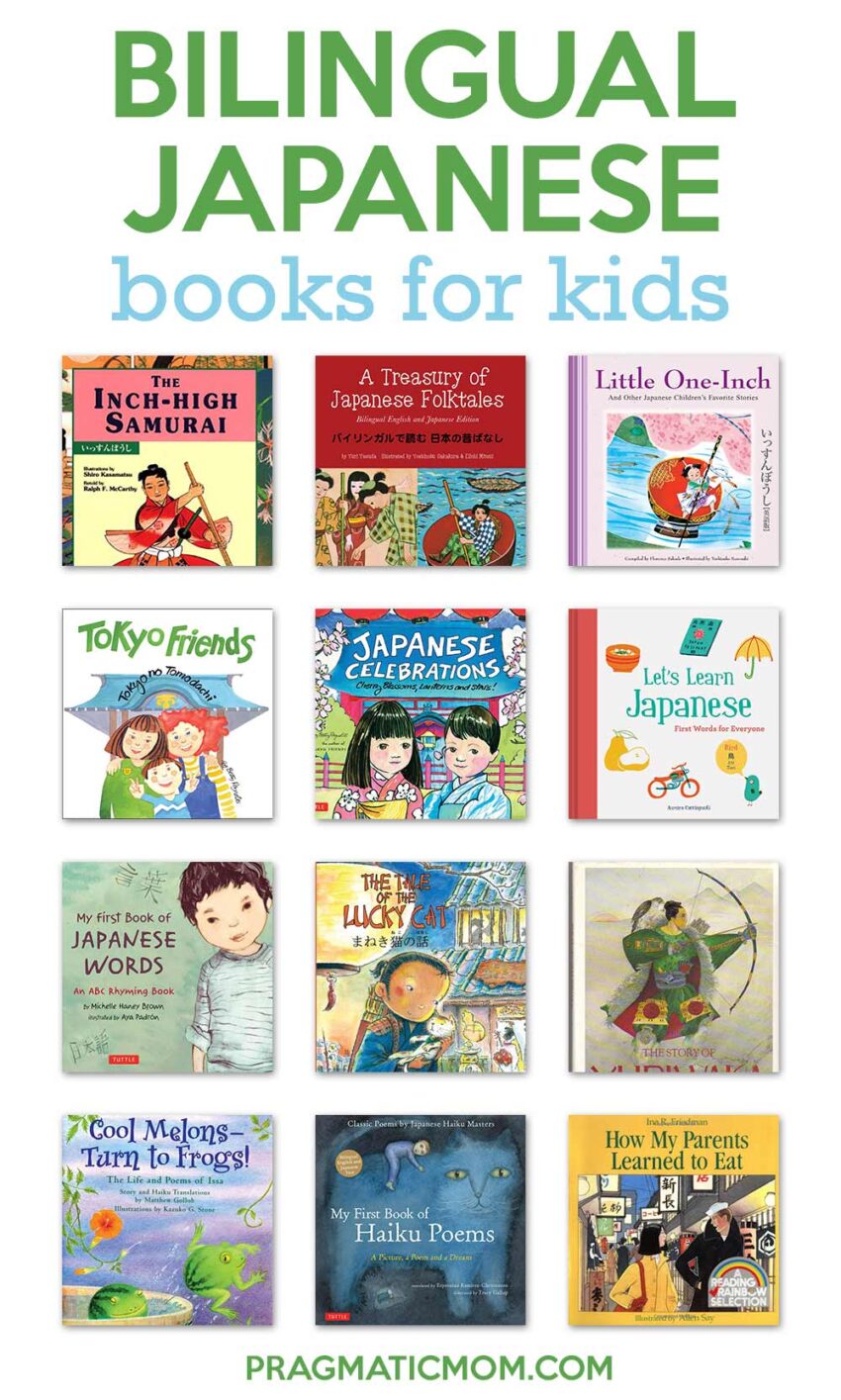 I am always delighted to help find books for kids. A young USAF family being reassigned from Japan sent me an email asking for book recommendations for Japanese themed and Japanese/English, bilingual books.  These are the books I’d recommend to keep the kids exposed to the Japanese language.

Let’s Learn Japanese: First Words for Everyone by Aurora Cacciapuoti

For anyone trying to grow their Japanese language vocabulary, this picture book geared for children will work for all ages. The words are grouped by theme and include English, kanji (which are Chinese characters that Japanese uses), and hiragana and/or katakana (which is like a Japanese alphabet. I like the illustrations of fruit and objects the most because they are more colorful. The illustrations of people are not my favorite nor the page spreads that read more as monochromatic. Still, this is a serviceable picture book to enjoyably learn Japanese nouns. [picture book, ages 4 and up]

This is a lovely picture book in ENGLISH but with Japanese words for each letter both in Hiragana and Kanji. There are also interesting tidbits of information about the Japanese culture that kids would enjoy. [picture book, ages 2 and up]

Here are more picture books with a reference to Japan.

I also have a post on Top 10: Japanese American Books and Teach Me Tuesday: Japan

I happen to have these Japanese Folk Tale books that I found in a Japanese bookstore in Orange County when visiting my mom. They are lovely little books on famous Japanese folk tales and are bi-lingual.

The Tale of the Lucky Cat by Sunny Seki

The waving cat at Japanese restaurants and stores might be familiar but perhaps this Japanese folktale of how the Maneki Neko (The Cat That Invites Good Luck) is new to you. It’s new to me and I’m half Japanese!

Long ago in Japan, a kind but poor toymaker named Tokuzo traveled from village to village to sell his toys. He happened to see a cat running from a dog who ended up in a terrible accident.

Tokuzo took the cat home and nursed it carefully but the cat died. He carefully buried the cat, said his goodbye and went on his way. A storm started, and Tokuzo took shelter under a tree. Suddenly he saw a waving cat that looked exactly like the cat he rescued. Puzzled, he went to the cat. An instant later, lightning struck the very tree he stood under. Was this the very same cat who had died?

He told many people about this mysterious cat and ended up asking a wise old man, a master craftsman for advice. Tokuzo decides to create a statue of the cat to share his good luck. The statue, made of clay, ends up being as a waving cat, very much like the ones you see today!

This story reminds us that all acts of kindness matter.

Bilingual Japanese folktale in Japanese and English! [Picture book, for ages 4 and up.]

These books are great and have Japanese vocabulary words throughout both books as well as cover the holidays and traditions of the Japanese people. I learned a lot from them!

The Story of Yuriwaka: A Japanese Odyssey is a short chapter book that would be good for older kids.

This picture book is a translation of Haiku poems by Issa, a Japanese poet born in 1763 on a farm in central Japan. He began writing haiku as a young child.

My First Book of Haiku Poems: A Picture, A Poem and a dream translated by Esperanza Ramirez-Christensen, illustrated by Tracy Gallup

Classic poems by Japanese haiku masters are presented in both English and Japanese. The commentary below including discussion questions for each poem helps to connect the poem with the illustration to deepen the meaning of the spare and beautiful words. This is a great resource to introduce haiku to kids in the classroom or at home! [picture book, ages 5 and up]

Here are a few more children’s books for learning Japanese:

How My Parents Learned to Eat by Ina R. Friedman, illustrated (gorgeously!) by Allen Say

Thank you to Rachel for this great recommendation! I have heard so much about this book but I don’t think I’ve read it yet! [picture book, ages 6-9]