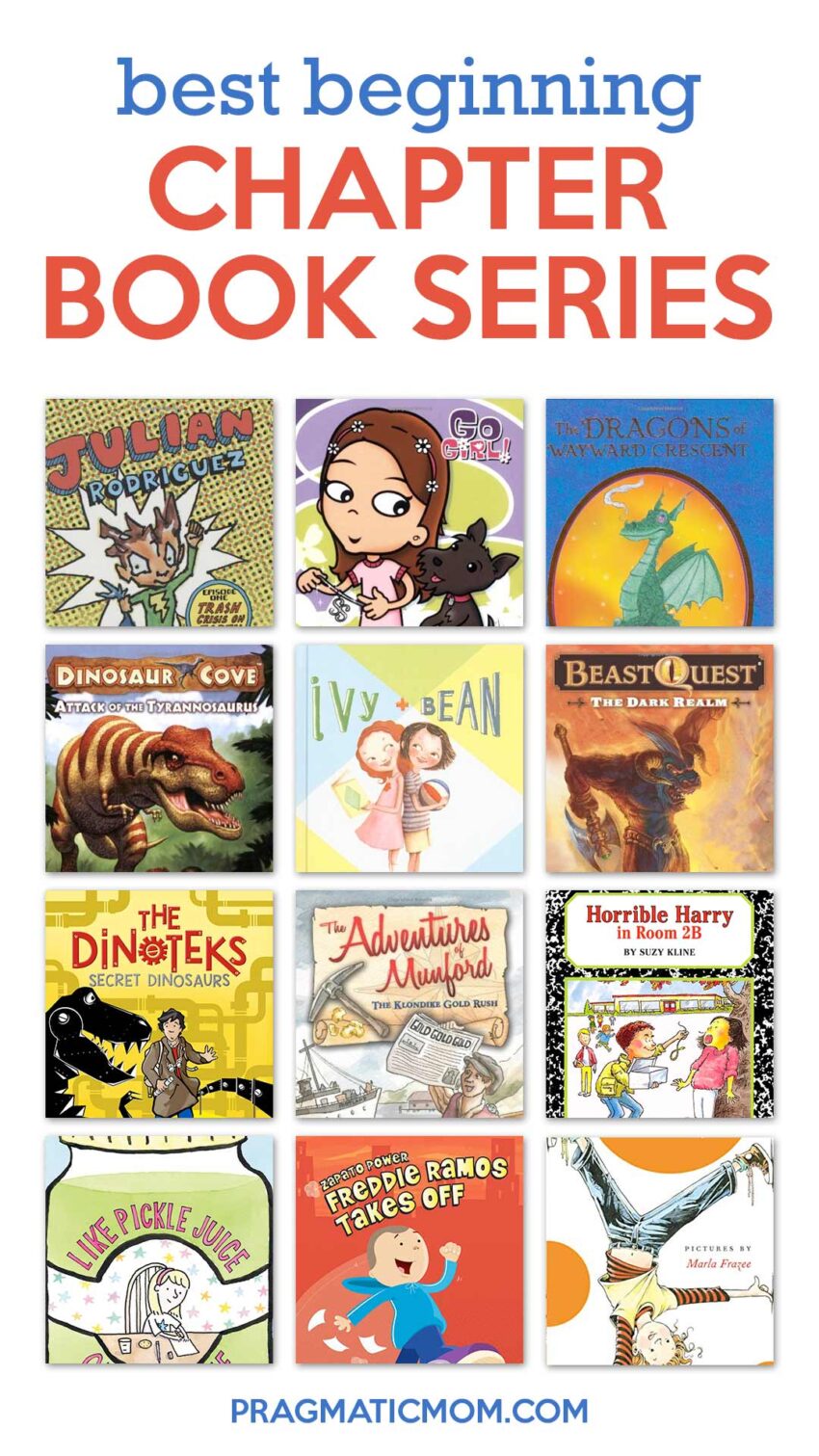 Dragons and aliens and dinosaurs, oh my!  And for girls, there are interesting, mischievous girls to meet, as well as cousins who are really sweet. This is a category of early chapter books, beginning chapter book — more advanced than Henry and Mudge but not ready for Newbery Award winners — that is sorely lacking in quality series.  I sought out a bunch of new early chapter book series to find more options and I’m happy to say that there are some new good ones!  I also “test drove” out my recommendations on my own kids and their play dates … and the verdict was positive. Ivy and Bean was a hit – twice over.  Cobble Street Cousins were a hit in my 2nd grader’s entire class, and Clementine, though slightly more advanced is well worth the effort.  Read on for the rest!

This is a diabolically clever series to get your reluctant reader to read.  Because the premise is that Julian Rodriguez is an alien plant pretending to be a young boy in an earth family, it has really wonderfully rich language as Julian communicates the bizarre goings on to his superior in outer space.  There is a cartoon/comic book quality that is really appealing to boys but moms will love the vocabulary:  breached, unhygienic, contaminated, barbaric, sequestered, vulnerable, gluttony, sanitation, subterranean containment facility (basement), orb (ball), and rest inducer (sleeping bag).  Fun, huh?!  And also funny!

My mom friend with 3 girls (and an ex-third-grade teacher) told me about this series.  I got a bunch for my middle daughter and she loves them.  It’s a series that focuses on social situations that girls particularly find themselves in:  fitting in, keeping secrets, can’t do a cart-wheel, etc.

8. The Dragons of Wayward Crescent series by Chris D’Lacey

This is a series that would appeal to both boys and girls.  The font of the books is especially large which is good for reluctant readers.  The mother is a sculptor and some of the dragons she creates come to life.  Her daughter Lucy is in on the gig and the dragons help to fix all kinds of crazy situations.  There are also half-page-sized illustrations every three or four pages that break up the text.

At the Dinosaur Museum, there is a secret dinosaur cove full of real dinosaurs and only Tom and Jamie know about it.  There are illustrations on almost every page and some illustrations are a full-page spread.  This is a great series that is exciting but not too scary and the dinosaur facts (based on my two-year crash course with my youngest) seem to be correct.  Think Jurassic Park but not nail-biting.  This is especially appealing to boys or girls who love dinosaurs.

I really like this series and I recommended it to my middle daughter’s friend to get her to diversify from Nate the Great.  She liked it! Ivy and Bean are great friends and get into slightly sticky situations that are not always totally their fault.  Honest!  If your child had Ivy and Bean as classmates, you’d invite them over for a playdate!

A great fantasy series that is both exciting and not too difficult.  Think Aragon but 60 pages or less with a large font.  This is an appealing series for boys who like fantasy and adventure.

I love Cynthia Rylant.  She’s one of my favorite authors.  I had a chat with a librarian and we both raved about her range: picture books, chapter books, easy readers!  This six-book series is not that well-known but it’s so sweet.  It’s about three cousins who spend summers with their Aunt Lucy while their parents travel with the ballet.  It’s like a Victorian series but set in more contemporary times.  Could Not Be Any Sweeter!  My kids and I love this series!!!

Your kids might read this series at school but if they haven’t, you are in for a treat.  Adventures of a boy, Elmer, and the dragon he rescues.  This is an especially well-written series.

2. How to Train Your Dragon by Cressida Cowell

It’s a book.  It’s a movie.  The movie is different from the book but both are equally excellent.  This is the dragon equivalent of Diary of a Wimpy Kid in that everyone, boys and girls,  loves this book series and it’s really, really funny!

Think Ramona but not quite as difficult to read.  Clementine is not quite as young as Ramona but just as fun to get to know.  This is a wonderful series that has won all kinds of awards.  We are waiting impatiently for the newest book in the series (Clementine: Friend of the Week) that comes out very, very soon! Clementine: Friend of the Week is hot off the presses on July 27, 2010!

My son spent a preschool year obsessed with dinosaurs and we read nothing by dinosaur books for an entire year. His interests eventually switched to Pokémon, but he’s always been fond of dinosaurs. This series is perfect for him for first grade when he started to read independently. Mechanical dinosaurs come to life in this easy chapter book action-adventure series! [early chapter book, ages 6 and up]

The Adventures of Munford series by Jamie Aramini

I am really excited to discover this early chapter book series about Munford, a water drop, that combines history with science is — actually — a riveting easy chapter book series. When I read the premise, the main character is a drop of water, that floats around the world (and back in time), I was dubious. I read Munford Meets Robert Fulton and loved how this story combines 1) the story of young Robert Fulton and his story of perseverance 2) Munford as part of the cumulus/cumulonimbus cloud systems (5th grade science!) 3) colonial America (more 5th grade social science!) including Ben Franklin, Napoleon, and Robert Livingston. This series makes history and science come alive, all seen through Munford, a drop of water that can transform, naturally into rain, snow, sleet, or steam. In this book, Munford becomes part of snot, gunpowder, part of a cloud, rain, poop, and more.

Teacher-turned-author Suzy Kline uses her years in the classroom as the basis for her Horrible Harry series. Song Lee is an actual student that she adored. Other characters including Horrible Harry (who isn’t that bad of a kid) are compilations of kids she taught. As an author who visits schools, Suzy talks about story seeds, a word or a two that she jots down in an ever-present notebook that become the basis of her books. Pencil stub, yellow scarf, purple hanger, June Box are all actual story seeds that became books in her popular Horrible Harry series which is now published in several languages. See if you can discover each of her story seeds as you read her books.

This is not a series (yet, I hope) but it IS a short chapter book that is illustrated in a fun New Yorker cartoon-y kind of way. The story is very sweet — Eleanor who is going into third grade is missing her nanny-who-raised-her-since-she-was-a-baby because she had to move to another state to take care of her father. Though this nanny can never be replaced, the new babysitter understands that she will never be Bibi but she will be the best Natalie-the-babysitter-after-Bibi that she can be. The text on the page is broken up into very short lines to resemble poetry so it is especially easy to read and there are lots and lots of charming illustrations.

Freddie Ramos gets a mysterious present — a pair of winged sneakers that allow him to run lightning-fast. He’s not sure who gave them to him but it’s a blessing since it is one less thing his mother needs to pay for. Ever since his father died while serving for his country, his mother has struggled to make ends meet. She ended up taking classes to get a new position as a medical secretary so things are much better now. With Zapato power, anything is possible and Freddie is up to the task whether it’s a rescue or a good deed. This is a wonderful short chapter book series that packs a powerful message while still being a fun read.

Thank you to reader Angie for her two picks. Both are very popular series that boys AND girls enjoy … and it’s almost a rite of passage requirement to read them!