Who Are The Lost Boys of Sudan?

“The Lost Boys of Sudan are more than 27,000 boys of the Nuer and Dinka ethnic groups who were displaced and/or orphaned during the Second Sudanese Civil War (1983–2005, about 2 million killed). The survivors, about 3800 Lost Boys arrived in the United States in 2001, where they are now scattered in about 38 cities.

Most of the boys were orphaned or separated from their families when government troops systematically attacked villages in southern Sudan killing many of the inhabitants, most of whom were civilians. The younger boys survived in large numbers because they were away tending herds or were able to escape into the nearby jungles. Orphaned and with no support, they would make epic journeys lasting years across the borders to international relief camps in Ethiopia and Kenya evading thirst, starvation, wild animals, insects, disease, and one of the most bloody wars of the 20th century. Experts say they are the most badly war-traumatized children ever examined.” from Wikipedia

My 5th grade daughter’s girls book club got invited to the 5th grade boys’ book club because they had a special guest, William Maliul, an articulate and engaging Lost Boy of Sudan, who came to speak about his experiences in Sudan, Ethiopia, Kenya, and the United States. Brothers in Hope was the book club selection and though it is a picture book, the content is suitable for a 4th or 5th grader but not really younger grades.

Both of these books depict William’s story. He pointed out minor discrepancies and elaborated on points made in the books. When he crossed the Gilo River because the Ethiopian army was shooting at them, the crocodiles were scared away by the crush of people jumping into the river. Those from the mountainous regions of Sudan didn’t know how to swim and drowned. The cow herders like himself were all taught to swim at age 5 by a rite of passage the boys all went through which was to be thrown into the river to sink or swim. He said that it was important to swim as the cows had to cross the river and that you took a calf and led it across the river and all the cows would follow in a line. It sounded amazing and like it was still somewhat surprising to him too! At the refugee camps, the books mentioned that there was not enough food. William was specific: there was only enough food to eat one day out of six. So, he’d got to school all day and come home to no food, and do the same for five days until the next ration of food came.

When William told his story to us, we were all moved and sort of stunned that a boy of seven could withstand so much and yet be so upbeat, positive, and even lighthearted. The kids all wrote questions that were put into a paper bag and after his presentation, he drew them out one at a time to answer him.  The questions about cows made him laugh. Especially when there were three questions in the bag about cows. He always has a ready smile and is quick to laugh. Despite all he’s been through, his humanity is intact. Thanks to the mother who hosted this book club, he’s attending college through a scholarship studying biotechnology but he also works full time at a hotel and sends money back monthly to support relatives back in Sudan. Talk about a role model for kids!

I asked the girls from my daughter’s book club what they thought about the book club.  They were quiet for a moment as they were during the entire presentation just taking it all in.  “It was really good,” they finally said. I don’t know if this will be a pivotal moment in time for any of them — you never really know when a single person will change your life — but I would not be surprised if this visit emanates in all of us for years to come.

Children’s Books on the Lost Boys of Sudan

Brothers in Hope: The Story of the Lost Boys of Sudan by Mary Williams, illustrated by R. Gregory Christie

A Long Walk to Water by Linda Sue Park

The Lost Boys and Girls of Sudan’s Epic Journey

This map shows the epic journey the Lost Boys and Girls of Sudan made.  Sometimes you need a visual to really understand! 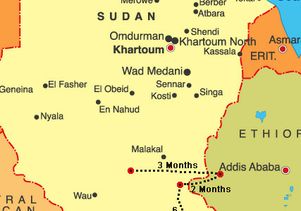 The mom who hosted the book club sent around this link about the Recent Election in Sudan.  We all pray that it goes well and brings stability to Sudan.

Some Great Websites to Learn More About Lost Boys of Sudan

Lost Boys of Sudan, Chicago
Lesson Plan: GOD GREW TIRED OF US: MIGRATION AND CULTURAL INTERACTION
The Full Wiki: The Lost Boys of Sudan
He was a Lost Boy of Sudan. Now he’s helping others access healthcare and live their best lives.