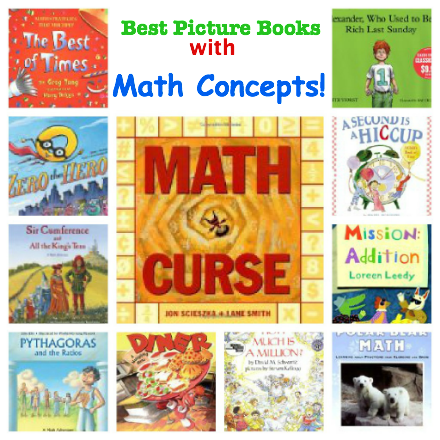 My oldest child is a visual learner so combining picture books with math concepts was a great way for her to get an intuitive feel for math. Here’s some books we’ve enjoyed for both the math and the picture book.

Here are two more math books that use drawing to teach math, a fun concept!

Infinity and Me by Kate Hosford, illustrated by Gabi Swiatkowska

The concept of infinity is hard to wrap your head around, especially for kids. 8-year-old Uma asks her friends about infinity. Charlie tells her it’s a number that keeps growing forever. Samantha teaches her the infinity symbol, a sideways 8, like a racetrack you can drive on forever. Grandma thinks of infinity as a family tree that goes back forever. Mr. Mancini, the cook at school, tells her to imagine chopping a noodle into tiny pieces…forever. Ms. Reed, the music teacher, thought of music that plays in a circle. As Uma contemplates this all, she realizes love is like infinity and that makes her feel less small as she looks at the stars in the sky. [picture book, ages 6 and up]

Zero the Hero by Joan Holub

This is one of new favorite math picture books because it has a REAL story embedded with math concepts. Zero, our protagonist, gets left out of games and he’s not well-regarded by the other numbers. He doesn’t seem to matter much for addition and subtraction and he’s no use at all in division. As for multiplication, the other numbers fear him as he can zap them into nothingness. (There’s a bullying/inclusion story built-in here too!).

Shunned and feared, Zero takes off. That’s when the other numbers realize his usefulness. They can’t go higher than 9 without him! When the bullies come, the Roman Numerals, Zero shows his superhero stuff!

The math concepts are cleverly integrated into a really great story! We’ve read this book at least 10 times so far!

Pythagorus and the Ratios by Julie Ellis, illustrated by Phyllis Horning Peacock

I always heard that music and math were related but never really delved into it. Young Pythagorus explains how ratios determine what sounds are pleasant to listen to. These advanced picture books have a historical fiction element to them; Pythagorus really did hang rocks from strings to tune them. These books are similar to the Sir Cumference series in that they will appeal to kids who like relating math concepts to the world around them. I wish both series had more appealing illustrations but that didn’t seem to bother my son who loves these types of math-y picture books.

A reader told me about this series and I bought about six of them to try out on my seven-year-old son. Each book is centered around a math concept — many around geometry  — and include a mystery to solve. My son loved the mystery aspect as well learning the math idea. Another clever twist is the names of the characters. There’s Lady Di Ameter and Sir Cumference. They have a boy named Radius. I think that is also fun while helping to reinforce math vocabulary.

This series is best in a classroom or from a library as I find we are not reading each book more than once or twice. I think it’s the mystery aspect; once you solve it, the book is done. I do recommend reading this series as it builds an intuitive sense of geometry that will be utilized at a later grade.

The Best of Times by Greg Tang

I was waiting at my Dermatologist’s office when I spotted and quickly read this book. I really like the both the visual depiction of multiplication as adding (and adding and adding some more) as well as the fact that the book rhymes. This is how it teaches times 8 or x 8:

“Eight is very much like Four/Simply double but once more/ Since 2 times 2 times 2 is 8/Doubling three times works just great.

This is exactly the strategy that my 3rd grader’s teacher talked about for conceptualizing what times 8 means.

I think this book would be perfect for ages 5-7. It’s possible that a preschooler would like this book but that child would need to have great fine motor skills and be really interested in learning how to draw step by step. The concepts that are covered include: counting, odd and even numbers, grouping/ie count by 2’s or 3’s, intuitive subtraction, and patterns. In fact, it’s this idea of finding patterns by drawing in a methodical way that marries math so nicely with art. My six-year-old son would love this. He learned to draw the pigeon of Mo Willems fame by drawing it shape by shape and it now hangs proudly in my office. [drawing hands on art activity book with math concepts, ages 5-7]

Inches and Miles: The Journey to Success by Steve Jamison

This was prominently displayed in my first grader’s classroom this year at Curriculum night and I also remembered seeing it last year in my then 3rd grader’s classroom. I flipped through it but I need to buy a copy myself! It gives a good sense of measuring.

Inch and Miles have one last assignment before summer vacation begins. Their wise teacher, Mr. Wooden, has asked them the meaning of success. Using a magic silver whistle, Inch and Miles set out on a journey to discover the blocks of the Pyramid of Success and learn how to try 100 percent to be their personal best. [It’s listed for ages 9-12 but I think it’s also fine for first grade and up]

You Can Count On Monsters by Richard Evan Schwartz

Capability:Mom sent me this and it was on NPR. What is so neat about this book is that the math is embedded into the drawings of monsters. Concepts like prime numbers, fractions and factoring and the idea here is to use these fun colorful monster drawings to find patterns — the basis for mathematics. [picture book, ages 4-8] 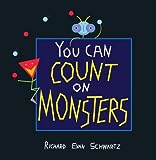 Alexander, Who Used to be Rich Last Sunday by Judith Viorst and Ray Cruz. A funny story about a boy whose allowance burns a hole in his pocket. Currency and subtraction are imbedded into the story. [ages 4-9]

Math Curse by Jon Scieszka.  Imagine waking up and finding out that everything in life is a math problem?!   Hilarious and full of fun everyday math problems.  The next day turns out to be fine, until … science class! [ages 5-9] A Second is a Hiccup by Hazel Hutchins.  It’s another great title for teaching time.  Thank you to BookMaven for this suggestion!

What could Caesar’s general have in common with multiplication and weights? Or a Russian waiter with factorials? Or a temple in Hanoi with transposition? A Chinese emperor with Benjamin Franklin and Albrecht Duerer?

This book is a collection of stories from different countries. Each story sets the brain ticking, encouraging problem-solving skills, with a high quotient of fun! And each is followed by a simple explanation of the maths behind the ‘magic’, that dispels the esoteric haze from the subject and makes it accessible.
A fascinating collection about mathematics and the world, from a country that has been prominent on the number map from ancient times.  [picture book, ages 10 and older] Chicka, Chicka 123 by Bill Martin Jr., Michael Sampson and Lois Ehlert. Sequel to Chicka Chicka ABC, this book is perfect for a child learning to count to 100. W use the front and back inside covers to count to 100, count by 10’s, and count by 5’s. It’s also fun to point out patterns because the numbers are wonderfully color-coded as in, hey look how all the numbers in this column end in the number 2! [ages 2-7]

Telling the Time by Heather Amery. My five-year-old loves to move the hands of the clock. It has taught him analog time by the hour and it also has one page to the half hour. [ages 3-6]

Clocks and More Clocks by Pat Hutchins. This is a good book to see if your child understands how to apply telling time to a real life situation. There are different analog times displayed throughout the book in different ways from on the hour, to the half hour, etc. You can just read the book and enjoy the story, but you can also use this book to practice telling the time. [ages 4-8]

Ninety-Three in My Family by Erica S. Perl. A really run rhyming book that is also a great storybook. You can sneak math in by counting the 93 members of the family using the handy chart in the back. Her website has other games and activities incorporating math with her book. [ages 3-7]

Chimp Math: Learning About Time from a Baby Chimpanzee by Ann Whitehead Nagda.

Minnie’s Diner: A Multiplying Menu by Dayle Ann Dodds and John Manders. The story is so fun that your child doesn’t even realize that s/he is being exposed to the concept of multiplication. [ages 4-8]

The Grapes of Math by Greg Tang. Mind-stretching math riddles for kids that can visualize math in their heads. Perfect for kids learning multiplication and skip counting. [ages 5-9]

The Monster Money Book by Loreen Leedy. Perfect for budding entrepreneurs as well as kids learning how to handle their allowance. [ages 4-9]

Mission Addition by Loreen Leedy. A visual presentation of addition, perfect for little ones. [ages 3-7]

Fraction Action by Loreen Leedy. Fractions are presented in a visual and easy-to-understand way. [ages 5-8]

Tiger Math: Learning to Graph from a Baby Tiger by Ann Whitehead Nagda.

How Much is a Million? by David M. Schwartz and Steven Kellogg. It can be hard to describe large numbers to little ones and this book does a great job teaching the concept of a million. [ages 4-7]

A Grain of Rice by Helena Clare Pittman. A novel about how a humble farmer is rewarded with a single grain of rice which is doubled every day for 100 days. A great way to learn about exponential growth…and then talk about this can apply things like saving money! [ages 7-10] To examine any book more closely at Amazon, please click on image of book. As an Amazon Associate, I earn from qualifying purchases.