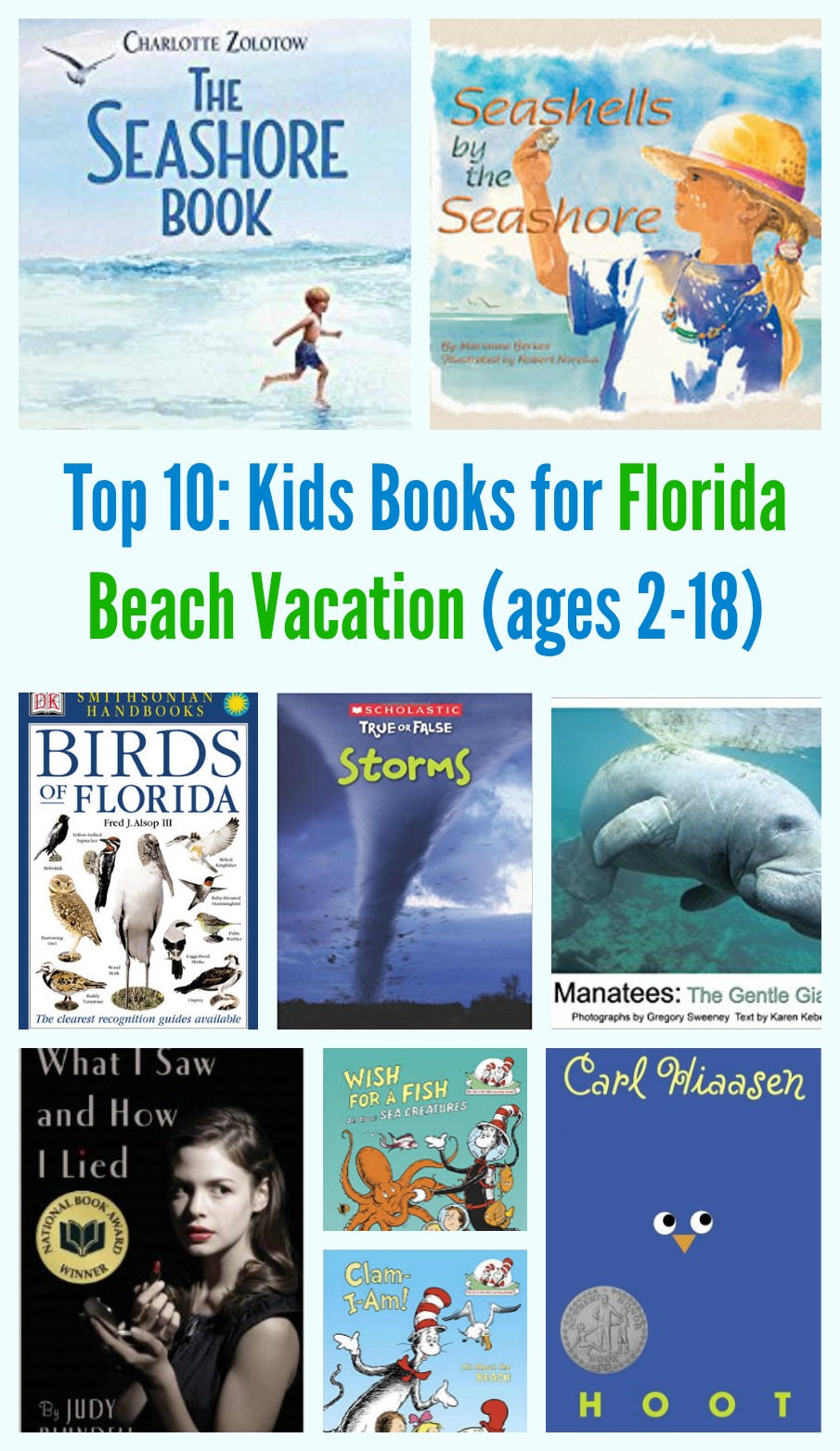 Books for Kids for Beach Vacation

We have spent an amazing week at North Captiva Island, a barrier reef island with only golf carts as transportation.  Every day, an amazing array of birds fly by the house and dive in the water to catch fish.  We saw an Osprey land on our  roof with a flopping fish.  It eyed us for a moment before flying off to eat its prey.  Every day we see fleets of Brown Pelicans fly in military precision over the water.  When my husband released a catfish he caught on shore, as Osprey flew out of nowhere and grabbed the fish as it swam wearily away.

The shelling is so abundant with large “puddles” of shells that my oldest now carefully selects only for coral, extremely large or iridescent shells.  Our shell collection has accumulated to quite a pile!  The Seashells by the Seashore have helped us to ID some of the shells but the abundance exceeds the 10 shells featured in the book.

Yesterday we went out with Captain Dennis for a fishing trip where there were over 36 bites of Ladyfish, Spanish Mackerel and Bluefish.  Everyone caught a fish for dinner and rest of the catch was released to…wild dolphins that swam alongside the boat for a stretch.  We saw a glorious pod of about 30 including baby dolphins who swam near their mothers and a big dolphin with a chewed up dorsal fin (sharks?!).

I missed the manatees at the dock yesterday.  The manatees are only just returning to Florida now as the waters have been unseasonably cool.  My kids got some great photos of these gentle giants.  It left such an impression that my oldest implored the boat captain to go slowly around the docks.  But everyday, there is my “favorite” bird that hangs outside the house in a little patch of wilderness.  I thought it was a Snowy Egret, but the beak is orange and the neck is really long and it has these wispy feathers that resemble those on a feather boa.  I searched the Birds of Florida handbook and now I think it a juvenile Heron but I could be wrong.

In short, we highly recommend North Captiva island as a family vacation.  Rent a house or condo on the beach.  There are slight complications as island vacations do tend to have such as getting there by water taxi and correctly estimating  a week’s worth of groceries but it is well worth it.  And if you do, take some of these books with you!

The Seashore Book by Charlotte Zolotow, illustrated by Wendell Minor

Use this picture book to visualize the ocean or just to recall a wonderful day spent at the beach. A mother describes a day at the beach to her little boy who has never seen it. From morning until nightfall, she vividly tells him about clamshells that snap open in his hand, finding feathers on the beach, the wildlife found in tide pools and along the beach, and the sounds and smells of the ocean. This makes a lovely bedtime story after a day at the seashore! [picture book, ages 2 and up]

Newly independent readers, particularly those who like doing puzzles and games, will like the Usbourne Puzzle Series. This particular book is themed around exploring the sea in the guise of searching for sunken treasure. With a bathyscope with unusual powers, three siblings and a scientist set off for adventures under the sea. There are puzzles to solve on each page spread, from mazes to search-and-finds, and there is lots of learning along the way (my favorite part!). I learned about Port Royal, a REAL Atlantis, that is to say, a city that became submerged after an earthquake. Other topics including adaptations of the cuttlefish for evading predators, animal life in The Abyss, and the techniques underwater archaeologists use to explore. It’s one of those books that gently teaches while delighting! Perfect for reluctant readers too!

10. Seashells by the Seashore by Marianne Berkes

A counting book depicting 10 well known shells, this is a beautifully illustrated rhyming picture book of a little girl collecting seashells at the beach.  The illustrations of the sea shells are great for identifying the sea shells your kids find!  [ages 2-10]

A Dorling Kindersley (DK) Eyewitness Non-Fiction book.  This great non-fiction series is chock full of illustrations and information and would be a great browsing book for curious minds.  [ages 6-12]

8.  True or False:  Storms by Melvin and Gilda Berger

A simple non-fiction book on storms perfect for young or reluctant readers.  The question and answer format helps to draw in readers of every age from older siblings that want to show off to younger readers who like to guess.  [ages 4-10]

This National Book Award winner for Young Adult fiction is set in Palm Beach, Florida at the end of WWII.  Fifteen-year-old Evie is caught in layers of lies and secrets centered around stolen Jewish treasure  and a handsome ex-GI in this coming of age riveting who-dunnit novel.  [ages 14-adult]

A must have color-illustrated handbook  for identifying the array of birds parading by your door.  [ages 8-adult]

5. Miles and Miles of Reptiles. All About Reptiles by Tish Rabe (A Cat int he Hat Book)

4. Wish for a Fish: All About Sea Creatures by Bonnie Worth (A Cat In the Hat Book)
All about sea creatures including manatees, sharks and fish in the different depths of the ocean: sunny zone, twilight zone, dark zone, abyss and the trench. [ages 2-6]

3. Clam-I-Am! All About the Beach by Tish Rabe. (A Cat in the Hat Book)
This book is truly all about  the beach including tidal pools, the water cycle of oceans, sea creatures on the shore, tides, and waves. [ages 2-6]

Gorgeous photos of manatees in central Florida’s freshwater springs combined with sparse but informative text about the gentle and endangered manatees. Set in Coconut Cove, Florida, this Newbery Honor Book manages to combine middle school social angst, bullying, environmental issues, and a mysterious boy who can catch a mullet with his bare hands in this riveting must-read novel!  [ages 8-12]