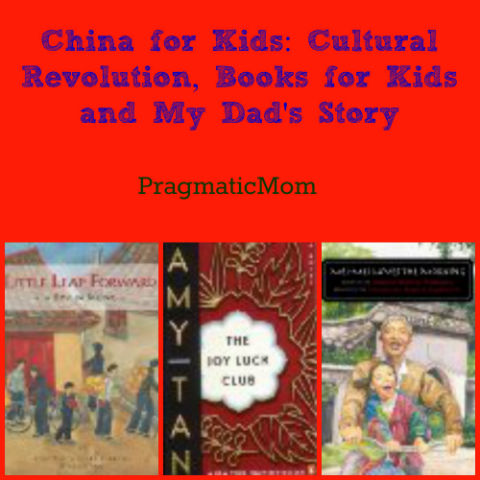 China for Kids: Cultural Revolution, Books for Kids and More

I thought I’d finish up my family history and then I promise to move on from Asia for a while! I covered my mother’s Japanese aristocratic Daimyo history here, and my husband’s royal Yi Dynasty ancestry here.

My father immigrated from China before the Communist Revolution and like most Mainland China ex-pats, he has his own Joy Luck Club tale to tell. But first, isn’t it funny/strange that most everyone seems to be related to a royal or an aristocrat if you just go far enough back in time? Is this because that is the history that people take pains to preserve? Or maybe these family trees are immense?

In any case, my father’s Chinese side of the family is not related to royals (though with so much history and shake-ups, you’d think almost everyone in China had a shot at that) or aristocrats; his family was silk merchants. I don’t exactly have all the details but I would imagine that his family did soup to nuts — raising silkworms, spinning thread, weaving fabric, and then selling it. I would also guess that they were prosperous but not moguls in that I know that his relatives suffered greatly during the Cultural Revolution.

In China, most opportunities for advancement are based on standardized tests, particularly in education. My father did well and went to the top university in China and then he went on to teach math at a university. He was later sponsored by the Chinese government to study in the United States, and he went to U.C.L.A. to get his PhD in math. Rumor has it that he fudged his age a tad to appear younger in order to qualify.

The Communist Revolution happened and he was told to return to China. He decided to disobey and stayed. He met and married my mother and taught math at several universities before settling down in Southern California at the newly established California State University, Long Beach. There was a small detail that I grew up not knowing. In order to study abroad, only married family men were selected so that they had an incentive to return. My father had a wife and two girls back in China and his wife was also a math professor. Apparently, this was not a marriage made in heaven though I do not think that it was an arranged marriage.

After the Communists took over, all communication between the U.S. and China ceased until Reagan opened China again in the 1970s. My father made two trips to China; one right after China reopened by himself, and a decade or so later with us, his family. It was on this second trip that we were abruptly greeted at a hotel by his two girls who grew up, unusually in China, without a father. It seemed to me that this fatherless childhood was more traumatic to them than the Cultural Revolution. Years later I was surprised again to meet the children of my half-sisters in the United States. They had researched online to locate us and were now studying for their PhDs in the United States. It really is a small world, isn’t it?!

So, to tie this in with my Teach Me Tuesday feature, I thought I would cover KidLit, Communist China era memorabilia, Zen interiors with Buddha heads. I picked Zen interiors only because I really like a good Buddha head; religion during Communist China did not really exist. Do you have or know of a Joy Luck Club story? Please share! It doesn’t have to be from China!

To cover the Culture Revolution, I selected Little Leap Forward, a chapter book about living during this time in China. Zen Shorts still remains one of my all time favorite picture books because is manages to combine Chinese Philosopher Chuang Tsu’s parables in a way that is accessible to kids and yet leave adult readers pondering Big Ideas. Finally, for everyone who has a Joy Luck Club story from their homeland, I hope that you all have had a chance to read this book that broke the ground for a new Asian American literature genre twenty-five years ago.

Experience life in China with Mei-Mei and her grandfather as they eat, bike, and exercise through the streets of an urban city in China. [picture book, ages 4 and up]

The Cultural Revolution comes to life through the eyes of a young boy in this gentle easy chapter book about a difficult period in Communist China [easy chapter book, ages 8 and up]

This was the book that started the new Asian American literature genre and revealed that it was not just my family that had a secret past. [young adult/adult fiction, ages 12 and up]

I am partial to Buddha heads in interiors … From A Creative Interior

Most of the Buddha heads I have purchased have come from flea markets, but here is a good selection I found on Amazon. I didn’t list the prices since these seem to change, but most are well under $100. Click on the Buddha head to see more info including price.  I use mine for book ends. 12 thoughts on “China for Kids with Children’s Books, Culture and Design”