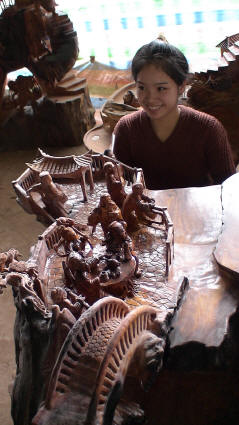 I received an offer via email to review this book and I was eager to cover Laos for my Teach Me Tuesday feature (which I am now doing every other week in an attempt to keep my posts to 3x a week and thus preserve my sanity since I am also launching a second blog, JadeLuckClub: Celebrating Asian American Creativity! which requires 3x a week posts as well). I asked her if she knew of any chapter book set in Laos or covering Laos or the Vietnam War. She didn’t know of any. I searched online but came up dry. Maybe you know of a middle grade chapter book set in Laos? Can you please leave me a comment with your suggestions? Thank you.

I’ve never been to Laos but the bombing during the Vietnam War saddens me:

“As part of its efforts during the Vietnam War, the United States began a nine-year bombing campaign in Laos in 1964 that ultimately dropped 260 million cluster bombs on the country — the most heavily bombed country in history. That’s more than 2.5 million tons of munitions — more than what the U.S. dropped in World War II on Germany and Japan combined.

When the bombs hit the ground, many of them did not blow up as designed but instead remained hidden — waiting for an unsuspecting farmer or student. Of the 75 million bombs that failed to detonate, less than 1 percent has been cleared. At least 25,000 people have been killed or injured by these bombs in the 35 years following the end of the bombing campaign. Today, an average of 300 Lao people are injured or killed every year by these weapons.

The economy has become a casualty, too. Laos’s economy is almost entirely agricultural (rice, in particular) yet one-third of the land remains littered with unexploded ordnance. Clearance costs and security concerns continue to pose a barrier to farmers large and small, leaving fertile soil untilled.”

All of a sudden, Princess Diana seems less “fluffy” and her concern about land mines more urgent.

I also learned about The Plain of Jars through No Reservations. Initial research of the Plain of Jars in the early 1930s suggested that the stone jars are associated with prehistoric burial practices and is dated to the Iron Age (500 BCE to 500 CE). No one really knows for sure how these giant jars got there or what the purpose was. It’s the Stonehenge and/or Pyramids of Southeast Asia. Fascinating, right? I’m always stunned that ancient Peoples would actually have time to take on huge projects like this! Wasn’t day-to-day life challenging enough? Were they artisans who were paid or was this some kind of forced labor?

But also I learned of the great natural beauty of Laos, haunting in its eerie foggy mist over the Mekong. I want to go there and see for myself.

Mali Under the Night Sky: A Lao Story of Home written and illustrated by Youme [picture book, ages 4-10]

This is the true story of Lao-American artist Malichansouk Kouancho, who walked with her family from Laos to Thailand when she was five years old. It is a universal story of all refugees who flee for their lives to escape war and endure great hardship and loss. Somehow artist Youme has transformed this important story of the refugee (but Lao in this case)  into a picture book appropriate and appealing to young children. If there are classmates who have gone through this kind of experience, this would be a great book to read at home or in the classroom.  Not only does this story help to heal the wounds of war but it helps their friends understand — just a little — what they have been through.

The dedication is so beautiful: “This book is dedicated to every family or part of a family that has ever left a home to find that home is wherever you are.”

Laos: A Journey Beyond the Mekong by Ben Davies

While this is not a middle grade chapter book, it has stunning photo illustrations of Laos.

The Lao people have produced amazing art in the form of meticulously crafted baskets, silver, fabric, woodcarving and more. I found this site that helps Lao Artisans sell their crafts thus improving their quality of life.

Archaeological evidence indicates that gold and silversmithing were practiced from an early date in those areas of modern Laos which once formed part of the Khmer empire (9th-13th centuries). However, significant development of this craft did not take place until the first half of the 16th century, when a class of skilled gold and silversmiths emerged at the royal court of Xiang Dong Xiang Thong (Luang Prabang), most probably under the influence of Lanna, an important early center of gold and silverware production. (Bracelets $100-250 from Orijen; click on image to see more). Woodcarving traditionally served as sculptural art, and with the spread of Buddhism, it assumed an increasingly important role in the production of Buddha images and the carving of temple and palace door frames, pillars, roofs, lintels, and decorative friezes. During the Lane Xang era, skilled carpenters were also employed to produce royal thrones, ornate wooden furniture, royal barges, and other forms of regal and aristocratic transportation such as palanquins and elephant howdahs. By the early 20th century their work had expanded to include the production of high-quality tables, chairs, and cabinets for a growing urban middle class. Buddhist Painting and Sculpture
Though often reflecting craftsmanship of the highest aesthetic quality, traditional Buddhist painting and sculpture was neither conceived nor perceived as art – its sole purpose was to educate and enlighten.

Sa na Paper Handicrafts
“During the Vietnam War however the temples in the province were destroyed by bombing and the monks became farmers and soldiers. After the war umbrellas manufactured in China became available and paper umbrellas became difficult to come by. Only a few older men continued to make them, for their families and friends. The practice of making paper umbrellas was in danger of dying out.
Interest in the umbrellas was renewed in 2001 by Mrs. Somboun Thedtsida, a representative of the Lao Women’s Union working with NAWACOP, a joint project between the governments of Lao and Germany. Mrs. Somboun saw the opportunity to sell the umbrellas as souvenirs and gifts to tourists and encouraged some former producers to begin making them again.As they grew older and their eyesight and dexterity deteriorated many of the original makers stopped producing the umbrellas but the skill was passed down to younger people in the villages. Formerly it was rare to see a “khan nyu” but gradually the umbrellas are reappearing at markets and handicrafts stores around the country.”
from Lao Artisan

The production of woven and embroidered textiles is undoubtedly the most prolific of all traditional crafts in Laos. Produced in many different styles and dyed in a range of different colours according to the geographical provenance and ethnicity of the weavers, silk and cotton cloth is hand-woven on traditional wooden frame looms by the ethnic Lao and most other Tai-speaking ethnicities to create the ubiquitous wrap-round skirts with elaborately bordered hems (pha sin), ceremonial shawls (pha biang), shoulder bags and many other articles of Lao traditional clothing.

UPDATE: Please leave a comment to win Mali Under the Night Sky: A Lao Story of Home. The person with most compelling comment will win. I’ll pick a winner 7 days from now.

Congrats to Stacey of TravelwithBella.com. She won the book!

3 thoughts on “Exploring Laos with Books for Kids, Culture and Art”