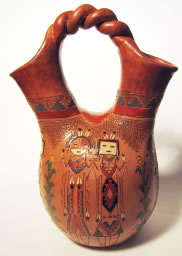 It wasn’t until I read Code Talker by Joseph Bruchac, a great author discovery I made last year, that I knew about the unsung Najavo heroes of WWII. I was only really cognizant of the 442nd Infantry Regiment made up of Japanese 2nd generation Americans because I’m half-Japanese; another group of unsung heroes of WWII with perhaps better P.R.

In eerily similar circumstances, young Navajo Americans were forced to relocate to attend boarding school where great attempts were made by the school to purge them of their ethnic identity, particularly their language. Both children’s books that are featured talk about harsh punishments for speaking in their native tongue. This forced relocation is not unlike the Japanese Americans during WWII. Is this really America, the home of the free?! This is the ugly underbelly that doesn’t get much press coverage.

Am I the only one who didn’t learn about the Navajo Code Breakers at school in U.S. History? I am glad for these books to teach a new generation, and our nation, that the differences that make us unique make our country more powerful. Imagine if that boarding school were successful in wiping out the Navajo language? It’s really not inconceivable if the timing of the war were different!

“Navajo is quite complex, with a large variety of noun classes including “animate”, “round object”, “long, stiff object” and “granular object”. Very simple verbs in Navajo may translate into many words in English; for instance, the verb si’ means “to cause a hafted object to move” or, more practically, “to practice archery”.

There are four phonemic vowels in Navajo: a, e, i and o; each of these may occur long, nasalised, or with one of four tones: high, low, rising or falling. Various combinations of these features are also possible.”

The Navajo Code Talkers invented their own code based on the Navajo Language. I read a story somewhere that the Japanese had captured a Navajo soldier who was not a Code Talker. They tortured him to get him to break the code. Since he didn’t know the code, he translated the words and said, “They’re talking about breakfast.”

So the Navajo heroes should be commended both for their bravery in battle and they were always at the forefront of the action AND for their ability to construct an unbreakable code based on their language. The construction of the code was just as important as the basis for the code.

“Two methods of communication emerged. The first rested squarely on a “words for alphabet” system. Certain terms, particularly names, could not easily be given a specific code word. Simply trying to affix an Indian word to each of the Pacific islands on which Marines would land proved futile. Under the alphabet method, each of the twenty-six letters of the English alphabet would be represented by an Indian term. For example, the island Tarawa would be transmitted as “turkey-ant-rabbit-ant-weasel-ant.” In Navajo, the words would be pronounced “Than-zie, wol-la-chee, gah, wol-lo-chee, gloe-ih, wol-la-chee.” To avoid repetition, which would make the code penetrable, letters carried multiple terms. The letter “a” also stood for apple (be-la-sana) and axe (tse-nihl). A “t” was represented by tea (dah) and tooth (awoh). In this fashion, the code talkers created forty-four words for letters in the alphabet, the most numerous variations given to those vowels and consonants most frequently repeated. Tarawa, then, might be coded as “dah, be-la-sana, dah-nas-tsa, tse-nihl, glowih, wol-la-chee.” from NavajoPeople.org

“In recognition of their dedicated service to America during World War II, the Navajo code talkers were awarded a Certificate of Appreciation from the President of the United States in December 1981. Their unique achievements constitute a proud chapter in the history of the United States Marine Corps. Their patriotism, resourcefulness, and courage also have earned them the gratitude of all Americans. from Navajo-Arts.com

And let us all spread the word of these unsung heroes!

Both these books do a beautiful job telling the story of the Navajo Code Breakers for different age groups.

At the back of the book, the original code with pronunciation is listed along with highlights of the code. Try using this code for a great project for a children’s book club or home school project.

DesignTrackMind always encourages me to show some “eye candy” about a culture. The Navajos have a rich tradition of gorgeous, collectable art in the form of blankets, jewelry and pottery. 4 thoughts on “The Navajo Code Talkers of WWII”