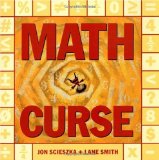 I saw this book during Curriculum Night at my elementary school in my 3rd grader’s classroom.  I flipped through it and then bought my own copy because Jon Scieszka of Henry P. Baloney is one of my son’s favorite authors (and mine too!) and Lane Smith is a really talented illustrator.  I first noticed Lane’s work on the unfinished script of Dr. Seuss’s last book, Hooray for Diffendoofer Day!, and he did an amazing job of combining Dr. Seuss’s sketches with his own illustrations.  Also, anyone entrusted with Dr. Seuss’s last, unpublished work must have been carefully selected!

Math is subtlety presented throughout this book.  For example, the boy in the story’s teacher who starts his math curse by proposing that everything you think about can be a math problem is named Mrs. Fibonacci.  The science teacher is Mr. Newton so I had a suspicious feeling that this name was not randomly selected.  I looked up Fibonacci in Wikipedia and this is what it says… In mathematics, the Fibonacci numbers are the numbers in the following integer sequence:

By definition, the first two Fibonacci numbers are 0 and 1, and each subsequent number is the sum of the previous two. Some sources omit the initial 0, instead beginning the sequence with two 1s.  This is a problem in the book which I failed to solve.  My dad who was a math professor would be so disappointed!

And so, the wild ride of everything in this boy’s life becoming a math problem begins:

All is well until his science teacher, the good Mr. Newton,  proposes that … “Everything can be seen as a science experiment!!.”  Uh oh!

My five-year-old can’t even do half of the math in this picture book but he’s enjoyed this book so much that we’ve read it every night for a week and he insisted that I blog on it.

My son is also a big fan of Jon Scieszka and counts The Stinky Cheese Man and Henry P. Baloney as faves!

Henry P. Baloney is a fun story about an alien boy trying to explain why he’s slightly late for school.  The book uses words from more than two dozen foreign languages that kinda sorta sound like the word you’d think would be in the story so it’s really fun to figure out and say the words. Lane Smith also illustrates this book for another winning combination! Hooray for Diffendoofer Day! is a celebration of teachers who don’t teach to state standards but to expand a child’s world and mind.  It’s good stuff!

The Stinky Cheese Man is a funny twist on nursery stories with the winning combination of Jon Scieszka and Lane Smith.