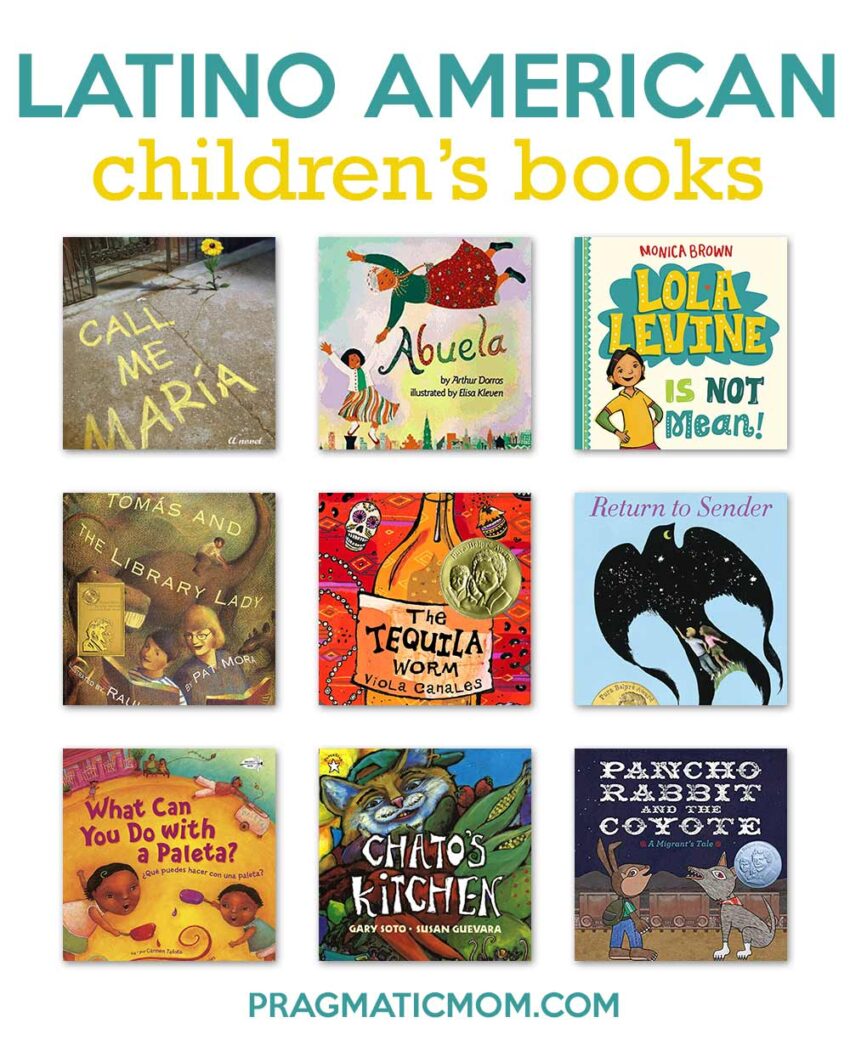 It’s Hispanic Heritage Month now during the month of September so I am barely squeaking out this list in time to celebrate Latino/Latina and Hispanic culture with children’s literature.  Por favor, disfrutar de. (Please enjoy!).

What are your favorite books to celebrate Hispanic Heritage Month? Please share!

10. Call Me Maria: A novel in letters, poems, and prose by Judith Ortiz Cofer

A lyrical and gorgeously written surprise-of-a-novel of a young girl’s journey to assimilate in America with her American-born father while leaving her mother behind in Puerto Rico.  [chapter book, ages 8-14]

A little girl imagines that she and her grandmother fly over the sights of New York City. [picture book, ages 2-8]

7. Tomas and the Library Lady by Pat Mora

A true story about a boy whose family are itinerant farm workers and the kindness of a librarian who introduces him to a whole new world of books.  [picture book, ages 4-8]

6. The Dreamer by Pam Munoz Ryan

This is the book that introduced Pablo Neruda, a Nobel winner for literature, to me (which doesn’t say much about my literary chops).  Ryan writes about a fictionalized young Pablo who has a loving stepmother and an overbearing, rather nasty father. [chapter book, ages 8-14]

14-year old Mexican American Sophia wins a scholarship to a posh boarding school.  This book warmly describes the struggles of fitting in as well as the warmth and closeness of her family and barrio life. [young adult fiction, ages 12-16]

4. Return to Sender by Julia Alvarez

This book is so relevant today on the politically inflammatory topic of immigration.  It plays out in Vermont with the two stories that intersect:  dairy farm owners who are in desperate need of help and Mari’s illegal migrant worker family. [Young Adult fiction, ages 10-16]

3. What Can You Do with a Paleta? by Carmen Tafolla

A paleta is a Mexican Popsicle and this gorgeously illustrated picture book portrays the glorious wonders of the paleta as well as life in their barrio (neighborhood). [picture book, ages 2-8]

Chato the cat (Chato el Gato) lives in the barrio in east L.A.  He makes a big dinner (la cena) and invites his new neighbors (las vicinas)  to dinner, Los Ratons  (mice).  Is the dinner for them, or are they the dinner?  Read on amigos! [picture book, ages 4-8]

p.s. If you can read this book with an East L.A. cholo accent like my husband (mi esposo), you’re a rock star!  And your kids will giggle like mad.

My oldest daughter’s favorite book about a well-to-do Mexican girl who immigrates to America and must work as an itinerant worker.  [chapter book, ages 8-12]

Young Pancho wants to find his papa who is long overdue from traveling North in search of work. After packing his father’s favorite meal, he sets off and meets a coyote who offers to help for a fee. After the coyote consumes the food, Pancho realizes that the coyote is still hungry and makes his escape. This is the perfect picture book to introduce the issue of undocumented immigrants and the perils that they face to children. [picture book, ages 6 and up]

I don’t see multi-cultural graphic novels very often and this one works doubly hard. It’s a younger graphic novel for ages 7 and up and it also has an important environmental message that kids CAN make a difference in their own neighborhoods. Luz’s barrio is hit with rising gas prices and power outages which makes her think about sustainability. She wants to transform a deserted lot into a community garden but can she do it alone? [graphic novel, ages 7 and up]

The sequel continues the environmental message. This time, Luz and her friends investigate why the swimming pond in Friendship Park has dried up. It’s true that there is a drought and everyone is trying to conserve water but perhaps the manufacturing plant nearby has something to do with it. What can one kid do about this? If it’s Luz, then the answer is a LOT!

Perhaps only Margarita Engle could tell us this story, that of costs to the rainforest and human lives sacrificed, because of her background as a botanist. Her novel in verse also brings to light the relatively unknown Apartheid-like system enforced for those working to build the canal: the darker the skin, the less you make.

The costs of building the Panama Canal engineering marvel are subtly presented in this novel-in-verse and will likely cause the reader a little anxiety in thinking about this new, big expansion. And so it should! [novel in verse, ages 8 and up]

Jazz Owls: A Novel of the Zoot Suit Riots by Margarita Engle, art by Rudy Gutierrez

A great review by The Children’s War:

“Jazz Owls tells the story of a not very well-known part of American history is a novel told in free verse. It is told mainly in the voices of Marisela, Lorena, and Ray, and to a lesser extent, by their Papá, Mami, Abuela, different reporters, sailors, police, and even the spirit of José Díaz. It sounds confusing, particularly since this is a relatively small volume, but each is realized to the extent that they need to be and plays a pivotal part in the narrative.

Jazz Owls is a work of historical fiction based on real events and gives readers a window into the lives of patriotic Mexican Americans living in California during World War II. By interrupting and interrogating the predominant narrative in much the same way that books about the lives of African Americans, Japanese Americans, and Chinese Americans do, it draws attention not only to the roles they played in helping to win the war, but also the unmitigated bigotry they were made to deal with on a daily basis.

Jazz Owls is a much-needed addition to the body literature about WWII historical fiction based on a real event, and I believe today’s readers may be surprised at how much the story of a Mexican American family and the racial hate they faced that led to the Zoot Suit Riots will most certainly resonate with them.” [young adult, for ages 12 and up]

I failed to include this because I read it as an adult (and loved it, of course) but failed to realize that it’s for ages!

“Acclaimed by critics, beloved by readers of all ages, taught everywhere from inner-city grade schools to universities across the country, and translated all over the world, The House on Mango Street is the remarkable story of Esperanza Cordero.

Told in a series of vignettes – sometimes heartbreaking, sometimes deeply joyous – it is the story of a young Latina girl growing up in Chicago, inventing for herself who and what she will become. Few other books in our time have touched so many readers.” [ages 10 and up]

“This stunning collection of stories offers an unsentimental glimpse of life among the immigrants from the Dominican Republic–and other front-line reports on the ambivalent promise of the American dream–by an eloquent and original writer who describes more than physical dislocation in conveying the price that is paid for leaving culture and homeland behind.” —San Francisco Chronicle [YA, ages 14 and up]

Junot Diaz has been accused of sexual misconduct:

After allegations of sexual misconduct, Junot Díaz is a cautionary tale on the trouble with tokenism

Author Junot Díaz Responds to Accusations of Sexual Misconduct and Verbal Abuse: ‘I Take Responsibility for My Past’

Ani Castillo was born and raised in Mexico and currently living in Canada. The only reason why this is not an #OwnVoices book is that the theme is universal and not specific to Latinx culture. I like that it’s a “karma is real” message that what you put out into the universe will be returned to you. She puts this abstract idea into a concrete form using ping pong as a metaphor. It’s still a complex idea for children to understand but it’s an important message of kindness, respect, and reflection. [picture book, ages 5 and up]

The Cazuela that the Farm Maiden Stirred by Samantha R. Vamos, illustrated by Rafael López

Normally I find cumulative stories excessively repetitive and downright boring — the most famous of these being This is the House That Jack Built — but I actually don’t mind The Cazuela that the Farm Maiden Stirred. Perhaps it’s the vibrant artwork? Or it could be the Spanish words interspersed throughout? Or maybe it’s that they are making Arroz Con Leche and you can too?! Recipe provided!

Can shoes in a mysterious box left for Freddie Ramos give him Zapato Power? And what will he do with this new superhero power of super speed? This is an engaging multicultural easy chapter book series for boys who think about superpowers! [easy chapter book, ages 6 and up]

The slave of the famous painter, Velazquez, Juan de Pareja teaches himself to paint and wins his freedom and the respect of his great master. Winner of the 1966 Newbery Award. [chapter book, ages 8-12]